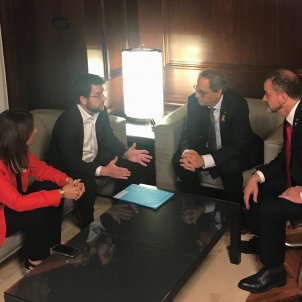 President Quim Torra, Vice President Pere Aragonès and ministers Alfred Bosch and Meritxell Budó met this Friday at the Parliament, coinciding with this week's plenary session, to decide on the response of the Catalan executive with regards to foreign minister Josep Borrell's spying on Catalan external delegations, as exposed in Catalan TV channel TV3 this Wednesday

At the end of the Cabinet meeting, the executive has issued a statement requesting the "resignation" or "cessation" of minister Borrell, and announced that "in the coming hours they will address a letter signed by the Catalan president and foreign minister Bosch to MEPs and European and international chambers, exposing the concern and the claim made in this case ".

It has also been agreed to present allegations against the request for precautionary measures requested by the Spanish government in order to stop the activity of the Catalan government delegations in Berlin, Geneva and London. In the statement, the government also shows its "absolute support" to the delegates affected by Borrell's espionage and describes the information as "scandalous" and "improper of a democratic rule of law."

The meeting came after news this Tuesday revealing that the Spanish foreign ministry had spied on Catalan government delegations abroad for months, especially focusing on the headquarters in London, Geneva and Berlin.

Bosch had already referred to this fact this Wednesday morning during the control session in the Government, where he accused Borrell of "democratic scandal" and of using the "sewers" of the State with the "aim to coerce the foreign action" of Catalonia and enact the closure of Catalan government delegations abroad.

The Spanish embassies in the United Kingdom, Switzerland and Germany were asked to follow activities involving the international projection of the Catalan independence process closely, and to produce reports of such actions allegedly carried out by the Catalan delegations and the Catalan foreign minister, Alfred Bosch. 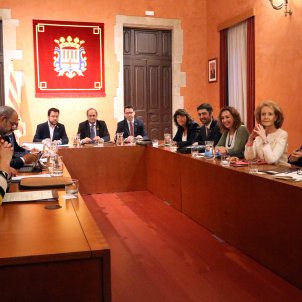