As of today, the imprisonment of Oriol Junqueras, Jordi Sànchez and Jordi Cuixart is before the United Nations Working Group on Arbitrary Detention. The announcement was made from London this Thursday by prestigious British lawyer Ben Emmerson, an expert in international law and human rights. This new initiative by the defence council of the three Catalans comes exactly four months after last year's independence referendum.

Specifically, Emmerson, who was United Nations Special Rapporteur on Counter Terrorism and Human Rights, has lodged an application with the Working Group alleging that the preventive detention without bail they are serving violates the Universal Declaration of Human Rights, which the Spanish state is a signatory to. He showed himself optimistic about the application, believing that there is more than sufficient evidence to find Spain guilty. "This is a classic case of arbitrary political detention," he said. He said that the case severely affects political plurality, because it wants to make them "abdicate their ideas".

Emmerson explained that Joaquim Forn not forming part of the appeal follows a personal decision by the former minister, who resigned as a deputy and decided to stop with his political activity. Forn is following his own, separate defence strategy.

According to Emmerson, there is clear evidence that the deputies' fundamental rights are being violated, including their rights to freedom of association, freedom of expression, political opinion and participation in public life, discriminating against them "because of their advocacy for the rights of the Catalan people to self-determination". He said that the charges against them as "unsustainable" and "purely political".

In the coming days, the UN body will inform the Spanish government that it has received the application and is starting an investigation. Experts will analyse Emmerson's argument, and come to a verdict in the coming weeks or months. Whilst any conclusion is not binding, it does carry weight in international courts. The working group has considered cases of human rights violations in countries like Venezuela, Rwanda and Iran. The same group declared, two years ago, that Julian Assange, secluded in the Ecuadorian embassy in London, had been arbitrarily detained. 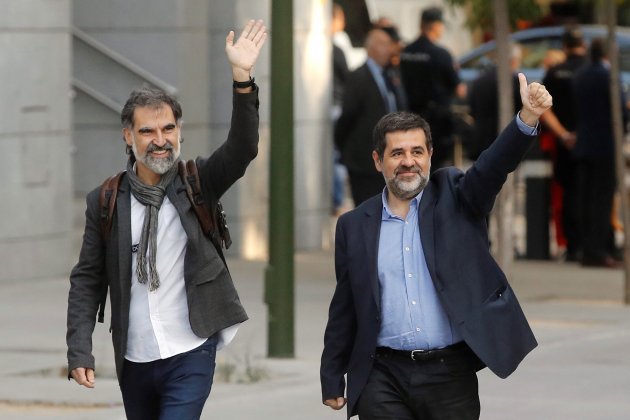 "Imagine if this happened in Scotland"

"We're hoping for a clear statement from the group", said Emmerson, which would put "political pressure" on the Spanish state to change course. He warned that the imprisonments "belong to a long-bygone era of Spanish history".

The British lawyer warned that this case in Spain could prove a "dangerous precedent" against the right to peaceful protest around the world. He reiterated that the crimes they are accused of require a violence which didn't take place, and noted that since 2005 it hasn't been a crime to hold a referendum in Spain.

"Imagine for a moment that the United Kingdom imprisoned the leaders of the Scottish National Party for advocating the independence of Scotland," he said, "that is the situation that we are here confronted with".

For her part, the lawyer Rachel Lindon said that "Spanish authorities are acting like a dictatorship, imprisoning their political opponents and refusing to release them until they renounce their political beliefs and abandon their roles”.

Ben Emmerson has previously represented Maria Litvinenko, the wife of former Russian agent Alexander Litvinenko, who died in London in 2006 after being poisoned. He also led the defence of Moazzam Begg, a British citizen who was arrested and charged over alleged "terrorist activities related to his alleged actions in the Syrian Civil War".

It was a UN special rapporteur who warned the Spanish government that the so-called "ley mordaza" ("gag law", changing public security legislation) threatened human rights and individuals' fundamental liberties, as well as rights to demonstration and expression.