The speaker of the Catalan Parliament, Carme Forcadell, has this Thursday accepted the application of article 155 of the Spanish Constitution and the resulting dissolution of the Parliament in front of Supreme Court judge Pablo Llarena. She has also explained the legal consequences that, in her opinion, the unilateral declaration of independence passed in the chamber on 27th October should have.

Specifically, she said that the declaration was "declarative and symbolic", legal sources have told ElNacional. The comment came in response to a question from the prosecution, which could prove meaningful when they decide what to ask the judge for by way of cautionary measures, particularly in terms of asking for preventive detention or not, and could impact the judge's decision on whatever request they do make.

The other members of the Parliament's Board that have been questioned so far, Lluís Maria Corominas, Lluís Guinó and Anna Simó, have all followed the same line.

Spain's Attorney General, José Manuel Maza, said earlier this week that the cautionary measures the Public Prosecutors' Office would ask for would depend on their statements to the Supreme Court. Regarding the preventive detention without bail ordered for eight Catalan ministers last week, he suggested that, if they had complied with the Constitution and application of article 155, "maybe something would have changed".

Forcadell spent two hours and 15 minutes testifying, starting at 9:50am and replied to everyone's questions. These included the questions posed by the Public Prosecutor, the agency themselves have confirmed, and an exhaustive interrogation by her own lawyer, Andreu van den Eynde, who last week asked for an adjournment to prepare their defence.

Carme Forcadell's strategy of replying to all questions is a marked difference from the ministers, except Santi Vila, last week, who called on their right to remain silent.

Forcadell argued that she has always allowed debate without prejudging the result or controlling the contents, to preserve the right to parliamentary activity and free debate. She said that to avoid a parliamentary debate would have been to fail to comply with the legislation pertaining the Parliament's Board, international law and the principles of the democratic state.

She also argued that she has always fulfilled her role as speaker in defending the Parliament's sovereignty and fundamental rights like freedom of speech and the deputies' right of initiative. She explained that, as speaker, she cannot run detailed checks on parliamentary initiatives. The speaker has no recognised right to block votes.

Regarding the Constitutional Court, she argued that it cannot act preemptively as a filter or censor, rather it should always act a posteriori. She also said that she has always promoted that demonstrations and political projects should be peaceful, that the path of non-violence is the only way possible to make them a reality.

The Public Prosecutor will make its request for cautionary measures after all the Board's members have testified today. As such, the hearings to decide whether Forcadell and her colleagues will go to prison or not, depending on the prosecutors' request, will be conducted last. There is no reason it has to be today, because the Supreme Court had set today and tomorrow for the testimony and to come to their decision.

Lluís Corominas, facing accusations over his votes and accepting into consideration for debate and vote the Laws of the Referendum and of Transitional Jurisprudence as first deputy speaker of the Board, testified during some 50 minutes. His successor, Lluís Guinó, spoke for 45 minutes, Anna Simó for one hour, 15 minutes.

After a break for lunch, the court will hear Ramona Barrufet and Joan Josep Nuet.

Spanish police held a group of spontaneous protesters who shouted, as the deputies arrived, "independence supporters, terrorists" and made them leave once all the accused had entered.

On the other hand, another group shouted "you're not alone". This was the support group for the deputies which had last week gone to the National Audience while the ministers were testifying. 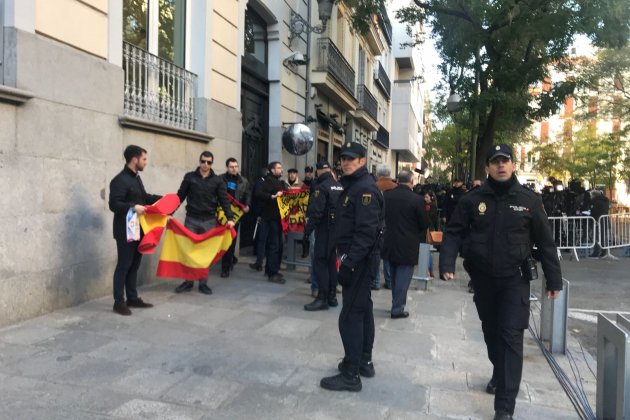 Inside, the deputies waited their turns to testify. Carme Forcadell's decision to respond to all questions, the opposite of vice-president Oriol Junqueras and other ministers last week, is the same strategy she used in previous statements to the Supreme Court of Justice of Catalonia. 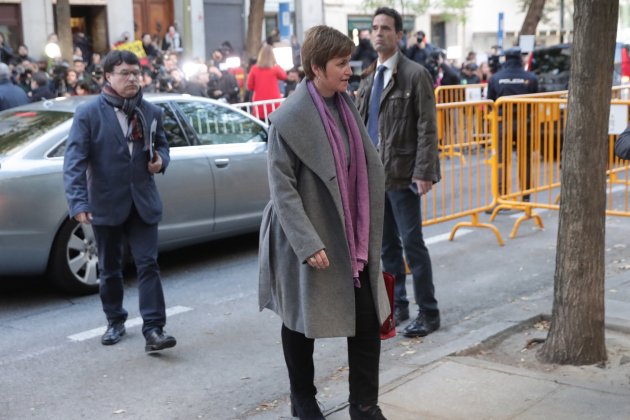 It's expected that the prosecutors will ask for preventive detention for them too, although they might include the option of bail, depending on the statements the deputies make. The public prosecutors at the Supreme Court have different criteria to the National Audience, although it's most probable that there request will not prove too different.

It also seems that the prosecutors could apply the same criteria to Josep Maria Nuet as their colleagues did to Santi Vila last week and request a relatively low bail.

There is also a pending question of whether the Supreme Court will move to bring together all the open cases relating to the referendum. This could affect those already behind bars, the ministers put into custody last week, and Jordi Sànchez and Jordi Cuixart who have now spent almost a month in prison.