So that's a yes: the Mossos acted well during the referendum

Three magistrates from the Barcelona Provisional Audience have handed down a ruling referring to the actions of the state's security forces (particularly the Civil Guard) at a school in Sant Joan de Vilatorrada during the 1st October Catalan referendum in which they establish that police excesses took place and their actions were not proportional, something which the police commanders didn't consider when they used batons and defences and hit members of the public without there being prior physical aggression towards themselves. The verdict asks something very logical and which has been missing these last few months: why police leaders didn't consider that achieving their objective (stopping the vote) made it highly probable that injuries would occur, as indeed happened at the mentioned polling station, where 14 were wounded. Nor did they take into account, the report says, the harm to the institutions' image.

The 14 pages of text from the Barcelona Audience have enormous importance because they take us back to a debate which took place months ago with respect to the proportionality of the polices actions. Specifically, of the Civil Guard and National Police Corps on one side, and the Catalan Mossos d'Esquadra on the other, as that 1st October they acted differently. In the face of the violence from the Civil Guard and Spanish police officers, the Mossos collected ballot boxes from those polling stations where they could do so without using violence.

Civil Guard colonel Diego Pérez de los Cobos, today a general, in charge of the police operation on 1st October after the de facto intervention of the Catalan police force, has always rebuked that action by the Mossos. In fact, Mossos "major" Josep Lluís Trapero and the rest of the senior police leadership are under investigation at the National Audience court accused of crimes as serious as rebellion, for which prosecutors are asking for 11 years imprisonment. It's true that they're different courts but, given the meaningful criticism from the Provincial Audience towards to the Civil Guard and National Police, it's not out of place to ask where was proportionality. Those of us who've argued that the Mossos acted correctly that 1st October have today more arguments to do so.

Editorial Ribó and the comparison of Turkey with Spain José Antich 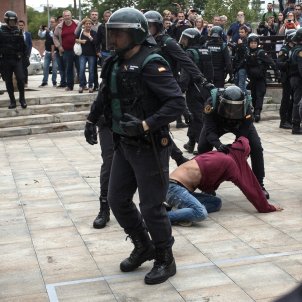