The mobilisations are back

Catalan politics has been moving since Thursday on four different news levels: the members of the Catalan government held in Madrid prisons, the members exiled in Brussels, the demonstrations seen in the last few hours and those planned for next week and the preparations for the 21st December elections. The impact of vice-president Oriol Junqueras and seven ministers being sent to prisons in the Community of Madrid, in Estremera and Meco, has been enormous. A hammer blow that will pursue ever more Spanish democracy and the generation of politicians and thought leaders who have preferred the judicial and police solution to a political solution. I know that this isn't the talk today in Madrid and, on the contrary, there's a mistaken perception of having squashed the Catalans. Of having decapitated the pro-independence bloc which, overnight, has lost all its Chiefs of Staff. The independence movement has more than shown its ability to regenerate which refutes this analysis.

The second level is the government in exile. Judge Carmen Lamela has ordered the detention of president Puigdemont and of the ministers who have stayed with him in Belgium, in theory, Toni Comín, Meritxell Serret, Clara Ponsatí and Lluís Puig. The European Arrest Warrants were filed for crimes of rebellion, sedition, misuse of public funds, malfeasance and disobedience and the Belgian federal prosecutor could send the documentation to an instructing judge this very weekend. There will then open a scenario, in the beginning uncertain, for both sides. When they are summoned, Puigdemont and the ministers will present themselves before Belgian justice. What will the judge's attitude be? Will they send them to prison or let them remain free? In either hypothesis, the decision on their extradition will not be immediate, since the judge has up to two months to make a decision. Given that the president and ministers who have taken the path of exile have emphasised that they don't want to elude justice, rather want to denounce the partisanship of Spanish justice, the decisions that Belgium take at every step will have an important impact on the ministers imprisoned in Madrid.

The demonstrations. Forever the independence movement's great card, able so far of overcoming all the challenges it has been set. This Friday, it has filled the main squares in numerous cities around Catalonia in a new show of strength. The challenge of turning the coming 11th November into something like the "Diada" Catalan National Day every 11th September is the next objective of pro-independence organisations ANC and Òmnium. In the middle there will be "the general standstill of the country" called in imitation of the one held on 3rd October, two days after the referendum, which brought Catalonia to a stop. The organisers of the "week of freedom" have less time and fewer tools than in previous mobilisations and, as such, it will be a good barometer of the independence movement's capacity to resist. Also to evaluate to what point the existing irritation has a strong component of street mobilisation.

Finally, there are the preparations for the 21st December elections. The independence movement is holding discrete conversations about how they imagine the agreement between the different parties. And the roles to be played in one or more candidacies by Puigdemont, Junqueras, current Parliament Speaker Carme Forcadell, the ministers in prison or in exile and 'the Jordis', in the Soto del Real prison since 16th October. Currently, the most realistic possibility is that no candidacy like the one that happened in 2015 with Junts pel Sí between PDeCAT (Catalan European Democratic Party) and ERC (Catalan Republican Left) takes shape. ERC neither wants it, nor do they see it, as made clear by Oriol Junqueras in the days before he went to prison. Until just hours ago, that was also the position of PDeCAT, although they have now changed tack. Will Puigdemont's step forwards, offering himself as a candidate, have the strength to change the inertia there was? Nobody knows for sure. But time is running out, as coalitions have to be formalised by Tuesday and Junqueras' "political will" has anointed Marta Rovira as the person who has to lead the ERC ship during this period.

Editorial Catalonia, the dignity of a people José Antich 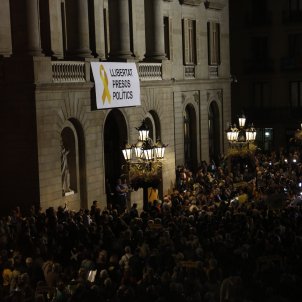