Signs of detente between JxCat and ERC

The visit by the vice-president of the Catalan government, Pere Aragonès, to Waterloo to meet with president Carles Puigdemont and minister Toni Comín too, is an important step in the armistice that the two pro-independence Catalan parties started working on some weeks ago and which they're trying to bring about to agree on a joint road map in two phases: from now until the sentences in the trial over last year's referendum and then after that, once it's known whether the Catalan political prisoners are found guilty not. Aragonès, Esquerra's strongman in the government and the most loyal collaborator of vice-president Oriol Junqueras, in pretrial detention in Lledoners prison and deprived of liberty for 378 days, has travelled to Waterloo for the first time after Junqueras reportedly wrote a personal letter to Puigdemont and ERC emissaries prepared the ground.

The thaw has started with neither of the two parties renouncing anything in terms of electoral strategy, for example, an insurmountable obstacle at this time when they're deeply dug into their positions. The fact that the day before Puigdemont had offered to stand as the number two on a candidacy list for the European election headed by Junqueras would have been at other times rather more than a stumbling block, but on this occasion has proven just another factor. The meeting was, however, very productive, when it comes to rebuilding the confidence that has been damaged badly since last October, and jointly delineating the role of the Council for the Republic in raising the international profile of the conflict, the necessary agreements between the two parties with respect to a referendum, relations with Sánchez's government (once any support for the budget is counted out) and the unilateral path.

A relationship different to that of the last year between the two pro-independence parties will need significantly more than this Wednesday's meeting. There will have to be many more and between many other political leaders from the two parties. Maybe all that's happened is that the enormous ball of disagreements, misunderstandings and annoyance between JxCat and ERC, which has had the Parliament as its main battlefield, has stopped rolling. Shrinking it is the agreed-upon strategy and avoiding it continuing to roll, growing bigger and bigger, the commitment. We'll see now if the incipient text of agreements to adopt holds up and lasts or everything ends up being a mirage in the face of the fight for predominance that always ends up appearing in one way or another.

Editorial How dare he? It was blood, not red paint! José Antich 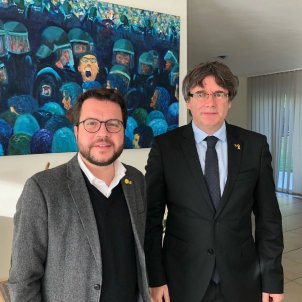