The king: applause, absences and reverences

If one thing stood out about the opening of the XIV legislature of Spain's Congress of Deputies by the king, Felipe VI, it was the absence of the pro-independence parties, about fifty parliamentarians from Congress and Senate representing Catalan parties ERC, JxCat, and the CUP, Basque group EH Bildu and Galician party BNG. This is, in the first place, quite exceptional, as never have so many members of parliament taken part in a boycott of the royal inauguration of the legislature, and above all it has political significance, as the pro-independence parties' support for the Pedro Sánchez government is essential if the Spanish legislature is not to be deadlocked, and both ERC and EH Bildu members facilitated the approval of the Socialist candidate as new prime minister through their abstentions a few weeks ago. They are, then, simultaneously an essential part of the government majority and all of them in opposition to the Bourbon regime, an opposition which has gained political perimeter thanks to the pro-independence alliance, which the other main Basque party, the PNV, has not joined.

The independence parties' indignant protest against the crown forced the PSOE-Podemos government into all kinds of contortions, and also made it cast an eye over a situation it finds uncomfortable, as it shows up the extent of the opposition that there is in Catalonia, the Basque Country and Galicia, aware as the coalition leaders are that the anti-monarchical tendency has been growing for years. The unanimity and silence on the subject during Spain's governmental transition in the 1970s was shattered by the elephant hunts in Botswana and the Princess Corinna affair, which forced the retirement of Juan Carlos I and was a serious blow to the institution in the eyes of public opinion, despite the attempt to stop the hemorrhage through Felipe VI's accession to the throne. Then came the new king's belligerent attitude to the Catalan independence movement, probably the Spanish monarchy's biggest mistake since 1975, since it irreversibly separated him from Catalan society.

In contrast to the attitude of the pro-independence groups, the gesture by members of Unidas Podemos, the political group that emerged from the left wing 15-M movement and which aimed to put an end to Spain's Regime of '78, was striking. There were Pablo Iglesias and the ministers of Unidas Podemos applauding Felipe VI, perhaps as one of the commitments they made to enter the Spanish government. While the party's ministers clapped the monarch from the blue government bench, the ordinary Unidas Podemos MPs stayed unobtrusive in the background, standing still and without applauding, just as they did at the opening of Parliament in 2016. A careful division of labour in which ministers and deputies play different roles depending on whether they are in one row or another in Congress.

That's a problem that is not experienced by the PSOE, PP, Vox and Ciudadanos representatives, who rewarded Felipe VI with several minutes of applause. Nor later in the formal greetings, when the PP deputy for Barcelona, ​​Cayetana Álvarez de Toledo, marchioness of Casa Fuerte, was unrivalled in her overblown genuflective reverence. Some absent themselves making a significant gesture; others applaud and leave the revolution for later; and the right wears its monarchism on its sleeve. Spain, 2020. 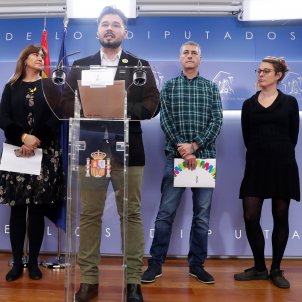 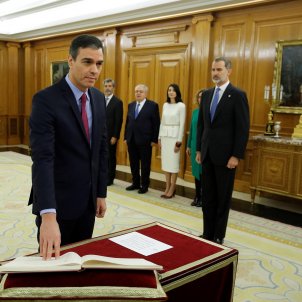