Forn, the candidacy of an innocent man

Minister Joaquim Forn has announced from Lledoners prison his decision to head a candidacy for the mayoralty of Barcelona. Although it's been an open secret for months that Forn was prepared to take this step, the now-declared candidate wanted to be certain he had enough internal consensus, freedom to put together the list of candidates despite his situation of pretrial detention, the support of the current municipal party in Barcelona, acceptance of his programme for the city, and conviction that his defence before the Supreme Court was compatible with such a decision. The phrase "I'm standing because I've got the right to" perfectly sums up the step he's taking. Not accepting the pretrial detention as being injust and responding directly to Manuel Valls, who hours ago described Forn's candidacy as a provocation.

With Forn, the group of headliners who will lead the candidacy lists is complete. Starting with Ernest Maragall, Esquerra's candidate who the polls at present agree on putting at the head of the race. Current mayor Ada Colau is standing again for En Comú, as is Jaume Collboni for PSC. PP are presenting the unknown businessman Josep Bou, which seems a plan to leave the path clear for Ciudadanos; CUP still hasn't announced who will head their list and Jordi Graupera will lead the list that arose from the primaries organised by the Catalan National Assembly. With four months to go to the election, the panorama couldn't be more interesting and only the disproportionate repression from the state towards the pro-independence prisoners is going to prevent high-level debates between the different candidates.

With the option of a joint pro-independence candidacy counted out, the movement has a lot at stake in the Barcelona election. A Valls victory would be a failure for their political project but Colau winning again would clearly place the Catalan capital on the decline in terms of dynamism. In the last few hours, Ernest Maragall and Quim Forn have made gestures to calm both parishes that they do want to reach an agreement after the election. The meeting they had this Tuesday in Lledoners was a clear signal of that, as was Maragall's reaction after Forn's announcement.

The presentation of separate lists should have as its objective to scrape together the maximum number of votes from the areas where they border up against other parties. Maragall, ex-PSC, should aspire to do well in the fishing ground of the traditional left and Forn shouldn't settle for the votes of the extinct Convergència. He was the man who overcame the attacks in Barcelona and Cambrils on 17th August 2017 with flying colours with brilliant action by the Mossos (Catalan police) and he was the key to Xavier Trias's mandate as mayor of Barcelona between 2011 and 2015. His life has always been municipal politics and only his dedication to service led him to accepting the role of interior minister. Now he'll lead a candidacy on a ticket with the Junts per Catalunya's most powerful cog in the Catalan government, Elsa Artadi. It won't be easy at all for the Forn-Artadi pair, since they're starting from a clear disadvantage, but an election is always an unknown quantity. Especially with four months to go.

Editorial MAR, the return of the fascist dinosaurs José Antich 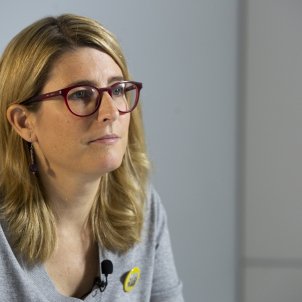 Interview Artadi: "Sánchez must decide if he's in charge or is a puppet of the Spanish state" Marta Lasalas