The independence movement ends the year as it began it: divided

One of the tragedies of the Catalan independence movement is that its leaders are unable to agree on a minimal joint strategy beyond sharing the government of Catalonia. Each movement from one of the two main parties leads to an immediate aggressive response from its partner, which then begins to act like an adversary and electoral rival.

At present Together for Catalonia (JxCat) and the Republican Left (ERC) are fighting their umpteenth battle at a time when there are at least five fronts on which they should be moving in unison: the demand for the release of Oriol Junqueras, after the decision by the Court of Justice of the European Union; the annulment of the pro-independence leaders trial and of the Supreme Court's sentences; the requirement that Spanish courts comply with the European parliamentary immunity, in Spain as well, of Puigdemont, Junqueras and Comín; the Parliament of Catalonia's frontal opposition to the disqualification from holding public office of president Quim Torra by the Central Electoral Commission, which may be the first major battle of the new year; and the acceptance that a hypothetical negotiation by the Catalan government with Pedro Sánchez's new Spanish executive must obviously be led by the maximum authority each side, with president Torra having much to say.

There is a thornier issue, in which it has been known from the start there would be no agreement between the two parties: the investiture of Pedro Sánchez as prime minister and the vote in the Spanish parliament. Given that ERC and JxCat ran for the general election on November 10th with different political positions, neither of them can require the other to do something that breaks their electoral commitment. It is Catalan voters who will judge which made the better decision in the coming months. Another matter entirely is the ongoing struggle to win the battle of public opinion.

All this coincides with a colossal onslaught from the right-wing of the media, the judiciary and politics against the Catalan independence movement. None of the three will ease the pressure and the power of the state will walk in parallel with the government, whose power has been seen to be very relative in more than one issue in recent days. Because the right will not acquiesce after the investiture of Sánchez and the blockage of the legislature will be permanent. And in the middle will be Catalonia, in need of everything that Madrid doesn't want to hear about and that will have to be put on the table: a fundamentally different financing system, a respect for its national, political, social, educational, cultural and economic identity, the referendum and the right to self-determination. Because the political conflict between Spain and Catalonia exists. Catalan independence knows it and so does Spanish nationalism.

Thus ends the year and thus begins 2020. The end of a year marked by the unjust sentence of the Supreme Court and the repression, and the dawn of another in which, once again, we have to trust that Europe continues to open the way to justice in the face of the violation of fundamental rights by Spain. 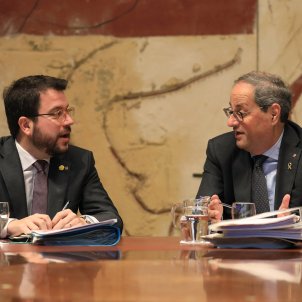