First they create the story...

It's several days now that we've seen it coming. In fact, during Holy Week there were enough statements from political leaders who, talking about the political situation in Catalonia, drawing on two topics: the CDRs (Committees for Defence of the Republic) -and their systemic violence, comparing it with the kale borroka1-, and the need to control Catalan public broadcaster TV3, the attraction to take over it at whatever price being directly proportional to its growing lead among public and private television channels. The strategy, as such, is neither unknown nor new. It's already happened with the supposed violence in the gatherings in front of the Catalan economy ministry on Barcelona's rambla Catalunya, which ended with no one injured but which are keeping in Soto del Real prison near Madrid Jordi Sànchez and Jordi Cuixart. At that time, in September, they were the leaders of the Catalan National Assembly and Òmnium Cultural, now they are accused of rebellion by Supreme Court judge Pablo Llarena.

If we look at the news archives, both from papers and radio and TV, the procedure is the same: first they create the story and then the public prosecutor takes action. In this case, no less than the National Audience court on the first working day after Holy Week, as Easter Monday isn't a public holiday in Madrid. Let's turn back to the archives: in the campaign to denounce the CDRs you can find important leaders from PP and Ciudadanos and, more recently, from PSOE. Even the leader of Catalunya En Comú, Xavier Domènech, has gone as far as stating that "the CDRs' violence doesn't help", words he corrected hours after the interview in question, noting his error and advocating for "no criminalisation of public protest". The public prosecutors' statement already suggests hypothetical crimes by the CDR, including rebellion and subverting the constitutional order.

We've always said it and it's been commonly recognised by all: if the Catalan independence movement has a common characteristic running through it it's non-violence. It's made this clear this infinitely often. Even when the possibilities, although remote, foresaw the contrary. 1st October (referendum day) was a clear example of this when the most common response to the repression was protecting the ballot boxes and protesters putting their hands in the air. Since the first large-scale demonstrations on 11th September (Catalonia's national day), especially since 2014, they've tried to introduce violence into the equation to destabilise the independence movement. The failure has been clear, since violence isn't part of the core of the Catalan independence movement. The serious accusations raised in the public prosecutors' statement and the jump to hypothetical acts of violence and rebellion allows us to draw parallels with the accusations against Sànchez and Cuixart.

And it also gives the impression that they're looking to present the situation in Catalonia and its security as having collapsed. Who knows whether in some office they've theorised that this was going to raise the chances that those in Germany, Scotland, Belgium and Switzerland studying Spain's extradition requests would take this situation into account.

[1] Kale borroka is a term for violent actions carried out in the streets by Basque nationalists. 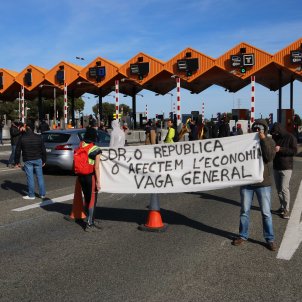