Borrell's call for "disinfection": we have been warned

In an election campaign that is so tense and in which so many disgusting statements have been made, probably none go as far as the words uttered by Josep Borrell, bane of the independence movement since the time when his political star shone in the capital of Spain, and who now, within the Catalonia of dual natures depicted by Madrid, has become a transversal icon for unionism. Borrell, along with writer Mario Vargas Llosa and economist Josep Piqué are the attacking trio presented as an intellectual accompaniment to article 155, going beyond the individual areas of influence of the three unionist parties. "Before closing the wounds, it is necessary to disinfect. For a start, it is necessary to disinfect the media," declared Borrell, and he has not denied it - he has not even qualified it. It is most likely, given his vanity and pride, that he never will. Not because of that is it any less reprehensible that he said it and that the Madrid press has buried it. And if hate crimes were well defined and judicial authorities were independent, there would already be somebody working legally on this.

José Borrell has always been an outspoken politician. A good orator in his years in the Spanish Congress, he was selected to be candidate of the Spanish Socialists (PSOE) for the presidency of the Spanish government at the end of the nineties, but the party and El País worked together to remove him from the Spanish election race due to an obscure corruption issue. From his time in Madrid, there are two memorable moments regarding his relationship with Catalonia: the taxation clean-up that he carried out as State Secretary for Taxation in the middle of the 80s in several Catalan cities, and especially in Manresa, where the business-by-business, house-to-house inspections are still remembered. Also, his time as Minister of Public Works between 1991 and 1996, a period in which the infrastructures investments in Catalonia were even lower than usual.

We have become very used to this sort of language: when Catalan PP leader Albiol spoke about cleaning up Badalona more than two years ago a huge scandal was set off, but now Borrell speaks about disinfecting, about cleaning up or about sterilizing and his words are carried away in the wind. Spanish vice president Soraya Sáenz de Santamaría, who is already, it seems, carrying the weight of a poor result from the PP in this Thursday's election, has herself declared that the reason the independence parties are leaderless and "decapitated" is due to the efforts and grace of Mariano Rajoy. Wasn't it a decision of the justice system? And the separation of powers? In any case, thank you for the clarification.

It is good to have the cards placed on the table before election day so that we know in sufficient time that, depending on the electoral result produced on Thursday, the disinfection will start. We have been warned. 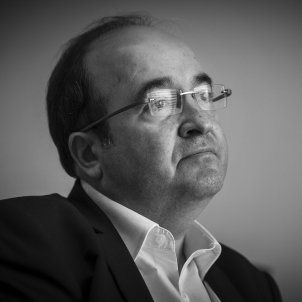 Anatomy of an Instant Miquel Iceta, the Underwood who wants to be a Nyborg Tian Riba