One of the stories of the year (and one of the great embarrassments for justice in Spain) will be, without a doubt, the complete acquittal of Sandro Rosell by the First Section of the Criminal Chamber of the National Audience, announced this Wednesday, and the irrefutable verification of the terrible injustice of his pretrial detention ordered by Carmen Lamela. The court's three judges have signed the sentence acquitting him of the crimes of money laundering and belonging to a criminal organisation, which he had been charged with alongside five others. A complete and total acquittal after having spent 21 months(!) in pretrial detention, giving him and partner Joan Besolí first place on the list of time spent in provisional detention for an alleged financial crime. A crime which has been shown to not have taken place.

Judge Lamela denied him release on bail as many as thirteen times and for life will have to carry a stain on her record which should disqualify her from continuing to flaunt such serious responsibilities. Far from being so, not long ago, when it was already clear there was no great legal case against Rosell, she was promoted to the Supreme Court, the highest court in Spain. And there she remains. And there she will remain. The same judge who sent the Jordis (Cuixart and Sànchez) to prison 555 days ago and who, when the members of the Catalan government she sent to pretrial detention in November 2017 appeared before her, one of them says, didn't pay excessive attention to their statements: "She made a show of ignoring us, looking at her mobile convulsively. She'd already drafted our admission to prison".

It's spine-chilling what's happened to Sandro Rosell and even more so to think about the absolute defencelessness of citizens in such cases. It's not worth making a fuss that judicial independence is what has finally ordered his release, far from it. And the 21 months he's spent behind bars? Is no one responsible for that? It's the only profession in the world where mistakes don't lead to a penalty. When you take measures as drastic as the deprival of someone's liberty for 21 months for the crimes of money laundering and membership of a criminal group, you've got to be very sure the alleged crime was committed. The transient nature of the news in this world we live in will give Sandro Rosell's acquittal a few days or even hours of life. But it's scary, I can find no other word, that this could have happened and that worrying headlines hang over his long stay in prison, closely related to his ideological affiliation and the stance of Fútbol Club Barcelona towards the Catalan Way pro-independence protest on 11th September 2013, the Concert for Liberty held at Camp Nou that same year, or alleged pressure from the United States, bothered that Qatar had got the 2022 football world cup. 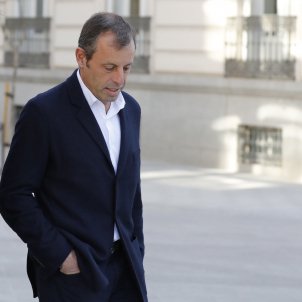