It's very possible that, recently, not even at his most optimistic had Artur Mas i Gavarró, 129th president of Catalonia (2010-2016), thought he could leave the presidency of PDeCAT in a better situation for the party: after the victory of the pro-independence parties in the Catalan election on 21st December with Carles Puigdemont's Junts per Catalonia having won a hard-fought first place over ERC. If on 9th January 2016, he laid aside the presidency of Catalonia, his hand forced by the CUP not accepting him for a third legislature in the role, on 9th January 2018, he stands aside from the honorary leadership of the party having had, for once, a stroke of luck.

In these last few months he had shared reflections around his decision, now public, and in all his calculations the scenario was frankly worse, with PDeCAT not taking off electorally nor being an actor in Catalan politics. The party had, above all, a past. And, in some ways, a heavy burden linked to corruption cases of the disappeared Convergència, which Mas had been secretary general and later president of since 2000. The future of that political party, created in Montserrat abbey in 1974, whatever it was, was blown up by former president Jordi Pujol (1980-23) with his confession in July 2014 about his hidden inheritance which, in the end, resulted in a opening a hole in the party's historical electoral base.

Mas closes a second phase of his public life to prepare his legal defence for the 2014 and 2017 referenda, the first already judged and sentenced by the High Court of Justice of Catalonia (it remains for the Supreme Court to confirm the sentence), and the second in the instruction phase with Mas already cited as under investigation and in which he will probably also be judged by the Supreme Court. Moreover, also for that 2014 "participatory consultation", he has to face the Court of Accounts's indictment, which has seized, among other things, his house. Despite everything, as he said himself, his departure shouldn't be considered a withdrawal from politics, nor is it irreversible in the long-term. Nor is it certain that it would need an alteration, even a partial one, to Puigdemont's politics. Mas felt the long shadow of Pujol as he governed and, from the beginning, made it clear that he would give his opinion if asked and if not would support Puigdemont's decisions. And he has done so.

That doesn't mean that he's agreed with president Puigdemont on everything in the last convulsive months but whatever differences there were, he didn't even express them off the record, nor to close confidants. For those who want to scrutinise every word in his farewell speech, and Artur Mas doesn't have a reputation for being an improvisational politician, maybe it would be worth starting with this sentence: "I've been a politician who first thought of the country, second of the party and third of the individual". And that's it. 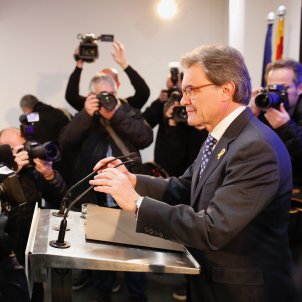