The rebellion will have to be proven, right?

Now that four of the political prisoners have testified (Junqueras, Forn, Turull and Romeva, who between them have spent a trifling 1,678 nights in unjust provisional detention), at least two things should be able to be stated loud and clear: the members of the Catalan government removed from office by Madrid have prepared for the trial infinitely better than the public prosecution and state's solicitor and in very difficult conditions of pretrial detention. So far this is an unarguable truth which is resounding, hour by hour, between the four walls of the courtroom in the Supreme Court where the shameful trial is being held. And secondly, what's happening with the accusation of rebellion? It was to be expected that both the public prosecution and the state's solicitors would try to take advantage of every last option in the charge they've argued for in their provisional filings. And, far from it, they're putting much more emphasis on misuse of public funds. Well, they'll have to prove it, right?

Whilst, during last Thursday's session, Oriol Junqueras made a brilliant political defence statement and Quim Forn a detailed defence of his actions at the head of the interior ministry, this Tuesday, Jordi Turull, at the time presidency minister, has given an impeccable defence of both his management as a member of the Catalan government and, previously, in his role as head of the parliamentary group of Junts pel Sí. The alternated public prosecutors, more incisive than the pair from last week, didn't manage to dismantle Turull's defence, which included the decisive demonstration that there wasn't any violence (even explaining to the magistrates that Catalonia was the country of Pau Casals, although it's not certain that they all understood the message), the political defence of all the actions carried out and the fulfilling of the law in accordance with the electoral manifesto with which they fought the election.

On the other hand, foreign minister Raül Romeva opted for a different line, but one which was just as convincing, closely based on his prestigious CV as a firm defender of pacifism, important actor in various peace agreements in the former Yugoslavia and a recognised author of numerous books on peace processes. The fact that Romeva would only reply to questions from his lawyer to highlight that they are political prisoners followed Junqueras's line, waiting for others to do the same, for example, Jordi Cuixart, Carme Forcadell and Dolors Bassa.

After two days of questioning of the political prisoners, one has the impression that the prosecutors and state's solicitor have decided to hide the topic of rebellion (the greatest sentence) and wait, perhaps, for the witnesses. As the hours pass, it seems as though the nonsense of the provisional criminal classification would struggle to find a basis for itself. How are they not trying to prove it? How can you explain that it's not at the heart of the trial when it's the charge which prevented them from leaving on bail? Because it'll have to be proven, no? More than a year of their lives in pretrial detention demands there be no doubt, something which as of today is very far from being certain. We'll see; we believed that the trial was to determine if there had been rebellion, but the emphasis is being placed more on the alleged misuse of funds.

And a final thought: Why is the trial being hidden from Spanish citizens and why is no TV channel broadcasting it live? Are they scared they'll hear the truth? 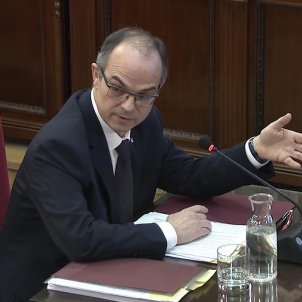 Independence Trial Jordi Turull: "Dressing up as a defender of the Constitution allows you to break it when you want" Gemma Liñán 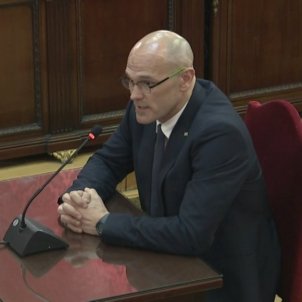 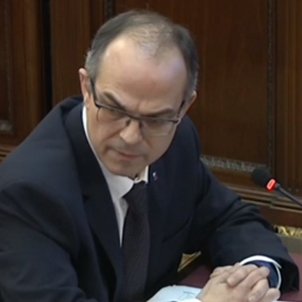