Òscar Escuder: "No language of 10 million speakers is legally as unprotected as Catalan"

The situation of the Catalan language could enter a critical phase if nothing is done to correct current trends. That is the warning being sounded by Plataforma per la Llengua ("Platform for the Language"). In the 28 years since it was founded, this non-governmental organization has become the reference body in terms of defending the linguistic rights of Catalan speakers and promoting the language. Its president, Òscar Escuder, says that Catalans need to recover their self-esteem as speakers of their language. 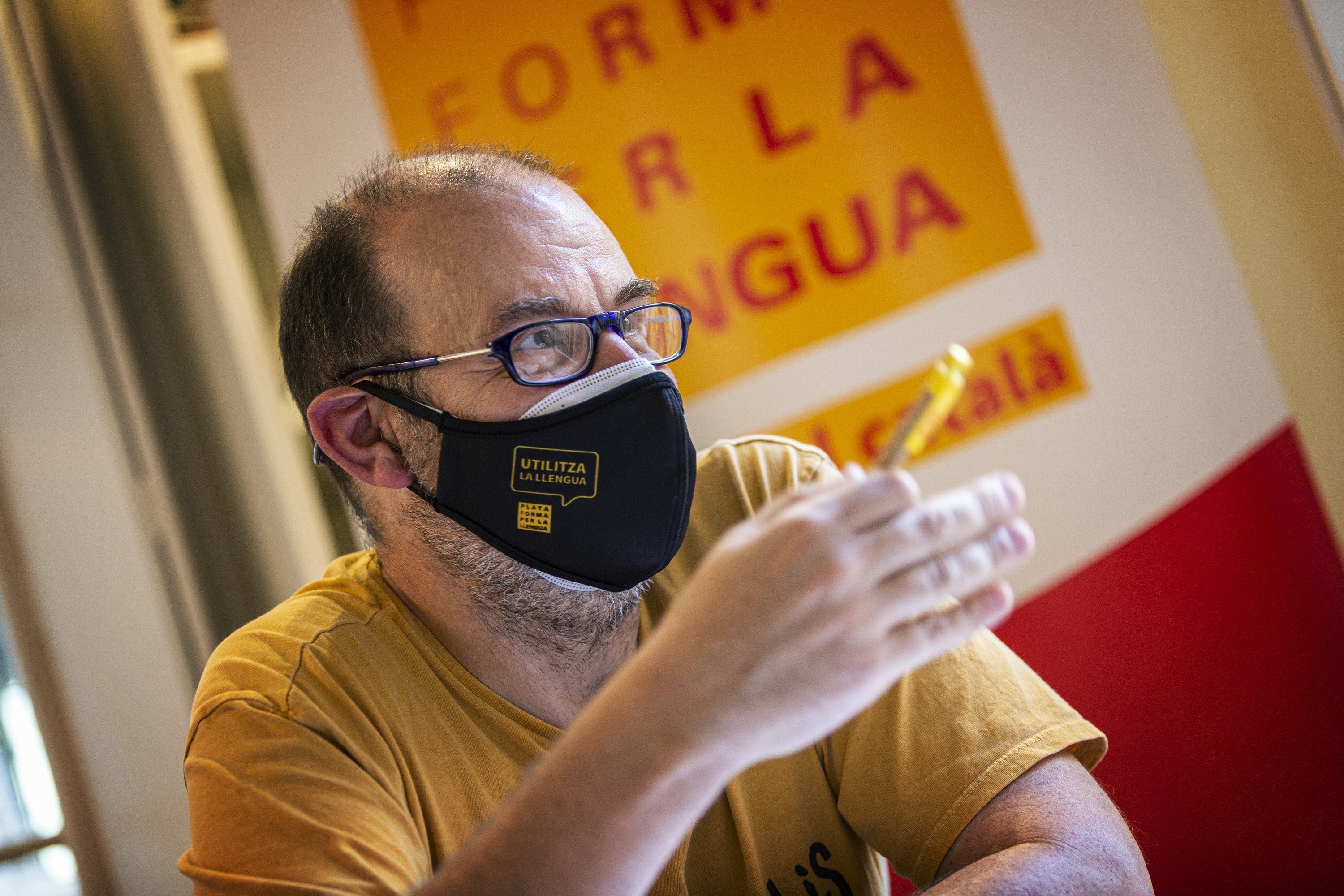 Is Catalan on the verge of disappearing?
It is in a situation that, in Plataforma per la Llengua, we describe as a linguistic emergency. Not in the sense that it is going disappear in just a few years, but there are clear warning signs. It's comparable to the climate emergency: the Earth is not going to become a desert overnight, but we know that we need to take action to prevent this from happening in the future. Our language is at the same turning point, we have to go on the alert and we must face the situation to ensure its survival.

In short, we're running out of time.
We're starting to run out. It’s not about being overly alarmist, but in the last 15 years we’ve lost half a million regular speakers and that’s not a figure to be content about and say everything is going very well. Many times we are made to believe that Catalan is hyper-subsidized and hyper-protected. That is a hyper-lie: it is exactly the opposite. There is no language with 10 million speakers that is legally as unprotected as ours. If we add to all this the low linguistic self-esteem of many Catalan speakers, it creates a cocktail that, if it were a drink... we wouldn't drink it.

The Spanish state would like to be like the French state, but it has not succeeded. And we hope that it won't, because it would mean the homogenization of the territory linguistically.

On the other hand, the statistics show that at this moment in history, more people than ever understand Catalan.
It’s one thing for people to know and understand it, and in absolute terms, the total in that category is the largest it's ever been - but it is a different story if you look at the percentage of people who use it in their daily lives. Only 32% of people use Catalan regularly, probably the lowest proportion in history. This means that we have a very serious paradox, caused by multiple factors. But, in short, Catalan is in a hostile environment.

In fact, you speak of "linguistic supremacism" when you refer to the policies of the Spanish state.
The sensation we have, based on the facts we see, is that the Spanish state would like to be [linguistically] like the French state, but it has not succeeded. And we hope that it won't, because it would mean the homogenization of the territory linguistically, totally reducing the co-official languages [Catalan, Basque and Galician] to folkloric status. If this is not the case and what the Spanish Constitution says is true, and all languages ​​are “cultural patrimony” and “deserve special respect and protection”, then they need to put that into practice. 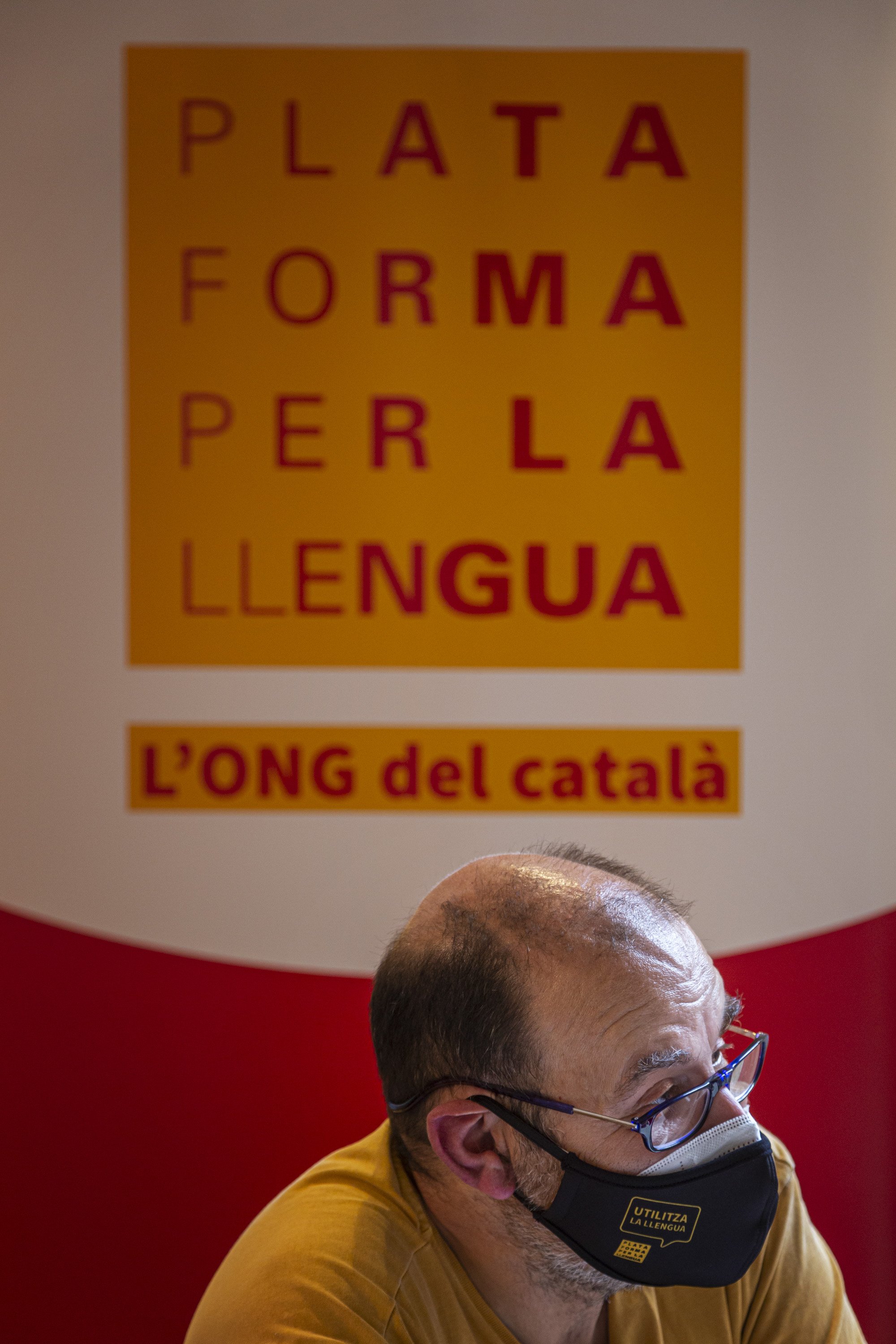 So where should that start?
The proof that this is not just an obsession of ours is that 20 years ago the Spanish state ratified the European Charter for Regional or Minority Languages ​​and it is not respecting it. And it is not just us who say that, the Council of Europe says it, as they evaluate compliance from time to time. There is continued contravention of the Charter and the situation is not improving. This shows that there is no political will, because the aspects to be changed are very clearly identified. They are mostly connected to dealings with public officials, who should at least understand the language of the place to which they are assigned.

In particular, you have registered conflicts in relation to the police and the judiciary.
Many people have had negative experiences in relation to the police and that has shown the public that they may have more problems if they go into a police station to renew their ID cards and speak Catalan, than if they do it in Spanish. Nothing should happen if you don’t change languages [when you address an official], but there are people who make this change preventively. And this applies to all state administrations, especially in justice.

Does the same happen in administrative areas that are run by the autonomous community governments?
In this case, the main focus of complaints is the health area. In theory, all public workers have a duty to be able to guarantee that they can attend someone in Catalan, but in reality this does not apply. We have cases of people who have gone to a doctor or a nurse and they have been refused attention if they speak Catalan; they have been asked by the health professional to change their language - or even insulted. It is quite true that everyone also speaks Spanish, but no one must be forced to switch languages if they don't want to. People are not aware that this [right to not switch to Spanish] is part of our language rights.

One of the most surprising statistics from the InformeCAT 2020 report is that 51% of the inhabitants of Catalonia believe that Catalan, Valencian and Mallorcan are different languages.
It’s basically out of ignorance. An ignorance that has been reinforced by the institutions and administrations themselves. If, whenever you go to an ATM, you see that it differentiates between Catalan and Valencian, this can end up influencing you. And the same goes for the websites of the Spanish state administrations. In 2020 we published a study that showed that 42.9% of Spanish government webpages which have a Catalan version also practice language secessionism. And that's despite the fact that, out of the total number of pages, only 29.6% are partially or residually translated, and 1% are fully translated. These are minor things, but they add up. And if you tell a lie for long enough, people will start to believe it.

In fact, a few weeks ago PP leader Pablo Casado said that the variants spoken in Mallorca, Menorca and Formentera are not Catalan, but different languages.
That's different again. The 51% of people living in Catalonia [spoken of earlier] do not have bad faith in linguistic terms, but in the case of Pablo Casado it is present, because he certainly did not say this out of ignorance. Let him find an academic philology department that says all these languages ​​he named exist. Those people want to divide and to homogenise, in order to make these languages ​​residual. No one would think of saying that what people speak in Buenos Aires and Madrid, or in London and Melbourne, are different languages.

One of the hot spots is the proposed Spanish audiovisual law. The preliminary draft states that streaming platforms will need to have a minimum share of 30% of audiovisual works being European, and that 50% of these must be in one of the official languages ​​of Spain. The Catalan Audiovisual Council demands that, within this 50%, half of the products should be in Catalan, Galician or Basque, as it is considered that in the draft version, the cultural and linguistic diversity in the sector is not taken into account.
We already have little content in Catalan and, if this draft of the law goes through, there will be even less. It is a matter of turning the problem around and going more deeply into it. During the negotiation, the autonomous governments must be clear that it is a red line that cannot be crossed. If not, we'll pay dearly for it. We need to be able to have a normal language. 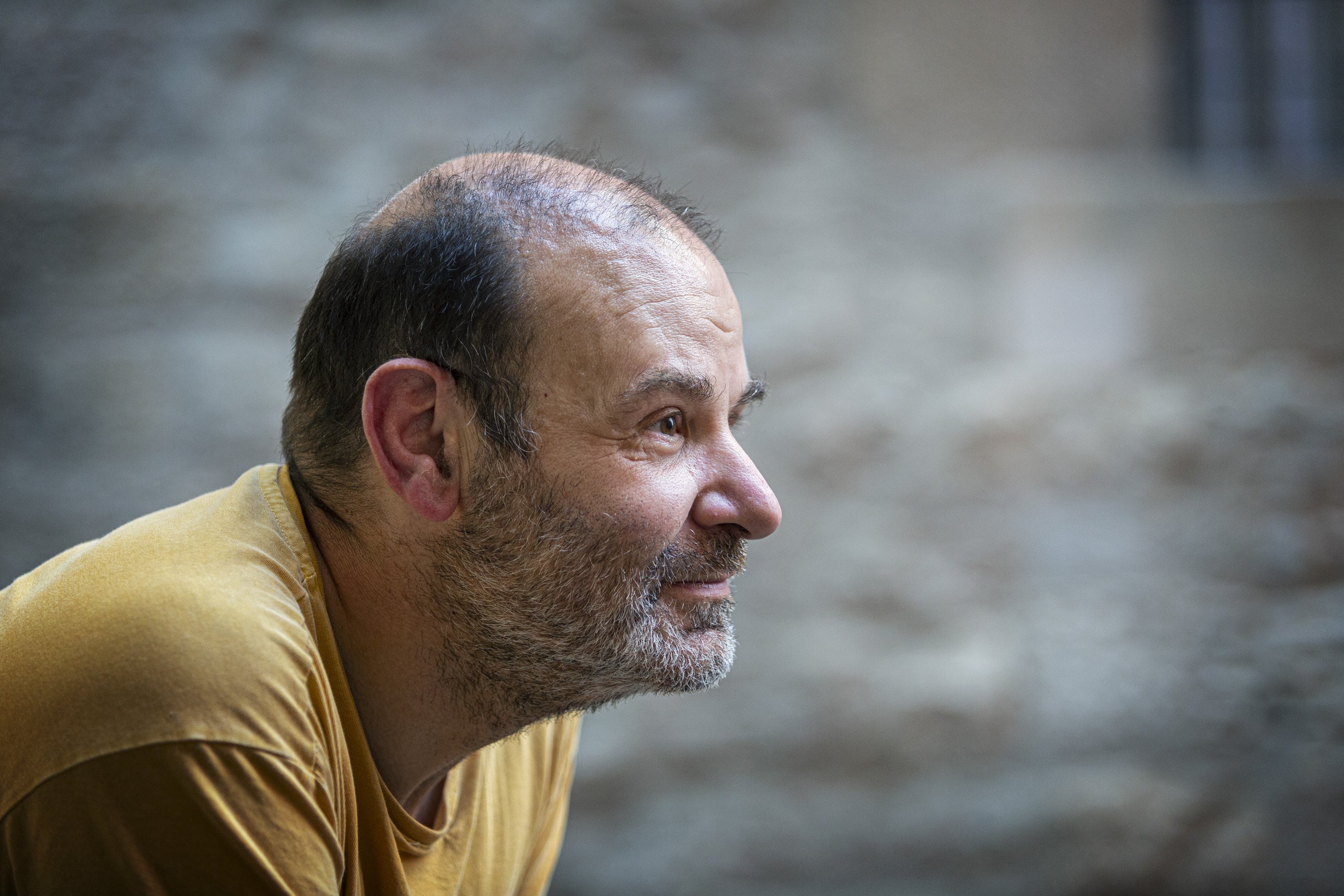 A "normal language": what do you mean?
The goal is for it to be possible for Catalan to develop in all areas and this also means in the audiovisual sphere. We're not asking for 400 channels in Catalan, what we want is to have a few and have enough offer for everyone. At the end of 2019, we published a study on Netflix that indicated that 335 fiction and documentary feature films on the platform have a Catalan-language version. However, this was only incorporated onto the platform in 4 cases. And most of these versions, whether dubbed or subtitled, are paid for with public money. If public money is used, it is to be made the most of and that means the film should reach the public in all its versions. Even more so when the law on cinema states that dubbing or subtitling must be attached to the film wherever it goes.

Does the Catalan government need to be more demanding?
We need a government that says "we have this law and it must be obeyed." The Constitutional Court cut out parts of the Catalan cinema law and reduced the figure of 50% of film premieres in Catalan, initially demanded by the Generalitat, to 25%. But right now we are below 3%. Since it was approved in 2010, we have had Catalan governments that have been unable to enforce regulations approved by the Parliament of Catalonia. Another law that was approved the same year and that has never been complied with is the Consumer Code, which makes labelling in Catalan mandatory for products sold in Catalonia. It was passed by Parliament, it has been okayed by the Constitutional Court but, nevertheless, no business ministry in the Catalan government has ever enforced it.

In 2019, you published a sociolinguistic study on the languages used in school yards and playgrounds in urban areas of Catalonia, which left some worrying data.
Young people and children are very important, because they are the future. And the situation is concerning at both secondary and primary education levels. The study shows that even in areas where Catalan is the majority language, a maximum of 45% of conversations between students take place in Catalan. If we raise a generation of people who in their childhood and adolescence do not speak Catalan in their leisure time, it will be difficult for this to change when they reach adulthood.

We are told that Catalan is not a useful language.
Unemployment among Spanish speakers who do not use Catalan is twice as high as among those who do know how to speak it. The unemployment rates are 21.7% and 11.7%, respectively. And the data shows that [within the group of Catalan users] there are no distinctions between people who speak Catalan as their mother tongue and those who have learned it later. This demonstrates the social utility that language still has: the most important thing is your ability, not your origin.

We need a government that says "we have this law and it must be obeyed."

Should we promote linguistic militancy?
If you decide to speak exclusively in Catalan, it will take you two or three weeks to get used to it. At first you may feel uncomfortable, but it is a feeling that will subside. A lot of people suffer because they think that others won't understand, but that's a lie. In fact, statistics indicate that 94.4% of people living in Catalonia understand Catalan. Another step people can take is to buy products labeled in Catalan or prioritize web pages that have it as an option. And to demand respect for our rights and to denounce them when they are violated. 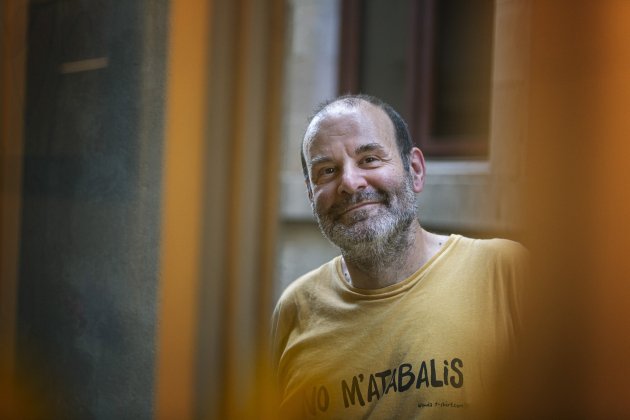 Catalan language Catalan, in a state of linguistic emergency: "Even independence won't save it" Alba Domingo