Catalonia is going through an exceptional moment its history which could culminate in the proclamation of the Catalan Republic. A historical milestone that has four precedents. In the history of Catalonia, the Republic has been proclaimed on four occasions: Pau Claris, in 1641; Francesc Macià, in 1931, and Lluís Companys, in 1934, proclaimed it as president of the Catalan government and Baldomer Lostau, in 1873, in the name of the Provincial Deputation of Barcelona. With substantial differences. Lostau and Companys called for the 1714 Catalan règim foral (chartered regime) to be adapted to a republican modernity. Claris and Macià, meanwhile, proclaimed independence. A separate State that in the first case gravitated (for the Spanish military threat) towards the political orbit of France; and which in the second would be redirected (for similar reasons) towards a Spanish republic that, true to Spain's atavism, was rebelling against the existence of a Catalan Catalonia.

The causes of the Revolution of 1640 are surprisingly similar to the current situation. Saving the obligatory differences, naturally, it was an outburst of popular indignation against the policies of the Spanish chancellery of Madrid and against the collaborative Catalan classes who executed them. Corruption, motto of the courtly estate-owning oligarchs had become the only aim of doing politics. Lerma, Olivares (prime ministers) and the whole string of secretaries who, like flies, swirled around them, caused a crisis in Catalonia that was without precedent. The most dramatic practice of corruption manifested itself in the food speculation perpetrated from the office of the Spanish viceroy's office. Widespread bankruptcy, large-scale evictions and Spanish military occupation perpetrated on the pretext of solving the graciousness of the Catalan institutions towards banditry complete the picture. 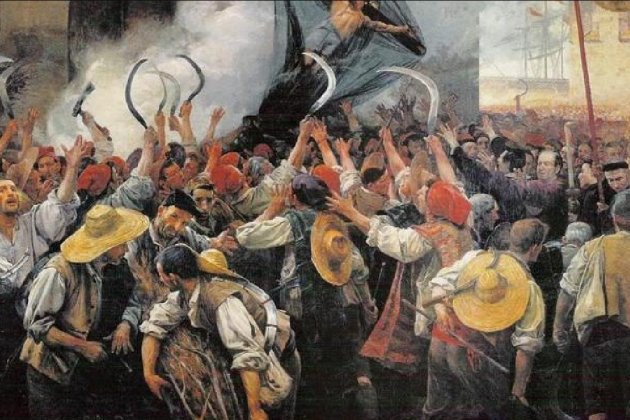 The intellectual and business elites of Barcelona assumed the responsibility of leading the popular dissatisfaction and redirecting an anti-state and anti-Castilian movement towards an independence revolution. The figure of Pau Claris emerged. And the Spanish viceroy (the count of Santa Coloma) a virtuoso of anti-politics, well-renowned for corruption and the most hated figure in the country, "did as he pleased" with justice, and answered with a repressive offensive, an explosion of testosterone, which would take the movement's leaders to prison. The revolution broke out when the Castilian soldiers, on orders from the viceroy, shot at the crowd gathered in front of the dungeons to demand the release of their leaders. Santa Coloma, abandoned by testosterone, died cast onto the rocks of Montjuïc hill, and Claris, shortly thereafter, proclaimed the first Catalan Republic, which lasted the time it took the enemies of independence to poison him.

Very few things from Claris' Catalonia remained in Lostau's. A world had passed: two lost independence wars, four deadly civil wars, an Industrial Revolution that had transformed the face of the country and two centuries of devastating Spanish domination. By the Spain of a Castilian fabric. With all the water (and that which isn't water) that, since Claris, had passed under the bridge, the country's governing class (at least, its most notable members) proposed a different architecture of Spain. The Spanish liberals, fans of political DIY, had changed the paintings and upholstery of the Spanish Bourbon dynasty's estate. But the rafters and the walls conserved the pure atavistic aesthetic of Goya's works. Liberal Spain was nothing more than a gypsy replica of revolutionary, Jacobine France. The hidden devotion (or inconfessable complex) which, historically, the Spanish had felt towards the French. 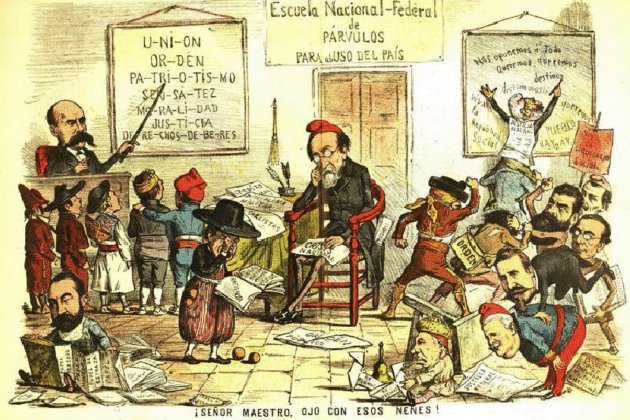 Contemporary caricature of the federalist Revolution (1873)

The Catalan bourgeoisie (the part not involved in the slave trade) and the popular classes (the embryonic proletariat), embraced federalist republicanism to change Spain. To make it Catalan. Socially and economically. Lostau's project wasn't pro-independence. It was radically regenerationist and in its political naivete it aspired to resolve the territorial conflict and class warfare with a kick up the backside. Of Catalonia and of Spain. It naturally underestimated the deep routs of ancestral power, which, at the ends of the 19th century, had mutated into the curious phenomenon of caciquismo (a nepotistic, local, boss rule system), to open the doors of the estate to the children of their foremen. Lostau, in a manoeuvre of doubtful effectiveness, proclaimed the Catalan federate republic, which, in a time when Spain already lead the world rankings in military coups d'état, lasted the time it took caciquismo to criminalise it.

1931: the Republic of Francesc Macià

The Catalonia of the zarzuela (a kind of Spanish operetta) and Lostau didn't have many elements in common either with that of the charleston and Macià. The independence of Cuba, of Puerto Rico and of the Philippines had caused, among Spanish intellectuals, a curious jingoistic reaction, introverted and mystical, which would turn into the ideology of Spanish nationalism and into the badge of the dynastical parties, the equivalent of the current constitutional parties. For reasons so obvious they don't even need mentioning, Catalan society turned its back and maybe even mooned. This regenerationist project, the "Catalanisation" of Spain, didn't even get as far running into the brick wall. For the first time since 1713, a pro-independence political current emerged which the dictatorial regime of the pure "Capitoline Triad" (King Alfonso XIII, dictatorial prime minister Primo de Rivera and civil governor of Barcelona Milans del Bosch) with the scrapping of the then Commonwealth of Catalonia and the persecution of Catalan culture fed exponentially. 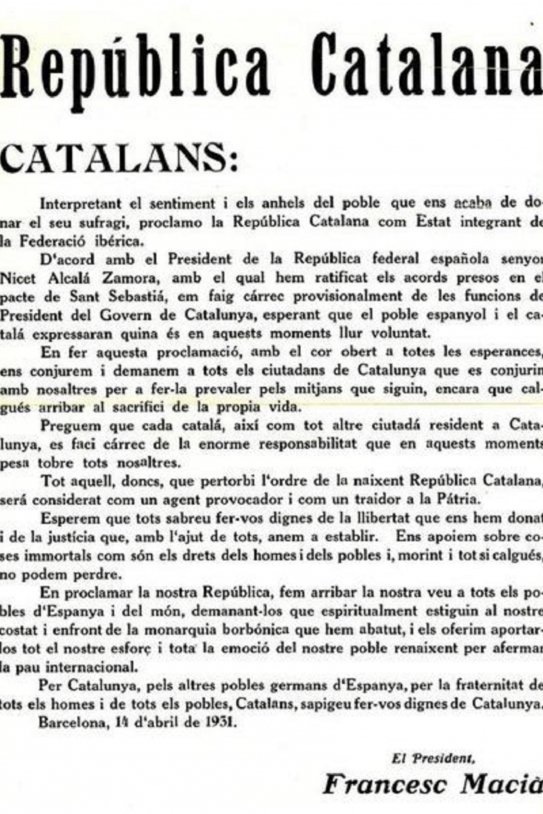 Macià led the fight against the dictatorship and would attain the category of myth. He won the 1931 local elections (the first after the dictatorship) with a fully pro-independence political program. He won them so clearly that Spain's political class forced the king into exile to avoid Catalan self-determination. On 14th April, Macià proclaimed the Republic hours before someone dared to do the same in Madrid. The Catalan Republic was born independent, but committed to the other republics of the peninsula. The political and social hostility it generated in Spain, comparing Catalan self-governance with the autonomy that preceded the independence of Cuba; definitively gives away that, in the Spanish imagination, Catalonia was a colony submitted to the empire by the "just right of conquest" of the Bourbon dynasty. And it reveals that the Republic considered itself the legitimate heir of the Spanish imperial territory. It's apples to apples the current constitutional regime.

1934: the Republic of Lluís Companys

Alfonso Guerra did not invent the idea of "knocking off the Catalan Statute" in 2006. That was invented by the very republican Niceto Alcalá-Zamora, prime minister from 1931 to 1936. Companys inherited a knocked-off Statute that hadn't satisfied the jingoistic Spanish maelstrom. And he found himself immersed in a process of statutory liquidation (the only one in the Spanish state) which would cause, on purpose, a brutal tension between Catalonia and Spain. Nor did former prime minister José María Aznar invent all that about "having to correct the autonomist drift of the Left". Gil-Robles, the leader of the anti-republicans who, paradoxically, had become the party of government, applied it in the middle of a republican regime. These things happen in Spain. Companys saw himself forced to bring back Macià's Republic, approved by more than three quarters of the public; as a statement of collective dignity. His error was to reply with arms to provocation, which Spain's political and military classes would make him pay for with the suspension of autonomy and the imprisonment of the Catalan government. 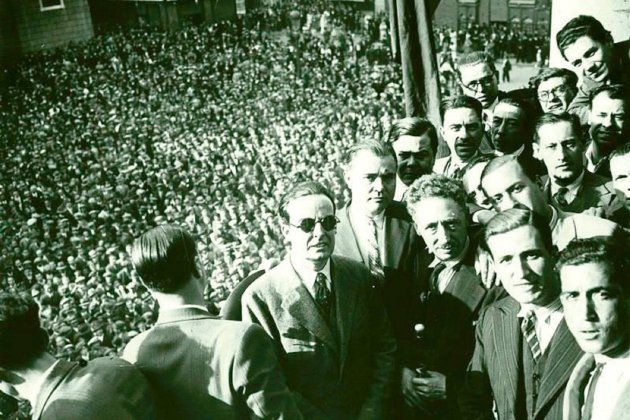 Proclamation of the Catalan Republic (1934)

The current independence process has a history that dates back to 2006, when the Constitutional Court "knocked off" the Statute endorsed by the Catalan public. Since then, we've played witness to a shady spectacle that reveals the true nature of Spain's pseudo-democracy; feral and dominated by the mystical-religious jingoistic testosterone, which aspires to the idealised Nativity play of a cherub school. Dynamic friezes and traditional figures. With the inevitable leading roles for prime minister Mariano Rajoy (Joseph), deputy PM Soraya Sáenz de Santamaría (Virgin Mary) and Treasury minister Cristóbal Montoro (Baby Jesus). Peace and love. It's for the immediate future to find out who the role of the ox is reserved for to complete the scene. The scene of the atavistic and eternal Spain. And it's also for the immediate future to reveal the role that, in this Nativity play, the supposedly progressive and democratic Spanish left will play. The Three Kings? The shepherds? Or the ass?