The skyward rise of Barcelona's Sagrada Família, slowed by the pandemic

Until this year, the skyward rise of Barcelona's Sagrada Família had a clear finishing date: 2026, coinciding with the centenary of the death of architect Antoni Gaudí. Construction work since 2019 has been focused on the tallest towers of all in the spectacular basilica: the four towers dedicated to the Evangelists - Matthew, Mark, Luke and John - and grouped with them, the Virgin Mary tower, and the crowning, central tower of Jesus Christ. But as with so many things, the Covid-19 crisis has affected the plans for Gaudí's "temple of atonement". It is not directly because the construction schedule has fallen behind, but rather, that the pandemic has reduced the building’s budget, based on visitor donations and fees. Hence, the plans to complete construction in just six more years are in doubt. 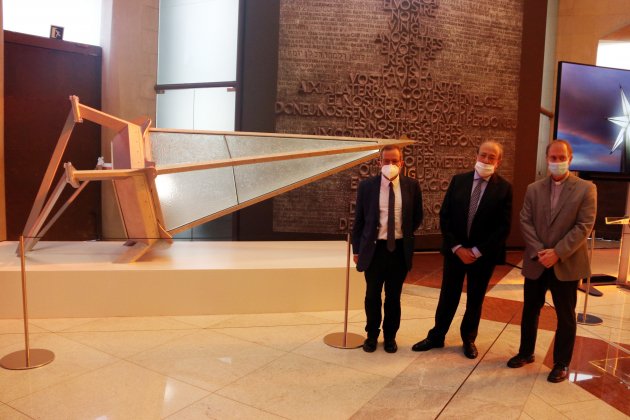 The managing director of the Sagrada Família construction board, Esteve Camps; the general manager, Xavier Martínez, and the chief architect, Jordi Faulí, posing beside one of the twelve points of the star that will crown the tower of the Virgin Mary / ACN

"The effects of the pandemic are forcing us to rethink the calendar and this affects the goal we had set for 2026," said Esteve Camps, Sagrada Família construction board director. Speaking at the media event to launch three Open Days - which are, nevertheless, fully subscribed - Camps explained that the reduction in visitors due to the fall in tourism (with the Basilica still closed from Monday to Friday) makes it "impossible" to achieve the goal or offer an alternative calendar, pending the evolution of the pandemic. The 100 million euro budget which the builders worked with in 2019 will fall to just 17 million next year. However, work will resume in two weeks and, as a minimum, the plan to complete the tower of the Virgin Mary in 2021 is still going ahead.

Video shows the building schedule which was planned until Covid-19 struck, with the work on the four towers of the Evangelists (Matthew, Mark, Luke and John) rising along with the crowning central tower of Christ which they surround, and beside this group, the tower of the Virgin Mary (Mare de Deu, in the video); the four-tower façade of Glory is also yet to be built - on the building's seaward side, fronting Carrer Mallorca.

Second tallest tower, to be complete in 2021

Architect Jordi Faulí, director of the construction team, confirms that the tower of the Virgin Mary will still be topped off by the end of 2021. In fact, the 112-metre body of the tower is already ready, as well as its interior - an open space 60 metres high that receives daylight through 800 windows and illuminates the apse, just beyond the altar.

With all the levels of panels in place, construction will continue with the 25-metre pinnacle, topped with an illuminated twelve-pointed star. This whole piece will take the tower to 138 metres tall. pic.twitter.com/xvh16CRwz9

What remains to be completed is the 25-metre section that will crown the tower, which is itself divided into 3 parts. The first is a crown with twelve points, each point with a star on it - a Marian symbol mentioned in Revelations. It will be angled to face the centre of the cross on the central tower of Jesus Christ, thus creating a dialogue between the Virgin Mother and her son. From within the crown, a 12-metre hyperboloidal shaft will emerge clad in blue trencadís, culminating in a large luminous glass star which will also have twelve points and a total diameter of 7.5 metres. This star will reflect daylight and project its own inner light at night. 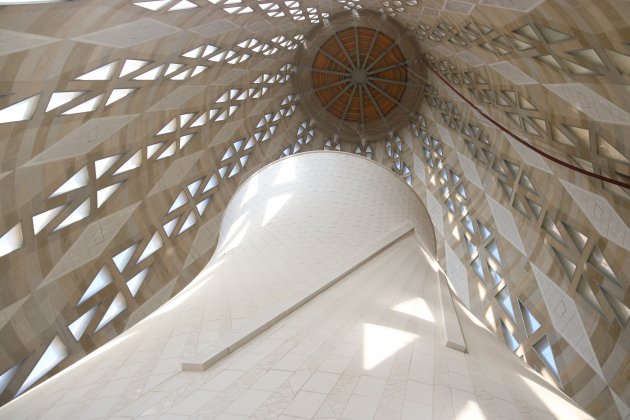 View from below of the interior of the tower of the Virgin Mary, in the Sagrada Família, still under construction / ACN

These are the goals that the Sagrada Família construction board has set for the next year and a half. However, Esteve Camps does not rule out that if the situation improves, we may soon see the topping off of one of the four towers of the Evangelists.

Weekend visits to the Sagrada Família can be booked online, while for Barcelona residents, another offer of free entry passes for November visits will be available on the website from October 5th.