Barcelona's Sagrada Família has given an update on the progress of building works. And they did so 85 metres in the air (93 yards), at the base of Jesus Christ tower, the great central tower planned to preside over the basilica. The point is almost exactly half the final height the building will reach, 172.5m (189 yards). But that doesn't mean that works are only halfway there; in fact, the majority of the cathedral is already finished, all that's left are the towers and one façade. The Construction Board expects building works to be completely finished in 2026, the centenary of architect Antoni Gaudí's death, although the decoration process will take a lot longer still. 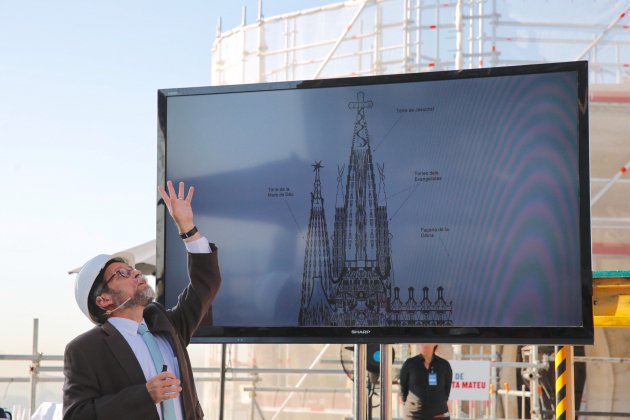 Esteve Camps, head of the Construction Board, celebrated the start of the "home stretch" of the construction process, which started in 1882. He emphasised that they do not receive any subsidies but said that, thanks to revenues from tourism, they expect to finish work in 2026, if the annual budget remains around its current level of 50 million euros a year (£44 million, $59 million),. Camps says there was a slight decrease in ticket sales in 2017, which they attribute to the terrorist attack in August, but that visitor numbers are now recovering and tickets frequently sell out, hitting the limit of 15,000 people a day. 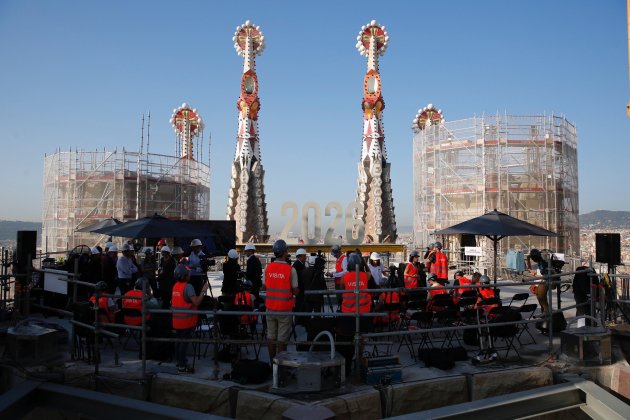 The steps needed to finish

The main problem they face to finish the project is that Antoni Gaudí had planned the main façade to be the Glory façade on Mallorca street, with a grand staircase up to the basilica. But the space this was to occupy is currently taken up by other building. As such, to complete the Sagrada Família as Gaudí envisioned, residents and business owners of an entire block will have to be evicted.

The city council has, so far, appeared very reluctant to give the necessary permission. Camps, rather cryptically, however, said that representatives of the Construction Board meet with city hall officials every fortnight to study the plans needed for legal permission for the works. Camps insisted that the project can be completed, including the Glory stairs, arguing that "we're the heirs to Gaudí's project and we want to implement [it]". With respect to the problems that could cause residents, he was evasive and said that it's a decision for the city council. Also regarding the city council, there's a pending conversation over paying for their works licenses. Camps limited himself to stating that "we'll pay what we have to under the law". 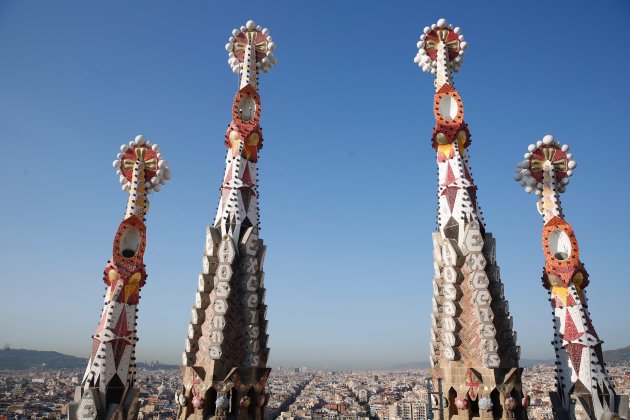 Jordi Faulí, coordinator of the building team, explained the progress of works over the last year, during which the main task has been raising the towers. On the one hand, great advances have been made constructing the tower of the Virgin. This tower, which is empty, acts as a receptacle for light, directing it to the skylight over the altar. The towers of the evangelists, which flank the tower of Jesus Christ, have been growing and are now almost 100 metres tall. Soon they'll reach their 135m final height. But the most important step is that they've got the base of the Jesus Christ tower ready. This will have a large block in its centre, with a staircase and a glass lift to reach the upper part: the base of the cross which will dominate the basilica. And the city.

Also finished now, definitively, is the Passion façade. Work will start soon on the Glory façade, which, unlike the staircase on that side can be completed without problems and doesn't need to get involved in urban planning. Camps says that the designs are so complex that they will take years to complete and that a group of artists, under the supervision of a theological commission, will have to be entrusted with interpreting the documents left by Gaudí. Currently there's a commission of five art critics studying the matter. The idea of entrusting it to a group of artists is to ensure that no individual's work stands out. Faulí said that the Sagrada Família is, above all, a collective work. At the same time, they're already planning the restoration of the Birth façade, analysing the problems and defining the project. 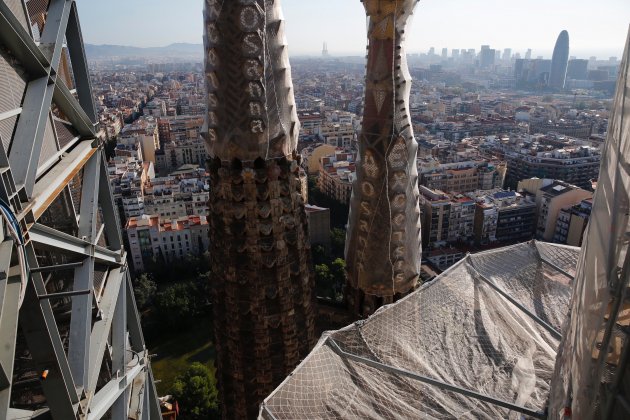 Filling the basilica with activities

Currently, the Sagrada Família is seeing great success as a tourist attraction, but its activities as a religious centre are much more limited. Esteve Camps said that the church has, over the last year, started to consolidate its regular religious activities. Every Sunday, at 9am, an international mass is held in five languages, open to all. There are also four concerts held annually, two of which coincide with Christmas and Easter. Similarly, they've put together a program of visits for schools, with three different focuses (religious, historic and artistic) so that schools can choose which they prefer. And for St George's Day (St George being the patron saint of Catalonia) all Georges and Georginas can visit for free (as can anyone called Jordi or Jordina or Jorge or other translations). And for Barcelona Mercè city festival this weekend, 30,000 members of the public have been able to enjoy open doors access. All this said, however, the vast majority of visitors are still from abroad and they aren't there for religious reasons.