When it comes to explaining traditions, one always has to try and be polite and patient; sometimes it can be extremely difficult to get your head round some of the customs observed in another country. We Catalans have been on the receiving end of this many times when we try and explain some of the most symbolic elements of our festive season to foreigners. You just have to have a look at the surprise on late night host Seth Meyer's face when US actor and comedian Kate McKinnon told him about a Catalan Christmas tradition her family had adopted:

There are explanations for why the two most distinctive figures of the Catalan Christmas have strong scatological links. Indeed, we'll start with those two, as they are the characters which attract the most interest.

Catalonia's Christmas log or tió de Nadal - not officially called the cagatió, despite Kate McKinnon's hilarious description above - is a tradition whose form varies slightly from place to place. It is, after all, based on a piece of wood, and when all is said and done, mother nature will shape it the way she wants. There is, though, an archetypal tió which you will see frequently in Catalonia. These days the log is hollowed out inside. 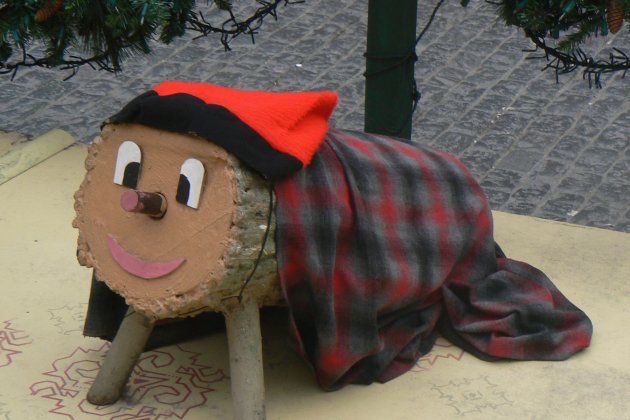 The tradition says that from 8th December on, the log can be installed in family homes, and must be very carefully looked after: it has to be covered up with a blanket so that it doesn't get cold and, especially important, it has to be fed every night. Meal preparation does not present a problem as the log has simple dietary tastes: fruit, vegetables, eggs, mandarin peel, and so on. The only rule is: nothing cooked.

So after being well fed up, the big day eventually arrives: Christmas Eve. If we have treated this hunk of wood so well, it is because it is going to give us something in exchange, and exactly what this is will be revealed before Christmas Eve dinner. The children of the household gather around the smiling tree trunk and with a suitable stick or implement, take turns to beat the log, while enthusiastically singing a traditional song to encourage the log to give them presents. Yes, by shitting them out from its rear end. As we said, scatological.

Here are the lyrics used to encourage the log's digestive processes:

Shit, log! Shit nougat, made from hazelnuts and pine nuts,

Don't shit sardines, which are too salty,

Shit nougat, for the kids who've been good!

Originally, the tió was a burning log on the wintertime open fire, but where does the idea of beating it come from? It wasn't to release tension - rather, it was a question of poking the fire so that pieces would fall off to build the bed of embers and help keep the home fire burning.

The caganer or shitter

The caganer is another of Catalonia's most popular Christmas figures, whose presence is indispensable in a Catalan nativity scene. It consists of a shepherd in crouching position, with trousers lowered to reveal his buttocks, in the act of relieving himself in the outdoors, normally placed in a discreet position in the holy stable scene: hidden among bushes, or behind the stable itself. 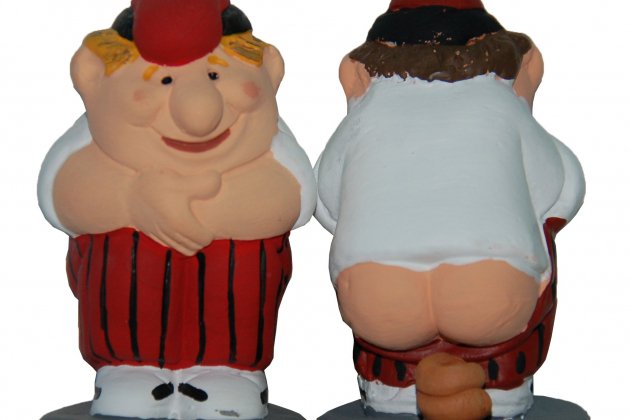 People say that if the caganer is left out of the nativity scene, misfortune will come to the home since his feces fertilize the earth and bring happiness and good fortune for the year ahead. Although the original shitting figure is a shepherd in traditional clothing with a faixa or girdle and a barretina or traditional hat, in recent years, the appearance of caganers depicting politicians, performers, sportspeople and other celebrities has become common. 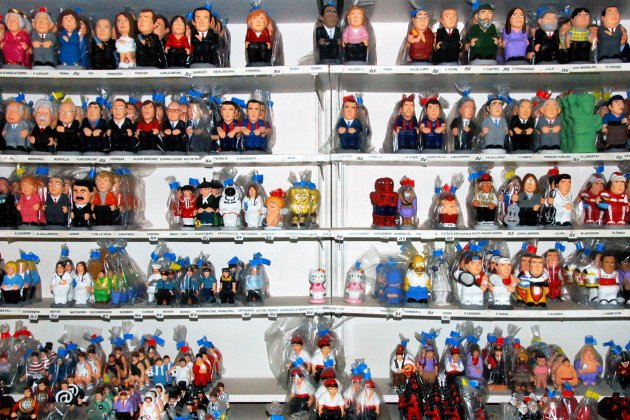 However, if there is one Christmas tradition that is the same all over the world, it is probably sitting down at a table with friends and family and food - food in abundance. Let us talk now about the most traditional dishes and treats for Catalan festive season meals, like the torró - nougat. All year round, each of the different celebrations held in Catalonia has its special traditional dishes or foods, and there is a children's song that explains this to perfection:

That is: "For All Saints, chestnuts; for Christmas, nougat; for Easter; a traditional cake (served with chocolate "sculptures"); and all year round - chocolates"

The torrons - nougat  - are made from almonds, sugar, honey and eggs and are served as a "just in case" dessert around six in the afternoon - the time when massive festive lunches usually finish -  if people are still a little hungry and want to help the digestion of the earlier feast with something not too rich! 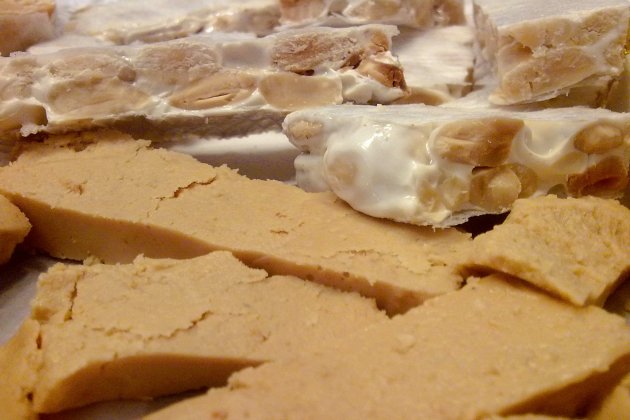 There are of several types of torró: cream, chocolate or those named after where they come from: Xixona and Alacant. This last one is the most dangerous of all because it's very hard and every Christmas it is responsible for giving dentists some extra work.

The other traditional dish is the escudella - a soup that may seem simple but if made in abundance will also provide the solution for a second holiday meal. Escudella is a broth made from chickpeas, potato, cabbage, onion, celery and carrot; it is strained and then large pasta shells are added. Then to strengthen it, a pilota or meatball, made from a mixture of meats, is added. This is the dish that is traditionally consumed on Christmas Day, and what is left will help us to make the lunch for December 26th, known in Catalonia as Saint Stephen's Day. 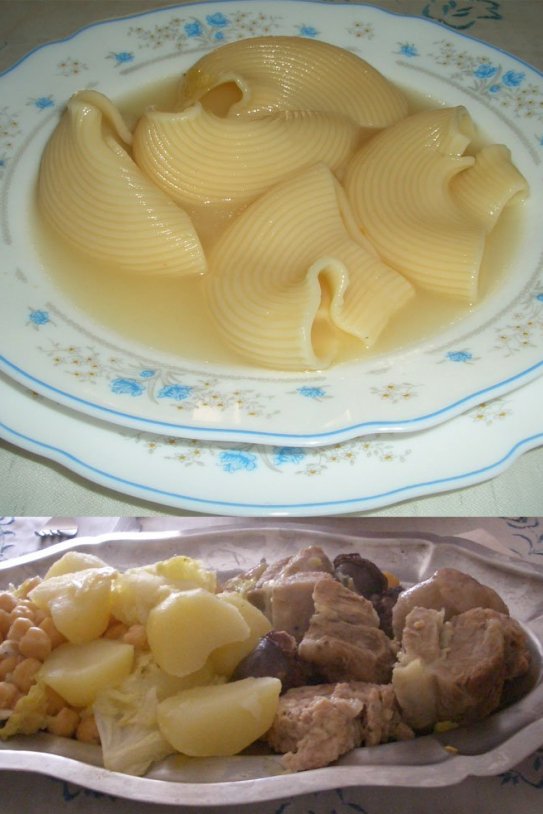 It's said that at Christmas, Catalans scarcely have time to get up from the table after one meal before they are having to sit down again for the next. What many households do is to meet on the 25th with one part of the family and then on the 26th with the other part - in the latter case, to eat canelons - which you may know as cannelloni. This is an Italian recipe, but many years ago, with the leftover meats from the day before's soup, people started making filling for this Italian pasta dish. 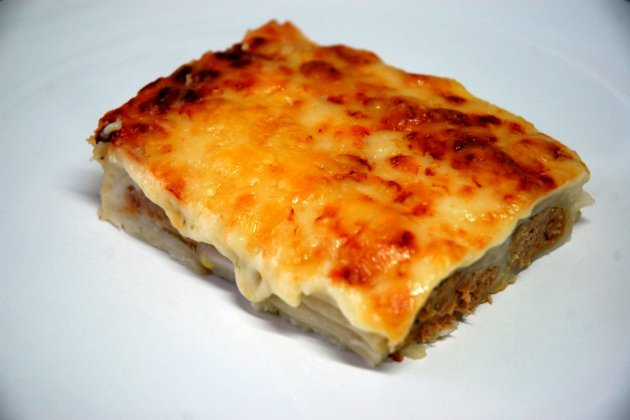 It should be said that if this tradition is maintained today, it is not due to a desire to save time, since cannelloni require effort to make and families that feast on them usually prepare them days in advance. However, any excuse is a good one for sharing a good meal, and if we have to say that we are doing it to use up the leftovers... then so be it!

We return to the theme of sweets. This is the last Christmas classic and luckily it is not served until 6th January, the day of the Three Kings, and thus time is able to pass and we can digest and recover from the earlier celebrations. The tortell is a ring-shaped tart made from a sweet bread that may be filled with cream, custard or marzipan. The tortell de Reis - the Kings' day tart - enjoyed on 6th January is similar, but with a surprise inside. Actually, two surprises: a bean and a small figurine (normally one of the three kings). The rules of the game are as follows: the cake is cut in as many pieces as there are guests, each of whom, without looking too closely, takes a piece and bites into it. Whoever bites onto the bean is obliged to pay for the cake, while the person who finds the figure in their piece of cake will be crowned as king. Just as with the nougat, it is certain than a good number of Catalan teeth have been lost in the process. 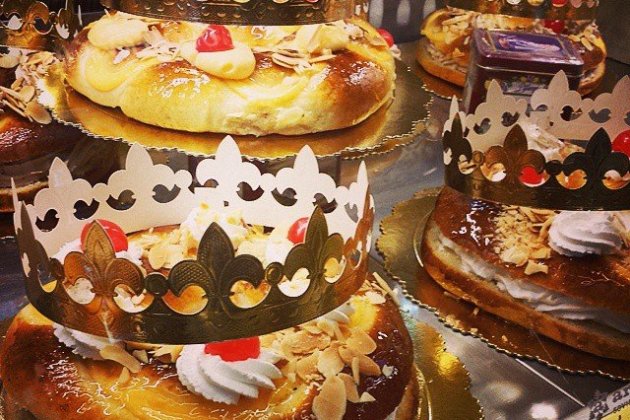 And if your Catalan Christmas holidays leave you a little spare time between lunches, dinners, logs and shitters, and you have an urge to go to the theatre, Catalans traditionally enjoy their Christmas-time nativity plays or pastorets. The traditional play tells the story of two shepherds, Rovelló and Lluquet, who are told by an angel that Jesus has been born; they decide they must journey to visit him, but the battling forces of good and evil do not make their travels easy.

Many versions of the Catalan nativity play have been produced but the best known one is that by Josep Maria Folch i Torres dating from 1916.

This modest guide will hopefully answer some of the questions of those new to Catalonia whose eyes open up as big as oranges when they hear about the tió and the caganer. But then none of that is really anything out of the ordinary round here. Maybe another day on these pages we will explain the story of Patufet, a tiny boy who ends up being expelled from a bull's arse.