The United States recognises Jerusalem as capital of Israel 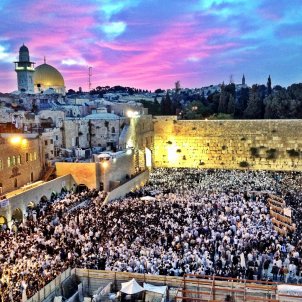 United States president Donald Trump has today recognised Jerusalem as the capital of Israel, and will transfer the North American embassy there within three or four years. This recognition is the most important step ever taken by a leader of a major international power in support of the Israeli position, since the recognition of the country's independence, in one of the world's most politically delicate regions.

Israel declared that Jerusalem was the capital of the country in 1980, in line with biblical and Jewish historical tradition. And at the same time, the Palestinians took the step of claiming East Jerusalem as their own capital, in an attempt to maintain their own position, arguing that it is also a holy city for Muslims.

Jerusalem has been a disputed city for over 3,000 years, but the only group who have had continuity in their presence there have been the Jews. When the UN General Assembly in 1947 approved the resolution for the partition of British-administered Palestine into a Jewish state and an Arab state, Jerusalem was to be treated as an entity on its own, to be administered for 10 years by the UN, leading up to a referendum in the city to allow its people to decide where they wanted to belong.

But the Arabs declared war on the state of Israel just as it came into being, and the Jerusalem plan did not prosper. As a result of the war, the city remained divided into an Israeli part and an Arab part, the latter controlled by Jordan. It was the first time that Jerusalem had been split, and it remained that way until the Six Day War in 1967, when the Arabs lost and consequently the entire city passed into Israeli hands. The freedom of the holy places of the three major religions was respected, albeit with constant episodes of tension.

Israel, however, did not define Jerusalem as its capital until 13 years afterwards. In 1995, the United States legally approved the transfer of the embassy, now in Tel Aviv, to Jerusalem, but no North American president has implemented this.

The consequences of Donald Trump's decision, representing a sudden change of position by the North American administration, are difficult to predict, and hostile reaction can be expected from the Palestinian government, Hamas and the Arab countries, as well as Turkey. The Israeli government has mobilized army and police reserves in the main cities and at points of tension.