The president of Catalonia, Pere Aragonès, and the minister for climate action, Teresa Jordà, have this Wednesday presented the roadmap for Catalonia's energy transition over the coming decades. Broadly speaking, the Catalan government's plan envisages that in less than 10 years, 50% of Catalonia's electricity production will come from renewable sources, that nuclear power plants will be definitively shut down in 2040 and that by 2050, in less than 30 years, Catalonia will be a completely decarbonised country.

The transition is to be formalized in a new Law for Catalonia's Energy Transition, to be passed before the end of next year, as the president and minister announced. It will include the requirement for renewable energy projects to have dialogue with the territory, especially if they are based on generation of more than 5 MW of power. In addition, the new law will require developers to have reached agreement with owners of over 50% of the land affected in order to go ahead with projects, as well as communication with local councils, and the need to offer citizens the ability to participate in up to 20% of the investment, or ownership, of the project - all with the aim of creating a distributed model, which has territorial and democratic cohesion and with citizen participation. 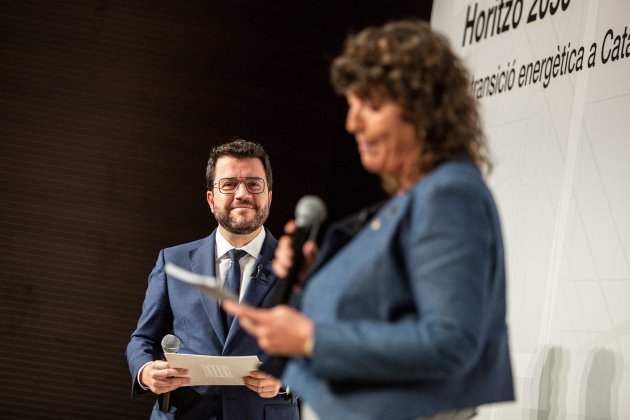 Before beginning his presentation, president Aragonès recalled that the climate emergency is the biggest challenge facing humanity today and that Catalonia must play its part, and therefore, it must take this path to transform its energy model, which will mean an authentic "energy disruption" for the whole country of Catalonia. The president recalled that 72% of greenhouse gases come from the use and transformation of energy

As well, climate action minister Jordà added that Catalonia currently generates about 12 GW of power and that only 3.5 GW of this comes from renewable sources. However, with this new government plan, it is intended that by 2030 the country will be able to generate a total of 14 GW of electricity from renewable sources. To achieve this, she said that the first step is to amend the decree on renewables in order to achieve territorial pacification as a way to optimise strategic planning, recalling that, in this transition, Catalan territory will be of paramount importance. 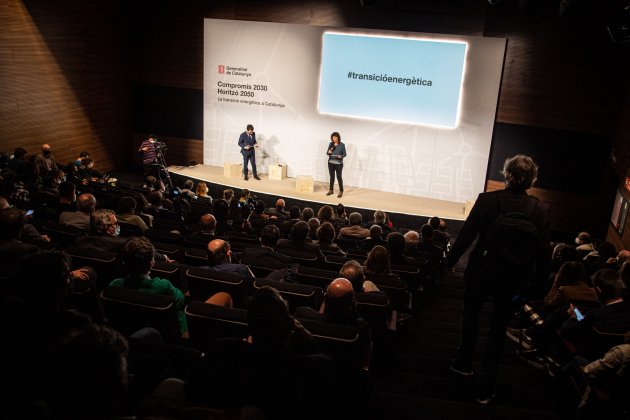 As the minister said during the event, the starting point of this acceleration towards the energy transition in Catalonia will be the amendment of the decree on renewable energy that regulates the deployment of wind and photovoltaic installations. The aim of this modification is to introduce prioritization criteria to encourage self-consumption and prioritize the approval of projects that connect at medium voltage or generate less than 5 MW, to be consistent with the distributed and democratic energy transition model.

At the same time, the proposed amendment seeks to lay the foundations for the territorial cohesion of the energy model. The modification will leave behind the current model in which projects have been presented without the knowledge of the owners of the land or town councils, and introduces the obligation to achieve agreement from owners of 50% of the occupied area. The decree also introduces the obligation to offer participation of at least 20% of the project to the population and the public administrations.

Finally, while the previous decree law was applicable only to land which was not zoned as urbanizable, the new decree increases site availability by including land that could be urbanized, both that which is already developed and that still undeveloped. 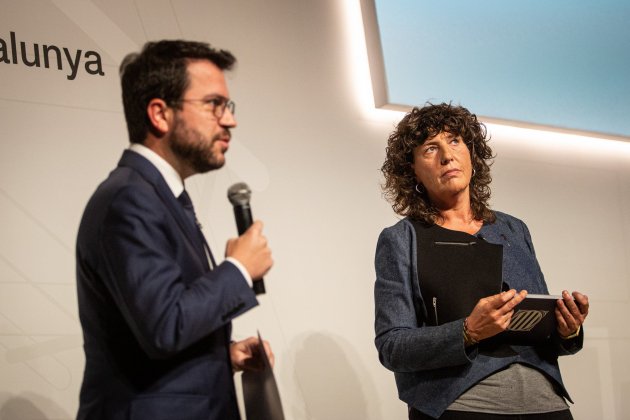 With all this on the table, the Catalan government's new roadmap for the energy transition of Catalonia can be set out in detail. It will begin with the amendment of the decree on renewable energies and will include the creation of a new energy transition management network, the Network of County Offices for Energy Transition (OCTE), consisting of a network of technicians that the government will place in each county to support municipalities in renewable projects and to ensure and coordinate active participation of the territory in the territorial plan for the renewable energies sector, which is to be completed in the next six months.

Secondly, the Catalan government will approve a new territorial plan for renewable energies in Catalonia, which will develop a plan of the energy infrastructures that the country needs, and this is timetabled to be approved by the government during the second half of 2023. And with this completed, the new Law of Energy Transition will be passed, a law required to be coherent with what is already set down in the climate change law; from there, it will articulate the new energy model for Catalonia.

Creation of a public energy company

Another major announcement of this evening's event was the creation of a public energy company to play an influential role in the Catalan energy sector, taking part in the entire value chain of the electricity sector in order to define and plan the energy transition model. A public energy company that may be an energy producer, especially in those areas where there is no interest from large energy developers, as well as taking part in the ownership of new renewable generation plants, assisting and participating in the development of renewable and citizen-controlled energy communities and taking part in the public management of hydroelectric power plants when current concessions expire.