Pep Guardiola's yellow ribbon and how the UK press saw it

The yellow ribbon worn by Manchester City manager Pep Guardiola is a come-what-may defence strategy. That may sound like football, but of course his aim, in wearing a small yellow lace on his lapel, is the defence of Catalan prisoners' rights. And the come-what-may aspect is that he intends to carry on even despite the threats to punish him from England's Football Assoication. In Sunday's final of the Carabao Cup, won by Manchester City, the Catalan manager reaffirmed his determination to carry on wearing the bow until the end.

More than half of the press conference following Guardiola's first title in English football was devoted to the already controversial yellow ribbon. A defiance of the rules, a stand against injustice, a symbol of the call for liberty for those unjustly deprived of it: it has shaken up a whole country.

Since Guardiola decided to stand up to the FA over this issue, the tense political situation between Catalonia and Spain has been given a new avenue of internationalization. But although all leading British media have reported the latest episode with the yellow ribbon, not all of them are clear about the story behind the story.

"Guardiola was facing further punishment on Sunday for refusing for a third time to bow to the FA’s demand to remove a ribbon which symbolises support for those imprisoned during the ongoing push in the region [Catalonia] for a referendum on independence from Spain." It is clear to The Telegraph, which puts the symbolism in context and explains what the City manager is trying to convey.

"The City manager, charged with breaching FA rules banning political symbols during games, delivered a passionate defence of a public show of solidarity that began in December and has seen his private plane searched twice by police looking for ousted independence leader Carles Puigdemont." And as well as this they update the situation in Catalonia even further, quoting Guardiola's press conference statements word for word. 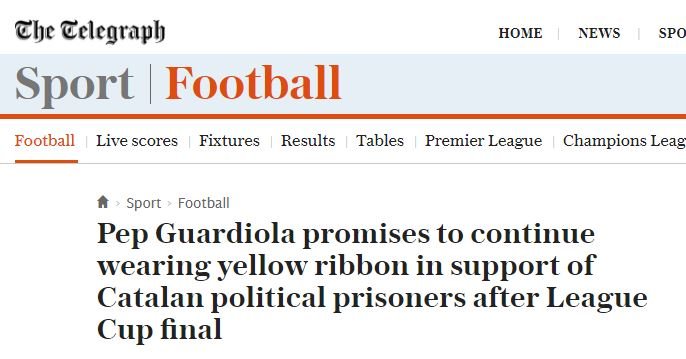 The Times newspaper (link with paywall) speaks about the great risk that Guardiola has taken in once again wearing his yellow ribbon at a match in spite of the warnings he has been given. Beyond the fine that he is bound to receive, the paper raises the issue of a possible suspension which could end up harming the interests of his team.

"Pep Guardiola defied the threat of a ban and wore his symbolic yellow ribbon during the Carabao Cup final", explains the The Times. The newspaper also suggests that the City coach may have tried to hide the bow with his coat and scarf. But "there were still glimpses on show", it concludes. 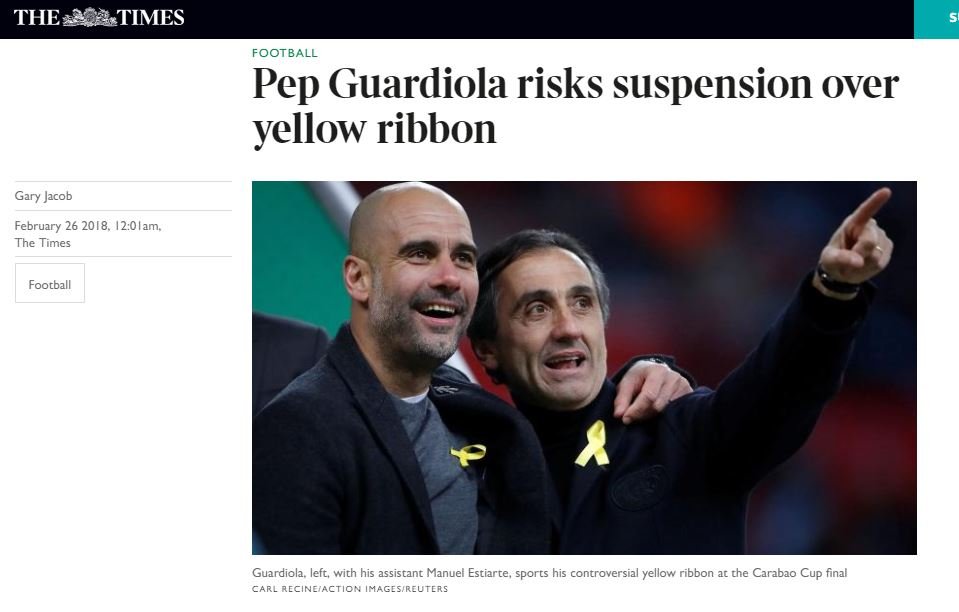 "Pep Guardiola could face a further FA sanction over yellow ribbon defiance", says the headline in The Guardian. The paper also explains that the Football Association has been discussing the the use or non-use of the ribbon with the City club since December. However, the prestigious newspaper surely misquotes Guardiola in saying that "the ribbon is in support of two Catalan separatist leaders who have been imprisoned". As the coach knows well, there are four Catalan pro-independence leaders behind bars in Madrid jails, although two of them - pro-independence civil society leaders Jordi Cuixart and Jordi Sànchez - were imprisoned before the others, vice president Oriol Junqueras and interior minister Joaquim Forn. So it may be an old quote. 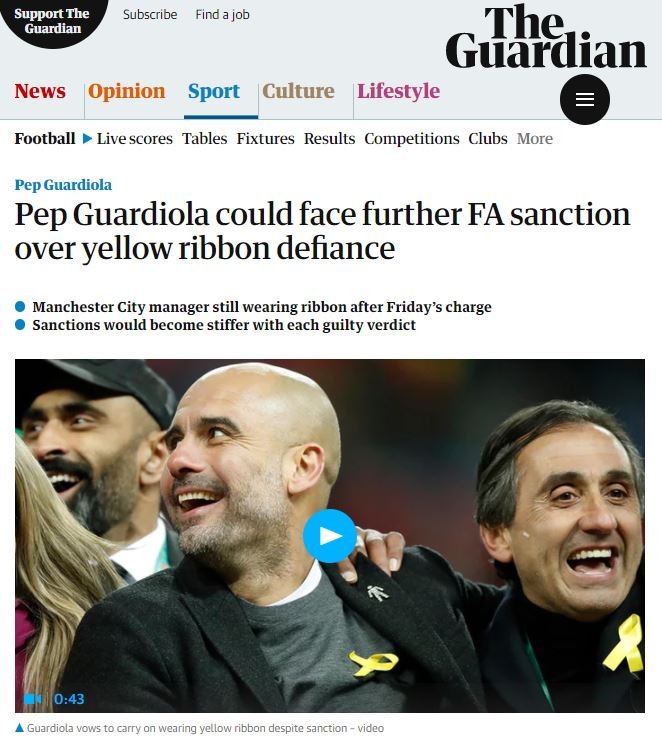 The Sun talks about the risk of a fine for the Catalan coach, but also quotes him as saying that "being human is more important". The paper refers to the four political prisoners in Catalonia and the fact that he has worn the ribbon for much of the season - the four Catalans were imprisoned in October and November. The Sun also reported how some City supporters echoed their team manager's gesture, also wearing the ribbon at the weekend and injecting some yellow into the Wembley stands.

The Mirror goes with the angle on Pep's "challenge" of the English FA but also repeats an explanation previously given on the meaning of the yellow ribbon: since he speaks about "two specific people who are in prison", it may be based on the same older quote as The Guardian. But the second half of the quote is sadly accurate: "And they are still there. So, until they are not out, always here [points to ribbon] will be shared with me. Because, OK, they can suspend me for doing that, but the other people are in jail."

After this, though, things start to slip. The Daily Mail explains that "Guardiola ignores FA ban threat", all good so far, but then continues explaining that the ribbon is to show support for the independence of Catalonia. Not quite. 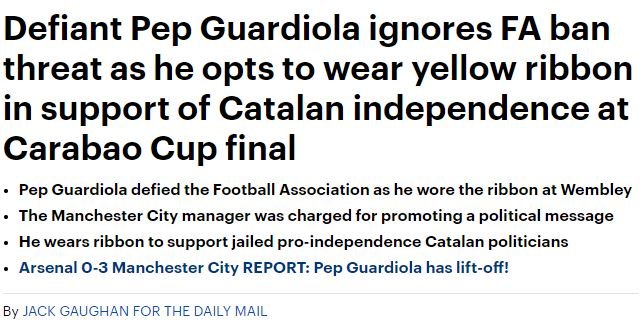 But there is another news source which finds it even harder to link the yellow ribbon with the political prisoners. iNews writes that Guardiola is wearing the symbol "in support of the independence of Catalonia". In the end, however, it ends up transcribing his literal answers from the press conference: "There is four guys in prison. There are other guys who are outside ...Catalonia [and] if they come back they’ll be in jail." Unfortunately, that part is correct. 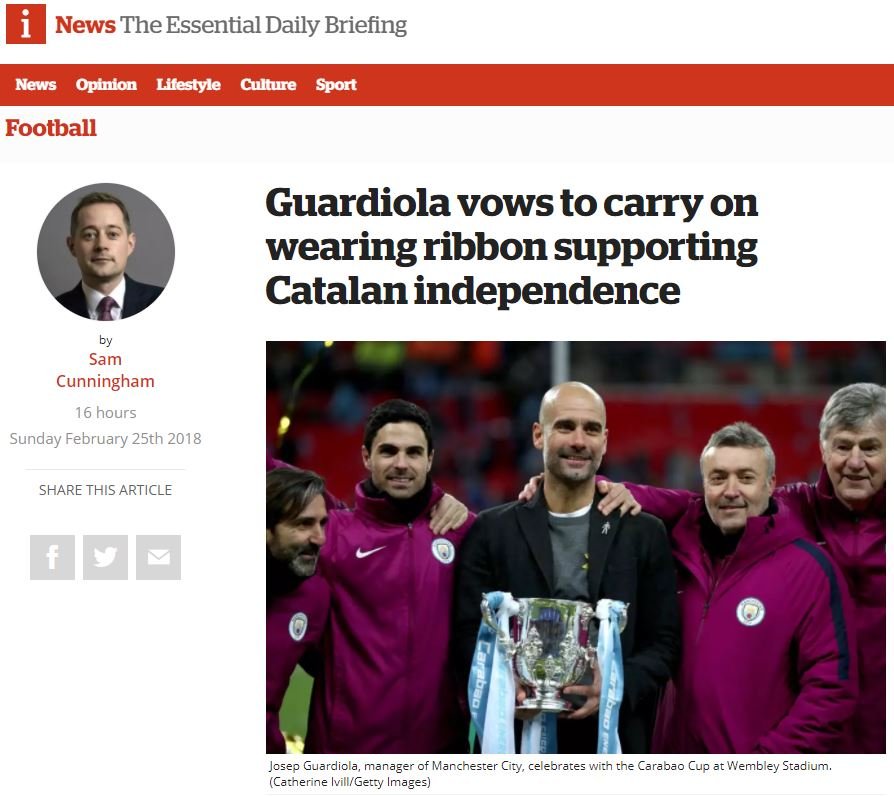 Some are reliable, some get it slightly or seriously wrong, but awareness of the Catalonia issue is growing. Earlier, Pep Guardiola helped give an international profile to the Catalan independence process, and now he is shining a spotlight on the cause of the political prisoners. The English press and its readers have a better understanding of the reasons why a manager from a small town in Catalonia is taking on the might of the English Football Association with his yellow ribbon.