The former president of Futbol Club Barcelona, Josep Maria Bartomeu, has been arrested. Catalan police entered the offices of the Barcelona club this Monday to carry out a series of searches in connection with the so-called Barçagate affair. And they also took four former management figures into custody: Bartomeu, former president; Jaume Masferrer, Bartomeu's right hand man; Òscar Grau, the ex-CEO, and Román Gómez Ponti, who was head of legal services. These arrests by the Mossos d'Esquadra police are in order to take statements from the former club directors. The Barçagate scandal, which broke just over a year ago, involved the club's alleged contracting of social media companies to create accounts defaming some of FC Barcelona's own players, opponents of the Josep Maria Bartomeu board and even politicians. Now, just days before club members vote for a new president, police have raided the Camp Nou stadium. Bartomeu and Masferrer will spend Monday night in the cells.

Arrests have been made

The Mossos police, who demanded documentation from the football club's financial, legal and compliance departments, closed off the Camp Nou stadium, leaving some Barça employees unable to enter the offices and having to wait outside. The police have been investigating the Barçagate affair for months, in an investigation declared confidential by a judge for an initial period and then extended six times as the inquiries into the giant football club continued.

In addition to the office searches at the Camp Nou, police also entered the homes of Josep Maria Bartomeu and Jaume Masferrer to look for evidence. The court order also noted that searches were made at the offices of several companies: I3Ventures, Nicestream, and Telampartner SLP, a company specializing in financial investments.

In this operation conducted by the economic crimes area of the Mossos' criminal investigation division, the alleged offences being looked into include fraudulent administration and corruption between individuals, according to radio station Cadena SER.

The audit that was carried out in relation to the Barçagate affair confirmed that the contracts for the services of the company I3Ventures were divided into smaller amounts so that they remained under the threshold level for which approval by the board of directors would have been necessary. This scandal led to the resignation of six directors: Emili Rousaud, Enrique Tombas, Silvio Elías, Josep Pont, Maria Teixidor and Jordi Calsamiglia.

Bartomeu, for his part, stated in July 2020 that he had not paid any extra costs to I3Ventures and that the company had not yet completed the services for which it had been contracted. 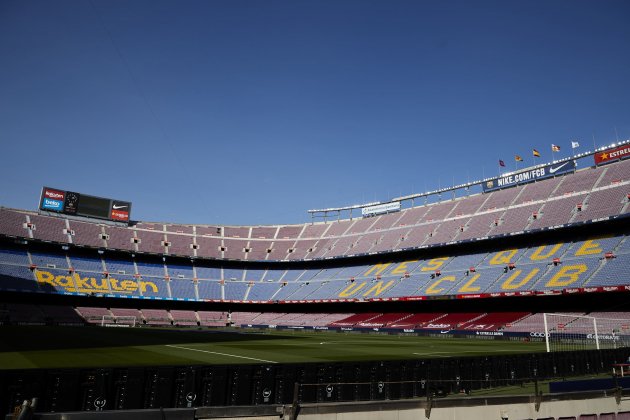 Barçagate marked the emergence into the public domain of an institutional crisis in the organization that culminated in the resignation of president Bartomeu and his board of directors in October. The disaster was both economic and sporting - the 2019-2020 season ended with a humiliating 2-8 slaughter by Bayern Munich.

There is less than a week to go before the Barça presidential election is held and the new president will be either Joan Laporta, or Víctor Font or Toni Freixa.

Main image: The Mossos at the Camp Nou in an archive image / EFE

barça in crisis Messi: "I'm staying at Barça. I'd never go to court against my lifetime club" Albert Viladegut