The president of Catalonia, Quim Torra, has used the format of an institutional statement to announce from his government's Generalitat palace in Barcelona that "this legislature no longer has any political course to run". Torra, of the Together for Catalonia (JxCat) party, accused his coalition partners in the Catalan Republican Left (ERC) of disloyalty and of failing to fulfill their obligations in the defence of the presidency. But the president's final response to the crisis that has grown in recent days was to declare that, after the executive has passed its budget, an early Catalan parliamentary election will be called.

The president's appearance this Wednesday morning had been announced the night before without ERC being informed of its content, leading to overnight speculation about an immediate calling of elections or a deepening of the government's division.

Torra spoke of "the deterioration of mutual trust that is most needed at decisive moments" and warned that "the government cannot function without loyalty between its partners".

The president was critical of how Parliament's procedural committee, the Bureau, had on Monday accepted his disqualification as an MP, as ordered by Spain's Central Electorial Commission, despite a majority of the Catalan chamber having agreed not to accept this decision, but rather to uphold the sovereignty of Parliament, in sessions on January 4th and 10th. "This pro-independence consensus was not respected on Monday," he said, as well as accusing the speaker Roger Torrent (ERC) of "abandoning the presidency of Catalonia to the elements".

He complained that this was not the first time such a situation had occurred and concluded that the government "could not function without unity, without a common and shared strategy on fundamental issues and without loyalty among its partners".

The president said that he considered it necessary to return to "the course of unity, of joint strategies and of once again engaging in shared struggles that today has been crushed by decisions that were not agreed on or even advised". However, he stated that neither he nor JxCat would break the unity of the pro-independence space. 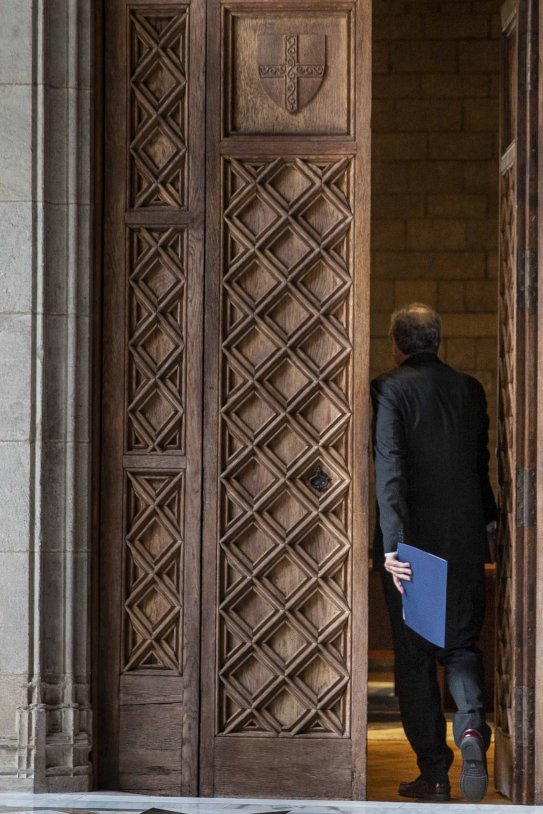 Despite the differences between the pro-independence government partners, he asserted that "at this moment when the legislature has already come to the end of its journey, it is time to show maximum responsibility", and thus to put "the country and its needs to above any partisan or personal interests."

On this point, he emphasized the need to pass the Catalan government budget, for which an parliamentary agreement already exists and which was due to be approved by the Catalan cabinet later on Wednesday.

He also noted the need to explore "the real will of the Spanish government to undertake a serious negotiation", addressing the political conflict with Spain, and to find out whether the Pedro Sánchez executive has "a genuine will to end the repression” in Catalonia. For this purpose, said Torra, he would meet with the Spanish prime minister next week.

The draft budget was to be voted on today at the Catalan government's cabinet meeting - in fact, it should have been already approved on Wednesday morning, but the last minute schedule change caused by Torra's institutional statement saw the meeting moved to 3pm. Once passed, it will take Parliament about two months to debate and pass the proposed public accounts. Thus, by late March or early April the Catalan government budget could be successfully approved, although should the bill be referred to the Board of Statutory Guarantees, it could be held up for another month.