Spain's veneration for Franco, denounced by Puigdemont in Geneva

Exiled Catalan president Carles Puigdemont used his appearance on Sunday evening at the International Film Festival and Forum on Human Rights in Geneva to launch another criticism of the attitudes of the Spanish state. After the projection of a documentary on the independence referendum of 1st October, Puigdemont took part in a debate in which he criticized Spain's continuing veneration of the figure of the dictator Francisco Franco.

In explaining Spanish attitudes to Franco, Puigdemont mentioned that the Valle de los Caídos, the huge civil war monument in which the dictator is entombed, is still publicly funded and that the web page of the Spanish government refers to Franco as "a head of state". "Franco is buried, but in the Valle de los Caídos", he said, also recalling that the republicans who fought against Franco during the Spanish Civil War "do not have any monument".

"We can't deny the progress that has made, but to say that it is a brilliant democracy without problems is not true. Let's be honest", said Puigdemont in response to El País journalist Xavier Vidal Folch, who had also been invited to the debate, to defend the unionist thesis. Vidal Folch had assured that "Spain has gone from dictatorship to democracy in a brilliant way" and that the dictatorship "had been incinerated".

The words from Puigdemont and Vidal Folch on the dictatorship, spoken in the birthplace of Jean-Jacques Rousseau, aroused the audience attending the debate. Many jeered at Vidal Folch's assertion that the Spanish democracy is "brilliant" and also applauded Puigdemont when he spoke about how the Valle de los Caídos is funded.

The president spoke in an auditorium with an audience of about 900, divided between two rooms, and in the presence of family members of the Catalan prisoners, such as Txell Bonet, who is Jordi Cuixart's wife as well as their young son, along with Laura Masvidal, wife of Quim Forn. The former CUP deputy Anna Gabriel, exiled here in Switzerland, was also present.

Regarding the formation of a new Catalan government, Puigdemont did not want to enter into the issue of possible agreements between the pro-independence parties, in spite of being asked about this. He recalled that Germany had needed five months to form a government and Spain had had to repeat elections in 2016.

As well, he added that having a new government does not imply that this time Spain will want to open dialogue. 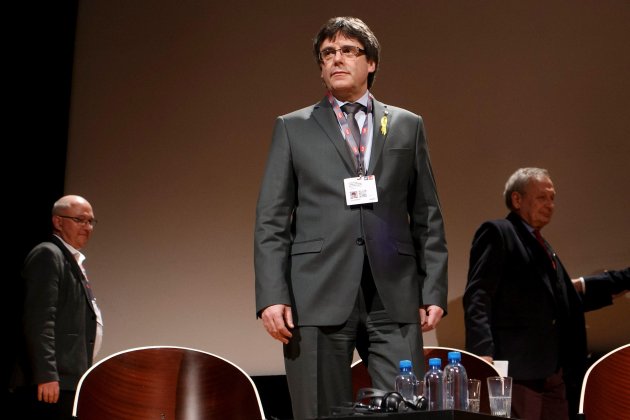 Why was the Spanish flag not lowered after the declaration of the republic?

During the debate, Puigdemont made a reference to one of the unknowns in the events of last October. Specifically, he defended the decision to not take down the Spanish flag from the Catalan government's Palau de la Generalitat, after the declaration of independence on 27th October.

Puigdemont asserted that the Spanish flag is "an important symbol for an important part of Catalonia" and defended that "everybody has to be able to have their own identity, even in an independent Catalonia".

Below, the video of the entire debate, in the original French: