How Scottish independence support has grown till it's touching 50%

The history of Scottish independence has its origins a thousand years ago, when the kings of England wanted to turn the nobles of Scotland into their vassals, which provoked innumerable conflicts and disputes. Since then, the idea that Scotland should be a fully sovereign state has gone through many stages: from its practical extinction to the situation it is in right now, on the verge of 50% support.

And although the only independence referendum held was relatively recent - in 2014 - many things have changed since then, which may have provided the impetus to push independence over the 50% threshold necessary to turn Scotland into an independent state. In 2014, supporters of 'Yes' won 44.7% of the vote, while those favouring 'No' won the plebiscite with 55.3% of the vote. 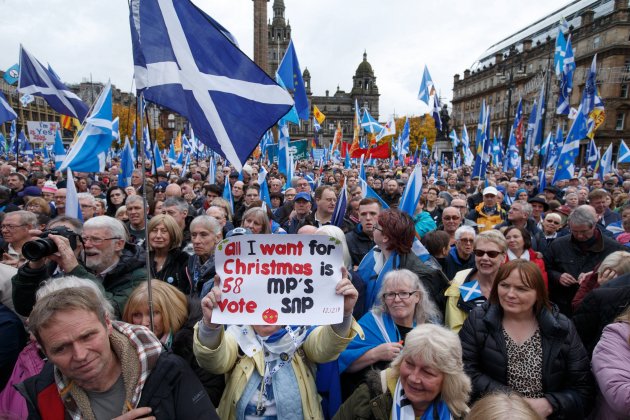 Image from the start of the 2014 referendum campaign / Photo: Efe

At the time, it seemed to some that the defeat of the pro-independence movement meant that a "once in generation opportunity" had been lost, these being the terms spoken of as Edinburgh and London sealed the pact to hold the referendum. But two years later came another referendum, that of Brexit, which again highlighted the differences between Scotland and England. If the Scots clearly chose to stay in the European Union (62%), their neighbours down south voted to leave, a decision that was finally put into practice in February last year.

The difficult exit of the UK from the Club of 27 once again aroused the desire of Scottish independence to hold a new referendum, aware that the majority of the nation had voted against leaving the EU. In fact, the reaction in the polls was immediate, and in a matter of months support for independence went from 41% to 48%. Already as Brexit approached, first minister Nicola Sturgeon was calling for a second IndyRef despite pushback on the idea from Downing Street: "You can't keep us against our wills".

The other major factor that has boosted support for independence has been the Covid-19 pandemic. If only 22% of Scots approve of the health crisis management of British prime minister Boris Johnson, 61% value positively that of their first minister Sturgeon, who has usually been more agile than the Conservative leader in applying and adapting restrictions. This is also reflected in the polls, where it can be seen that while 'Yes' to independence has climbed to over 50%, 'No' has fallen right back to 39%.

If Sturgeon repeats or expands her majority in the Holyrood Parliament and forces Johnson to give the go ahead to a second referendum, all indications are that the margin will be much narrower than in 2014. The effectiveness of the UK vaccination process, and the economic question marks over the viability of independence help the unionist argument, but the Scottish government's own good management and all the problems associated with Brexit have helped bring many Scots to look more favourably on independence.

In Thursday's election to the Scottish Parliament, then, the pro-independence parties are seeking a mandate for the second independence referendum they want to hold during the next legislature.  If the polls are correct, the Scottish National Party (SNP) will be further consolidated in the power it has ruled for 14 years. The party now led by Nicola Sturgeon became the leading force in Hollyrood Parliament in 2007. In fact, the only times that party has not dominated at the polls were at the first two Scottish elections (1999 and 2003), won by the Labour Party, which, from Downing Street had worked for the devolution of powers which restored the Parliament of Scotland.

In recent years, the Scottish Green Party, which also supports independence, has joined the SNP, strengthening the pro-independence majority and increasing the plurality of the movement. In this Thursday's election there will also be a new party on the ballot: Alba, the party led by former first minister Alex Salmond, although most polls predict he will not get representation.