Puigdemont: "The Spanish state decided to damage Catalans as much as it could"

For the first time since the Spanish government applied Article 155 to Catalonia in 2017, the Parliament in Barcelona has given the word to the president in exile, Carles Puigdemont. It has done so precisely as part of the Article 155 commission, investigating the suspension of Catalonia's self government under that Spanish constitutional article, at which six of the Catalan political prisoners appeared last week. Puigdemont stated that the application of 155 was a coup d'etat aimed at revenge and at punishing not only the independence movement and the authorities responsible for the referendum, but also, "liquidating the institutions" and "doing as much damage as it would be possible to a population that it considered guilty of voting badly."

"They decided to harm the country, the 7.5 million Catalans, as a punishment. They turned their backs on an entire people, including those who legitimately defended remaining within Spain," he said, in a strongly-worded speech. 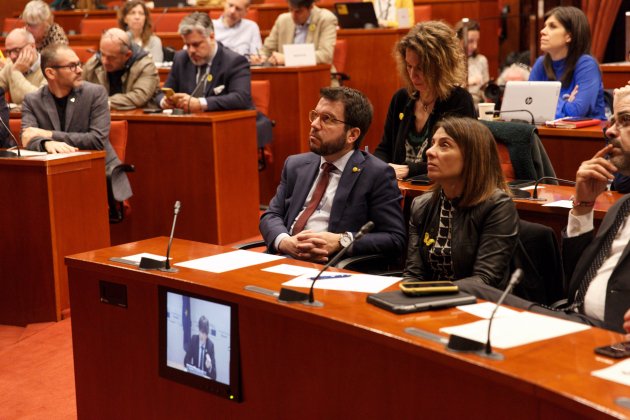 Puigdemont spoke by videoconference from the European Parliament. In Barcelona, sitting in the front row of the commission hearing, were members of the current Catalan government, led by vice president Pere Aragonès, who left with most of his colleagues after the initial part of the testimony to attend the scheduled cabinet meeting. The only one who remained was culture minister Mariàngela Vilallonga, who also wanted to hear the subsequent intervention of exiled former holder of the portfolio, Lluís Puig.

The president said that his obligation in October 2017 had been to maintain the commitments his government had made and at the same time to "stop the coup" - "it was necessary to prevent the state from doing something insane", he said - and for that reason he proposed to call an election if the Spanish government agreed to withdraw the threat of 155, withdraw the police forces it had brought to Catalonia and end both the imprisonment of Jordi Sànchez and Jordi Cuixart and the takeover of the Catalan government's finances.

He recalled that he had argued for this decision within his government and the JxSí parliamentary group, with the intention of "protecting the citizens and institutions from that hunger for vengeance". "If the state had given us assurances, I would have called elections in spite of the misunderstandings and tactics of some who, at the critical time, preferred to play games irresponsibly in order to take advantage of it. It would have saved a lot of pain and suffering."

However he asserted that the state was determined to prioritize "violence and repression" and nothing the government could do would have deterred Madrid from unleashing that "repressive wave". "In October 2017, Spain was once again dark and sinister, it had once again become the state that we had mistakenly believed buried under the gravestone of four decades of supposedly-exemplary democracy," he reflected.

Puigdemont warned that this time, those responsible for the coup were not the military, but powers such as justice, and thus "Spain was entering a dark place which it has not emerged from, and which it will have difficulty in emerging from, and if it does, it's going to be at an enormous cost." He expressed the "profound indignation" caused to him by the imprisonment of vice president Oriol Junqueras and other members of his government, and he declared that the Spanish executive has carried out "a judicial Brexit" - that is, it had moved Spain, de facto, outside of the European judicial framework.

Throughout his address he insisted that his intention had been "to safeguard the institutions and protect the people from the aggressive intentions" of a state with a "monstrous voracity, which was running wild and had the ability to do a great deal of damage" and which he says "took a kind of pleasure in punitive action, something unbecoming for a democratic state, an insane urge to repress, to deliver a lesson, an exemplary punishment."

The president accused the state of going far beyond what the Spanish Constitution allows in its suspension of Catalan autonomy, and recalled that when the 1978 Constituion was drafted, article 155 was explicitly rejected as a way of dissolving an autonomous region's parliament. "There was widespread consensus, almost unanimously, that this article did not grant unlimited power," he added, insisting that it was not possible to use this argument to alter people's rights and freedoms.

His conclusion is that 155 was applied unconstitutionally, "flagrantly" skipping the required mechanism of a prior demand to the autonomous government that it return to compliance, a step which should have served as the beginning of a dialogue to overcome the conflict.

Puigdemont also used his speech to refer to the way of overcoming 155 and the acceptance of responsibilities by those who "committed" it. "The fact that more than two years later there has been no apology, and what's worse, that there are people who want to reapply it, indicates that the culture of 155 is deeply rooted," he said, warning that one cannot simply turn a page without those responsible accepting what they have done.

The president, who referred to those who wanted to "charge against innocent and peaceful people", as "criminals", warned that no matter how the names change, the culture that inspires this behaviour is "immutable."

Unionist parties the PSC and PP did not attend the commission. Neither did the third party which voted for 155 against Catalonia, Ciudadanos. Although the party had said it would not take part in the commission, Cs leaders did appear last Tuesday to question Oriol Junqueras. However, they left before hearing his answers.

Puigdemont recalled that the PSC was a "key element" in the application of 155 and that Pedro Sánchez, in opposition at that time, supported the suspension of Catalonia's autonomy. However, answering questions from the CatComú deputy, Marc Parès, the president in exile admitted that now Spain is governed by a new type of government and it was therefore worthwhile to look at it differently to that of the Rajoy executive.

Despite this, he questioned whether the state was ready to give up violence as a means of preventing independence, and warned that without international mediation it would be difficult to reach a solution.

Before ending, in response to the political parties' comments, he mentioned some of those who were responsible for applying 155 to Catalonia, attributing to "poetic justice that those who ordered that decapitation are no longer present today". "We are here, and they, the Riveras, Rajoys, Sorayas and Millos, are no longer around, not due to a judge's decision, [a recourse] we don't need to use, but rather because the people didn't vote for them," he said.