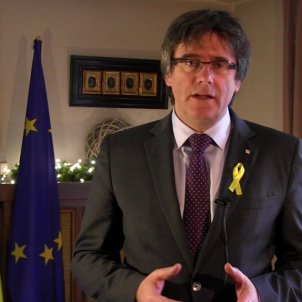 Acting Catalan president Carles Puigdemont has used his end of year speech from Brussels to make it clear to Spain's prime minister Mariano Rajoy that he has no intention to renounce his claims and to demand that Spain must behave "like the European democracy that it assures us it is" and, therefore, that it needs to recognize the result of the Catalan elections on December 21st and negotiate politically with the Catalan government.

The acting head of the Catalan executive, from his exile in the Belgian capital, was keen to continue the traditional annual speech delivered before New Year in spite of the exceptional nature of the current situation. In fact, the speech had to be disseminated via social media.

Puigemont's discourse took place the day after Rajoy announced that, under the powers of direct rule over Catalonia granted to him under article 155 of the constitution, he had decided to set the date for the constitution of the new Catalan Parliament for 17th January 2018. That is, a week before the final date possible under parliamentary regulations, thus giving the president less time to tackle the issues of the investiture, which has to be attempted ten days after the initial constitution of Parliament. Moreover, Rajoy had clarified that he sees it impossible for Puigdemont to be president and advised him not to test the will of the Spanish state again.

The head of the Catalan executive used his speech this Saturday night to respond to the Spanish PM's comments with a clear and convincing message: "As president, I demand that the Spanish Government and those that support it rectify those things that no longer work, that they repair the damage caused, and that they reinstate all that they have dismantled without the permission of the Catalans". "The ballot boxes have spoken, democracy has spoken, everybody has been able to express themselves. What is prime minister Rajoy waiting for before accepting the results?", he asked.

Puigdemont asserted that, "now that the recipe of violence, repression and the liquidation of Catalan self-government has failed" Catalan and Spanish citizens, as well as many European citizens, governments and institutions, expect that "the era of dialogue and negotiation will finally begin".

The president's discourse began by referring to the exceptional circumstances which his government now finds itself in and regretting that "only a year ago, no-one in Catalonia or Europe would have even thought that we would witness the shameful and scandalous situation of having political prisoners today in jails in an EU country". "And we have four of them", he added, recalling the current situation in prison of Catalan vice president Oriol Junqueras, minister Joaquim Forn, and the respective heads of the ANC and Òmnium organisations, Jordi Sànchez and Jordi Cuixart.

Puigdemont thanked Catalans for their record participation in the elections of 21st December and for having issued a message “with such clarity” that it cannot be disputed. “We are a democratically mature people who have earned the right to become a republic of free men and women”, he declared.

For this reason, he admonished Rajoy's executive for the fact that the plans that they had designed to repress Catalan demands had not worked out as they had wanted and he recalled that not only did the election result not yield the “docile and conformist government” that Rajoy had dreamed of, but moreover, Spain's governing Popular Party had been relegated to last position. “What did all this repression achieve?", he asked.

The acting Catalan president asserted that Catalonia will not acquiesce to this kind of response, that it has the right to possess the instruments that the Spanish state is denying it to become a better country, and that the duty of those responsible for the Catalan government is to obtain this.

Puigdemont concluded his discourse assuring that next year, his end of year address will be made from the Palau de la Generalitat, the seat of the Catalan government in Barcelona, and sending wishes for 2018 to be "a prosperous year, and a year of harmony in which we enjoy the foundational values of the republic: liberty, equality and fraternity".

I address you all, in the traditional speech before the New Year, in the most unusual circumstances imaginable. Only a year ago,  no-one in Catalonia or Europe would have even thought that we would witness the shameful and scandalous situation of having political prisoners today in jails in an EU country. And we have four of them: Catalan vice president Oriol Junqueras, minister Joaquim Forn, Jordi Sànchez and Jordi Cuixart. They are in prison for their political ideas, and everybody knows this. They are accused, as we all are accused, of having fulfilled an electoral promise and having been faithful to the Catalan Parliament with our only intention being to construct a better country, with truly effective instruments and resources to which we are justly entitled, because they are the fruit of the efforts of the people of Catalonia as a whole, of our 7.5 million inhabitants.

But in spite of this situation, I did not want to let the occasion go by to deliver you a message of good wishes for the New Year about to begin and to offer some brief reflections. In the first place, I want to thank you all for your participation in the Catalan elections of 21st December. A turnout of almost 82% is an historic democratic success, both in our home and in most countries in Europe. We have always said that we, the Catalans, are not afraid of the ballot boxes, whoever might call an election, and it is because of that that we can be content, as a people, for our participation on an election day, this time, yes, without violence or repression. Thank you for having sent a message with such clarity that it can no longer be disputed: we, the Catalans, whatever we think, want and know how to use the ballot box to resolve our aspirations and our legitimate discrepancies on which way we have to direct our collective future. We are a democratically mature people who have earned the right to become a republic of free men and women.

In the second place, I want to highlight that the Spanish government has before it a new opportunity to behave like the European democracy which it assures us it is and, therefore, to recognize the result of the elections of 21st December and to start to negotiate politically with the legitimate government of Catalonia. Catalan and Spanish citizens are expecting this, and as well, many European citizens and their governments and institutions expect it. Many citizens expect that, now that the recipe of violence, repression and liquidation of self-government has failed, finally the era of dialogue and negotiation which we have demanded for many years will begin.

Prime minister Rajoy proposed, to the members of the European Union, a fast and painless solution, an almost miraculous remedy, which would solve the Catalan issue before Christmas: suppression of the legitimate and democratic Catalan institutions, intervention in the Catalan government, a snap election for the Catalan Parliament and an electoral victory for the constitutionalist parties, which would form a docile and conformist regional government. Well, no. The last part not only did not turn out as he dreamed, but his party was relegated to last position and the Government that I preside over is able to maintain its parliamentary support.

Let's not resign ourselves to this kind of response to our demands. We have the right to defend a much better Catalonia and to have the instruments to obtain it, which the Spanish state systematically denies us. As politicians, we have the duty to do this. Because of that, as president, I demand that the Spanish Government and those that support it rectify what no longer works, that they repair the damage caused, and that they reinstate all that they have dismantled without the permission of the Catalans. The ballot boxes have spoken, democracy has spoken, everybody has been able to express themselves. What is prime minister Rajoy waiting for before accepting the results?

In a year's time, the Catalan president's New Year speech will be made, in the only way possible, from the Palau de la Generalitat, close beside all the workers of the Catalan administration who today have to put up with the rough intervention that has taken place and who I want to encourage to continue serving our people as effectively as ever. Until then, I very sincerely wish that the year that is now starting for you brings the best prospects for all of you and in all areas. I hope that it is a prosperous year, a year of progress and a year of harmony in which we enjoy the foundational values of the republic: liberty, equality and fraternity.

Many thanks and a very good 2018 to everyone.