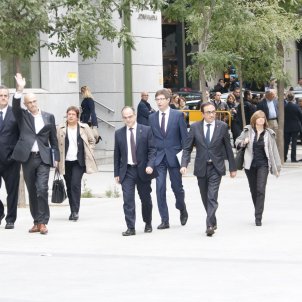 Spain's public prosecutors have presented the formal indictment against the Catalan pro-independence leaders accused in the referendum case: they reach the highest sentences possible, with 25 years of prison being sought for vice president Oriol Junqueras for an alleged crime of rebellion.

Issued on Friday morning, the indictment document also demands jail sentences of between 16 and 17 years for the other eight political prisoners accused of rebellion. These eight civil and political leaders are additionally accused of misusing public funds, while an accusation of disobedience is maintained for the members of the Catalan Parliament's presiding bureau.

The indictment document, signed by the four public attorneys who have conducted the public prosecution of the case, justifies its charges of rebellion - which by definition involves violence - by explaining how the independence movement had a strategy of "intimidatory force", as displayed through its massive street demonstrations. Also, for the first time in the judicial process, the narrative against the independence leaders ties in the role of Catalonia's Mossos d'Esquadra police, saying that they would have been able to "coercively protect the criminal objectives" if that had been required.

The prosecution organises its accusation in terms of three areas: the Catalan government executive, the Parliament and civil society groups. From here, it sets out how, since 2012, the scenario for achieving Catalan independence has been prepared and how calls for mobilization were made to achieve that objective.

The 127 page document begins by listing the names of all 18 of the political and civil pro-independence officials under investigation, before passing to a chronology of the events in the independence process from 2012 until October and November 2017, and then concluding with the sentences sought for each of the accused.

As well as the 25 years prison demanded for vice president Oriol Junqueras for rebellion, the prosecutor is calling for 17 years of prison for the same offence from civil group leaders Jordi Sànchez and Jordi Cuixart and parliamentary speaker Carme Forcadell. For the other Catalan officials who have been held for months on remand — Raül Romeva, Jordi Turull, Josep Rull, Joaquim Forn and Dolors Bassa— it asks for 16 year sentences for rebellion and misuse of funds.

Also, the public prosecution seeks seven years of prison for the three Catalan ministers, currently on bail, accused of misuse of funds and disobedience. They are Carles Mundó, Meritxell Borràs and Santi Vila.

The members of the bureau that presides over the Catalan parliament —Lluís Corominas, Lluís Guinó, Anna Simó, Ramona Barrufet and Joan Josep Nuet— are indicted for disobedience, and fines of 30,000 euros are sought along with disqualification from holding public office for 20 months. The indictment demands the same sentence for Mireia Boya, of the pro-independence CUP party.

The indictment document is still provisional. The definitive accusations will be made during the trial. When it first begins, adjustments can be made, and they are possible again before the final summing up, which would open the door to a reduction in the sentences sought in the document published today.

The arguments of the four prosecutors

"The accused attempted to bypass the application of constitutional and statutory legality and to avoid compliance with the administrative and judicial resolutions made under the auspices of this legality to achieve as a final objective —with their own laws and their own structures of state— a declaration of independence of this part of the territory", says the indictment document in its conclusions, while also admitting that, in the end, neither independence nor the republic were made effective, a "finality that was about to be achieved through criminal acts that [the accused] executed, thus putting the constitutional order in grave danger.

Rebellion, but no actual violence

"They foresaw the use of all means that were necessary to achieve their objective, including —given the certainty that the state would not accept this situation— the necessary violence to assure the criminal result sought, making use for this purpose of, on the one hand, the intimidatory force represented by the tumultuous action as displayed in large civic mobilizations instigated and promoted by them and, on the other hand, the use of the Mossos d'Esquadra police as an armed police body made up of approximately 17,000 officers, which would obey their instructions exclusively —as in fact occurred— and which, if the need arrived, could coercively protect their criminal objectives, thus eluding its compliance with its true function, of maintaining and preserving the constitutional order".

This, then, was the public prosecutors' justification of the "violence" which by definition is necessary for a crime of rebellion, explaining that the accused intended to use all force necessary to intimidate the state, even though no acts of violence have been shown to have occurred.

For the first time in the legal process, the indictment speaks about the Catalan Mossos police as a body that would react to achieve independence and thus explain the "violence" required in order to justify an offence of rebellion.

In no part of the indictment is there any evidence of actual uprising or armed violence. All the examples related to violence refer to the demonstrations that took place and to the passive resistance during the referendum of 1st October. In fact, the prosecution presents as proof of violence the Spanish police reports of officers who were injured that day.

Although the case against the leadership of the Mossos has passed through a different Spanish court, the National Audience, the public prosecutors constantly mixes the two processes to prove the supposed violence and the Catalan government's use of the force of the Catalan police. In this regard, and in spite of the fact that testimonies of both interior minister Joaquim Forn and other witnesses denied that political leaders gave direct orders to the Mossos, the four public prosecutors continue to sustain that the "leadership of the Mossos prioritised the political guidelines received from the Catalan government above their compliance with the law and with the judicial order that prohibited the [holding of the referendum]".

To develop the different accusations and explain the leadership roles of Junqueras, Forcadell and the "Jordis", the prosecutors' indictment sets out the three axes on which it bases its accusations: executive, parliament and civil society groups.

It situates the origin of the process in 2012, when former Catalan president Artur Mas and Oriol Junqueras signed the agreement for the National Transition, with Junqueras acting as ideologist, and having representation in the government once Mas had left.

The indictment focuses on a key factor: public mobilization. And it quotes a phrase from the "White Paper on the National Transition" which says that "the support of mobilized civil society could equally constitute a decisive factor for this objective [to force the negotiation with the state]".

The Spanish public prosecutors begin their indictment by giving their full narrative of the facts, referring to and interpreting the same events as in the complaint and the same as investigating judge Pablo Llarena used in his earlier ruling in sending the case to trial. But the narrative only demonstrates a presumed offence of disobedience. There is no evidence of the violence which the criminal code foresees in order to prove a charge of rebellion.

Definitively ―says the prosecutors' indictment― the pro-independence plan "clearly contemplated the option of acting on a unilateral basis and appealing to the public to oppose the response of the state, so that neither the valid legal norms nor the legal resolutions which had been passed could be fulfilled and/or executed in the face of the mass opposition displayed". 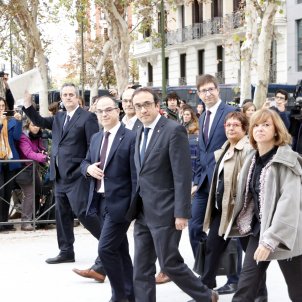 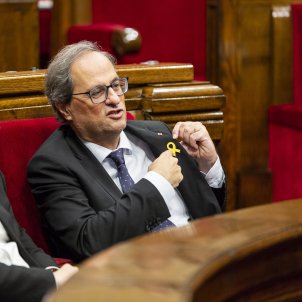