Poll: A repeat Catalan election would have benefited ERC and independence bloc

Three and a half months after the Catalan elections on February 14th and in the same week as the new Catalan government has taken office, Catalonia's public CEO pollling agency can tell us what would have likely happened in the event of a repeat election. According to its study, carried out between 11th and 19th May - in the midst of the eleventh-hour crisis between ERC and Junts and including the day of the announcement of a last-minute accord, made public on 17th May, the party of new president Pere Aragonès would have benefited and, by contrast, their coalition partners led by Puigdemont and Sànchez would have lost momentum. Pro-independence parties would have once again obtained over 50% of the total vote, with between 75 and 78 deputies (as  against the current 74), and Ciudadanos could have disappeared from the electoral map. 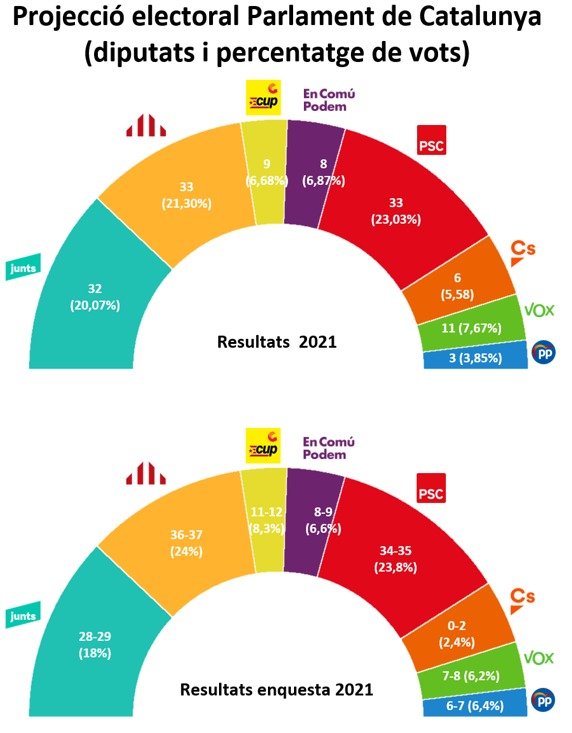 The detail of the CEO poll gives the Republican Left (ERC) victory with 36-37 seats, three more than now, beating the Catalan Socialists (PSC), which rises one or two seats in relation to February, to 34-35. If the top positions on the podium swap places, the third place stays with Toegther for Catalonia (Junts) which, however, would lose three or four MPs to win a total of 28-29 seats.

The survey by the Catalan government's opinion polling agency reveals that new elections would have helped the third pro-independence party the Popular Unity Candidature (CUP) along with the left-wing En Comú Podem (Comuns) to overtake the far-right party Vox. The CUP would become the fourth largest party in Parliament with 11-12 seats, two or three more than today. In the case of the Comuns, the result would be practically the same as they achieved in February, 8-9 deputies. The far right, on the other hand, would fall by three or four seats to a new total of 7-8.

Cs, between life and death

One of the key findings is at the bottom of the rankings. The CEO's projection leaves Ciudadanos on the verge of disappearance, with between 0 and 2 seats. Already in the 14th February vote, the disaster was epic, as they fell from 36 seats to just 6. The Popular Party (PP) takes up some of the votes lost by Cs and rises from its current 3 deputies to 6 or 7.

The pro-independence majority holds on

Looking at the overall percentage of votes won, the study says that the pro-independence parties would have repeated their feat of beating the 50% barrier. The risk of squandering the historic milestone of having won more than half the votes cast was one of the crucial reasons that ERC and Junts worked hard on mending their fences and forming a new coalition.

In the poll, the pro-independence parties whose votes are included achieve 50.2% of the total. It is worth noting, however, that the 52% total reached on February 14th was possible because of the votes won by PDeCAT - which nevertheless failed to win any seats. Currently, ERC, Junts and the CUP total 48.05%. The CEO's survey does not specify the results that the PDeCAT would now obtain, as it is an extra-parliamentary force.

The survey also makes an estimate of possible outcomes in Spain's Congress of Deputies. ERC also emerges victorious and would repeat the 13 deputies it holds right now in Madrid. The PSC would remain as second largest party force but would lose one or two seats.

In the main image, a voting in Catalonia's election on 14th February. / ACN