Seated at the table, together with the team of Italian lawyers who have led president Puigdemont's case, glasses are raised for a toast. Our hostess at Sa Mandra has explained that the sparkling wine in our glasses is a white originating in vines from Tarragona, which were brought to l'Alguer before 1546, according to Lluís Ponç d'Icard's work Llibre de les grandeses de Tarragona. They call it torbat or trobat and it is the twin of the malvasia grape from Rosselló, which comes from the same strain, although mixed with another grape varietal. Made with great care, as it is a very sensitive type of grape, it has become one of the best wines in Sardinia and has achieved a significant reputation throughout Italy. And, completely extinct in Catalonia since the 19th century phylloxera plague, it is the last remaining evidence of Tarragona vines that have remained pure in l'Alguer for centuries.

With this sparkling white and its centuries-old history, the president proposes a toast to the judicial victory that has been achieved, one more in an already ample list that Catalan exile has built up. Afterwards, some colourful conversation, songs, farewells and return to the different destinations planned, some going to Waterloo, others to Strasbourg and the rest to Madrid and Barcelona. Another phase has closed in the long contest of Catalan leaders against Spanish repression, and although everyone is aware that there will be more battles, the triumph of l'Alguer has left a redoubling of energies and confidence. One by one, judge Pablo Llarena's European Arrest Warrants have fallen, all across Europe, and, in the process of discrediting Spain, the reason for exile is becoming consolidated. "Until the next time," says one of those present, and the complicit smile of the others needs no clarification: everyone knows that the sickly obstinacy of the Spanish judiciary is as obsessive as its enormous capacity to make a fool of itself. And no one rules out that, before the Luxembourg court's ruling, judge Llarena will not start a new insanity. After all, he has just received the predictable endorsement of the Constitutional Court, the same institution that has been denying, one after another, all the arguments of the Catalan leaders. It is the machinery of the judiciary, a state within the state that self-nourishes and self-protects.

What has moved and what has changed?

With the trip at an end, the sensations left behind oblige us to take the temperature in the three areas of action: Catalonia, Spain and Europe. What has moved and what has changed after this new Catalan victory? If the magnifying glass is placed over Europe as a whole, it is clear that each judicial success of Puigdemont increases his international image as a leader and a figure of resistance, at the same time as the Kingdom of Spain becomes further degraded as a certifiable democracy. Llarena is succeeding in convincing more countries to join the list of nations that refute his juridical arguments, with the double consequence of increasing the prestige and sympathy for the Catalan leader, at the same time as the lack of democratic fibre in the Kingdom of Spain provokes shock.

It is a battle that is won in the legal field, but with each judicial success, the strength of the narrative at public level is also reinforced. That is why Puigdemont is invited to the French Assembly and to all kinds of events and conferences, and why there are many European leaders that take him into consideration. When his exile began, Puigdemont was an unknown who had had a moment of fame. He is now a respected leader and recognized as a necessary interlocutor in the great debate on democratic rights in Europe. That is why Llarena will never be able to stop him. And that is why it seems possible to imagine that it will be in Europe that we will win our national rights. There are a lot of moves yet to be played out, but we are fully engaged in the match. 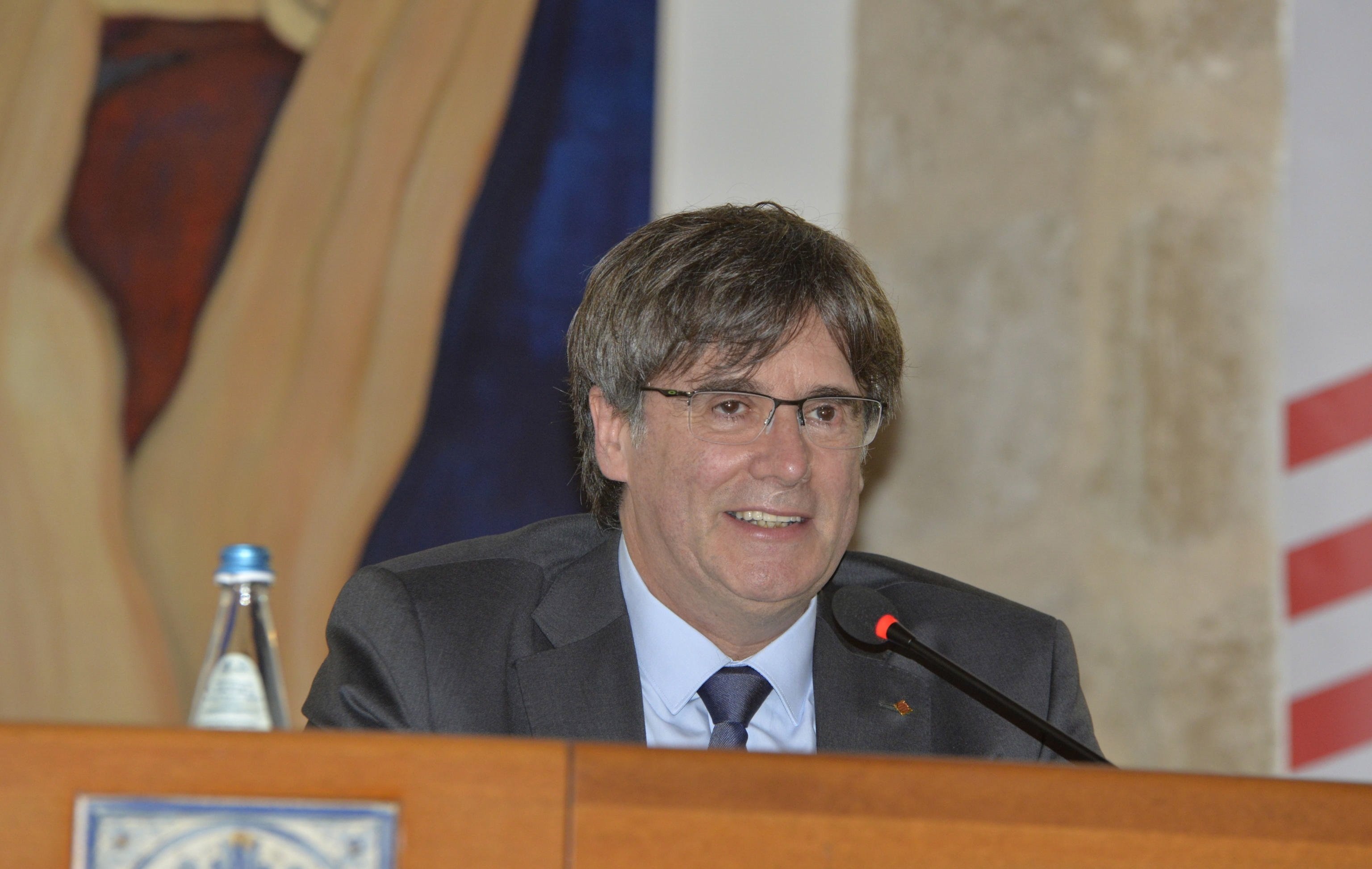 Puigdemont, visibly satisfied, at the press conference in l'Alguer after being released / EFE

If the magnifying glass is placed over Spain, some very significant strategic changes are beginning to be seen. The stubborn obstinacy with regard to the unity of Spain has not moved even a millimetre in any field - political, media, and much less in the judiciary. Spain is not a dynamic reality, nor an open debate, but a sacred idea, immovable in time and in the logic of peoples, and this anti-modern and anti-democratic conception is fully accepted in all the centres of Spanish power. It is clear, then, that the struggle and the successes of exile have not changed the Spanish Jacobin obsession, but the impotence towards Puigdemont is changing the story in some areas. Following the victory in l'Alguer, voices are beginning to be heard, both political and media, that are moving from the idea of ​​"bring him to Spain" to "leave him alone". On Monday, the editor of La Vanguardia argued this thesis, and, in some influential Spanish portals, the same strategy has been backed: if Puigdemont cannot be defeated, he must be ignored, and in silencing his victories, the reasons for exile and the damage to Spain are minimized. It is the tactic of the ostrich that has reached the grotesque paroxysm of those of Vox, who have gone from pursuing him through Europe like bandits, to affirming that they are happy if he is not in Catalonia. The pathetic fox of the fable, who says 'they're not ripe anyway' when he can't reach them...

Spain, stubbornly 'sticking to its guns'

Spain does not lose its battles until the day after it has lost them and, 'sticking to its guns' until it can't let them go, it prefers to ignore rather than debate, silence rather than speak, bury the issue in rubble instead of recognizing the conflict and resolving it. That is why Spanish front pages have hidden the great courtroom victory of the president, and that is why they are beginning to insinuate that they shouldn't even try to catch him. Puigdemont frightens the state, because he is, at the moment, the most powerful mirror reflecting the miseries of the Kingdom of Spain. And, if they don't win their argument in Europe, they hide the truth in Spain, in a process of international isolationism that has a long tradition, from the Bourbons of the 19th century to the Spain is different slogan of the Franco regime. However, for all that they cover it up, for all that they embellish, minimize and hide, the reality of exile is as stubborn as the impact of its successes is important. At some time or other, Spain will face the Catalan conflict, no matter how many times they try to avoid it. And the first moment of collision will be Luxembourg, the result of which may change the paradigm of Spanish politics. For that reason, some of those who are influencers in Spanish nationalism are starting to try and minimize the damage, downplaying the importance of the president.

If Luxembourg could change the Spanish paradigm, it could also change the paradigm of Catalan politics. In a society accustomed to defeats, especially among the pro-independence masses, the victories of exile are an emotional, social and political motor of enormous importance, the consequences of which we cannot yet assess. Unlike other strategies which are more or less conservative, which postpone the Catalan conflict indefinitely and show obvious signs of fatigue and defeatism, Puigdemont’s resilience opens up expectations, strengthens spirits and generates hope. Exile has shown that the Catalan cause was not defeated, but very much alive and that it was able to give battle and win. And this is a path of success that could change the strategic direction of the independence movement. In this sense also, Luxembourg is a very important marker.

In any case, while awaiting the next battles, l'Alguer has been the latest stage of the journey. The anthem of l'Alguer, written by Ramon Clavellet, a 19th century intellectual of enormous importance for the bringing out of l'Alguer's identity, ends like this: “Oh brothers, let's not despair! / Catalonia is making its way./ Soon the day will come / when we will all be reborn!” Nostalgia or premonition? Luxembourg, next stop...

Main image: Ponsatí, Puigdemont and Comín after the president's declaration in the court of Sassari, in Sardinia / EFE