Tens of thousands of people - more than 200,000 according to organizers, and 110,000 according to the police - have flooded Perpinyà this Saturday. From early in the morning they have filled streets and accesses to the city and have been concentrating on the esplanade of the Parc de les Exposicions, where a blazing sun has been shining since noon. Northern Catalonia has welcomed Catalan president in exile Carles Puigdemont, and his ministers Toni Comín and Clara Ponsatí in the most overwhelming event organised so far by the pro-independence movement outside the borders of the Spanish state. As if he were a rock star, according to Europe 1.

The traffic jam at the border and at the accesses to the city was such that the event had to start one hour late to make it easier for everyone to get there. However, many people were left outside the esplanade, some coaches did not even manage to get to Perpinyà. Actress Lloll Beltran opened the speeches at 1 pm, announcing that there were 150,000 people. "Do not try to enter. There is no room for anyone else", she warned. Organisers assured, from the stage, at the end of the event, at 3 pm, that more than 100 coaches had not managed to arrive, but that the concentration has been estimated at 200,000 people. 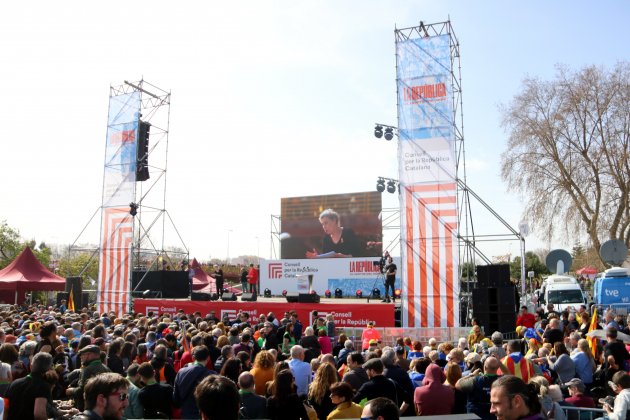 In the closing speech, Puigdemont did not hide the differences that divide pro-independence forces and called for the movement to be prepared for the "definitive fight", which will urge "to overcome errors" and overcome "doubts and weaknesses". In fact, reflections on the need to overcome these differences have somehow been present in all speeches.

"We have to get prepared by coordinating our actions, getting organised all over the territory, with a network that controls the territory, fighting the repression of the Spanish state from this network around the Council for the Catalan Republic, rejecting the monarchic regime born from Franco's regime and rejecting the abusive affairs of this repressive state”, he proclaimed.

Puigdemont expressed his message beyond claims for independence and, in a wink to the rest of Spain, assured that an independent Catalan Republic "is the only guarantee to put an end to a monarchical regime inherited from Franco, unjust and allergic to Catalan identity".

Only the three exiled politicians and the head of the Council of the Catalan Republic in Northern Catalonia Joan Lluís Lluís spoke on the stage, the rest of speeches were shown on video. Catalan vice-president Oriol Junqueras and general secretary of Catalan Republican Left (ERC) Marta Rovira have also spoken on behalf of Catalan Parliament speaker Carme Forcadell and Catalan ministers Dolors Bassa and Raül Romeva

"Today Perpinyà is once again a door to the world and to freedom. Thank you for being here". That is how Junqueras started his audio message in which he warned that pro-independence movement must not lose strength. The appearance of images of the dialogue table during the intervention of the Republican leader has caused some whistles among the public. "When there are many of us, when we act in a coordinated manner, without reproaches and without confusing our adversaries, that is when we move forward," he said, also pointing out the differences that have divided pro-independence forces.

In turn, Rovira has called for “closing ranks again to move forward" and to democratically win the Catalan Republic.

Comín has also spoken to demand coordination in the pro-independence movement. "We already exercised the right to self-determination, and you defended it. But, unfortunately, we will not only earn respect for this right at the polls, but we will also have to do more things peacefully, democratically," he said.

For this reason, he warned that "more actions, commitments and sacrifices will be needed, always from non-violent struggle", and demanded "preparation" and creating the conditions for "this confrontation to go well."

Ponsatí, against the dialogue table

Clara Ponsatí greeted one by one those who suffered reprisals, mentioned the blockings on Barcelona's Meridiana Avenue, the occupation of the airport and of Plaça Urquinaona. “We are with you and we need you more than ever," she said, while the public responded "we will do it again” (“ho tornarem a fer”). Despite saying that she is not used to having a leading role in this type of events, Ponsatí gave a stump speech with a highly remarkable tone, and she stressed out the need for pro-independence supporters’ unity and perseverance. "Without your push we would never have had the October 1st referendum. Your persistence is the key that will open prisons and point the way for our return from exile, and your courage will bring Catalonia’s independence," she said.

"We will never fit in the Spanish state unless we stop being Catalan," she warned. She considered as normal the "disorientation" that the pro-independence movement has suffered after the "defeat", but warned about the need for reactions and not to trust promises of dialogue. "Let's not be fooled by photographs of deceitful tables that only seek to gain time for Pedro Sánchez," she said.

Singer and activist Lluís Llach performed a cappella together with Roger Mas and Gerard Jacquet a song that expressed the gathering of people from the north and from the south (“Venim del Nord, venim del Sud”), in one of the most emotional moments, prior to Puigdemont’s speech.

The delegate of the Council for the Catalan Republic in Perpinyà, Joan Lluís Lluís, emphasised the solidarity between Catalans north of the border, "which exists from the very moment when the French and the Spanish put a border in the middle, since the 17th century." "Since the 17th century, the Catalans, from the south or from the north, have found refuge and welcome on the other side of the border", he remarked. He has admitted the decline that the language has suffered in Northern Catalonia, for which he blamed the French state, but also that Northern Catalonia has shown that "it is possible to be Catalan without being Spanish."

At the end of the event, the esplanade was emptied at a surprising speed, considering the thousands of people that had been there for hours and who, at that very moment, resumed their journey to the other side of the border.