The debate among Mallorcans on whether the Spanish monarchy should be abolished has reached The New York Times. The US daily has published an article based on the informal consultations being held in Mallorca this weekend on the form of government that islanders want. And the story focuses specifically on the vote on the question held in the village of Valldemossa, a week ago.

The Mediterranean island of Mallorca has long been a haven for the Spanish royal family: former king Juan Carlos and his family have their summer palace there, and years ago, local businessmen even gave the monarch a luxury yacht. However, the newspaper notes, this connection would be broken if the majority of those who voted in the Valldemossa poll had their way. In a village with a population of 2,000, and where Juan Carlos even holds the title of honorary mayor, the abolition of the monarchy was approved by 97 votes in favour, with 25 opposed and one blank vote. 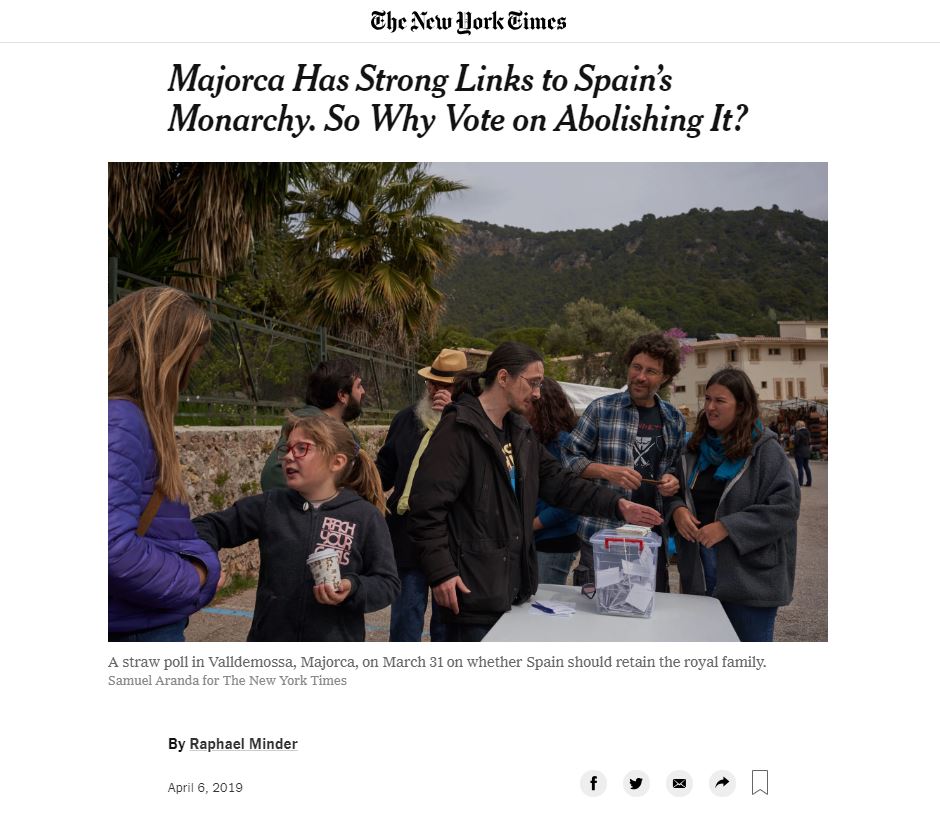 Among the elements quoted to explain the anti-monarchist feeling, the article speaks of the trial, held in the Mallorcan capital Palma, of the current king's brother-in-law, Iñaki Urdangarin, on corruption charges. This was part of a picture of "falling popularity" of the royal family in recent years.

Furthermore, the text notes that "it is difficult" to measure the current level of support for the royal family, especially since the public CIS polling agency eliminated its regular question about the monarchy in 2015. "Under pressure from leftist politicians, the research centre is expected to reinsert the royal question in its surveys," the story states.

Writer Raphael Minder quotes a Valldemossa member of the right-wing Popular Party who saw the poll as "planting a dangerous seed" that could lead to something like the current political conflict in Catalonia. This view is disputed in the article by poll organizer Dídac Alcalà i Villa: "Removing the monarchy is about having a modern state", he said, a matter on which there is "broader consensus" than for territorial questions.

The Mallorcan local referendums are symbolic and non-binding, but that has not lessened the activity of those campaigning for the votes. The consultations were organized local groupings, under the umbrella of cultural group Obra Cultural Balear. They were unable to use the official electoral roll, and thus opened up the poll to all residents of the municipalities aged over sixteen.

The Mallorcan vote already has a precedent. At the end of February, a similar consultation was held at the University of the Balearic Islands (UIB), where the question was "Are you in favour of abolishing the monarchy as a form of government and establishing a republic?" A total of 1,475 people took part and 91% said 'yes.'