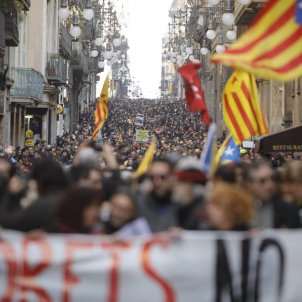 While the wait goes on for a consensus to appear on how Catalans will respond to the forthcoming Supreme Court trial verdicts, a new proposal for a strategic and unitary action has arisen from the pro-independence public, with a plan for a major mobilization that would stop the wheels of Catalonia's economy from turning until negotiation with the Spanish state begins.

Representatives from different collectives such as the ANC, CDR, and Democratic Tsunami, along with individuals disappointed with the Catalan political parties, have joined forces and set in motion a platform known as Ens Plantem - 'We Stand Fast' - which aims to maintain the contention with the Spanish state, seeking to recover the spirit of the Catalan independence referendum on October 1st, 2017, and the massive national stoppage in Catalonia two days later.

The action, intended to take place before October 27th, aims to be "precise, specific and effective", and always based on non-violent tactics, according to sources within the organization consulted by this newspaper. The initiative has arisen from several different points of Catalonia, and seeks to coordinate all the different agents in the independence movement, but externally to the political parties, civic and social entities, unions and other types of institutions.

The mobilization's epicentre will be located in one of the most important streets in Catalonia - which will be announced officially in the next few hours - and Ens Plantem is calling on people to create a permanent mobilization.

The intention is to disrupt the economy of the country by occupying space with a camp, to be maintained indefinitely, which will hinder mobility and prevent the usual functioning of services and infrastructure, as well as "harming the companies of the Ibex 35", refering to the large companies that belong to the major Spanish share index. For the mobilization to be sufficiently powerful, the organizers estimate the minimum participation will be 10,000 people.

The organization does not foresee the mobilization functioning as a relay, with people arriving to relieve others, but there is provision for it to break into a number of smaller camps across the rest of the Catalan highway network. They also state that they will not interrupt other actions that are called in response to the Supreme Court verdicts.

The Ens Plantem sources that ElNacional spoke to stress that none of the leading members of the platform are members of any political party and they are dedicating themselves exclusively to preparing this action, regardless of their group of origin. At the same time, they state that their principal objective is to get more social actors involved in the platform and that, furthermore, the platform has been created solely for this one action, which will culminate its work.

Ens Plantem has begun to publish videos to call for mobilization, featuring the recent protests in Hong Kong and the Otpor movement in Serbia, led by a group of 12 young students who managed to overthrow the Milosevic dictatorship through non-violent resistance and a call for elections.

Today, Ens Plantem has activated a Twitter account which they will use to inform of their upcoming actions.

Details of the mobilization are to be decided this Wednesday at a meeting between the organizing groups.