Klaus: “It is legitimate for Parliament to declare independence without a referendum”

Václav Klaus (Prague, 1941) was the leader of the “Velvet Divorce” that led to the separation of the Czech Republic and Slovakia in 1992-93, with the establishment of two new states in the heart of Europe and the dissolution of the old Czechoslovakia. Klaus was the Prime Minister of Czeckoslovakia first, and then the President of the Czech Republic, a post of which he relieved Václav Havel, the hero of the revolt against the Soviet power known as the “Velvet Revolution.” The Czech politician receives El Nacional for an exclusive, taking the opportunity of his visit to Barcelona during which he has met the Speaker of the Catalan Parliament, Carme Forcadell, and Foreign Minister Raül Romeva, as well as giving a talk at the Catalan seat of government, the Generalitat, on the independence process in his country. The first time he visited Catalonia was in 1993, soon after the proclamation of independence of the Czech Republic. 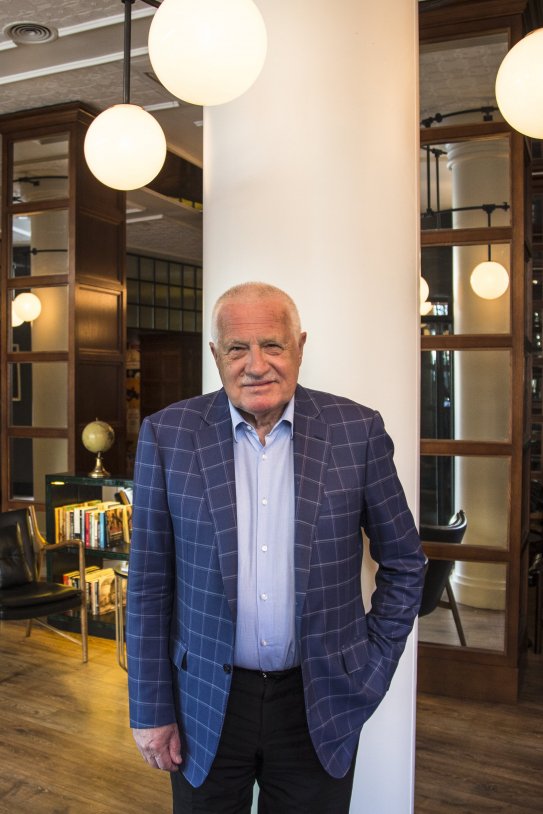 It will soon be 25 years since the division of the Czech Republic and Slovakia took place. How do you recall that event which you led?​
We accepted the division of the country, although the Czechs were quite happy with a common state and it was Slovakia that wanted a state of its own. We understood that we had to carry out the division with the cooperation of both sides, that it could not be a one-sided process, and we knew that we both had to be cooperative and civil in order to achieve a compromise, and so that’s what we did. This was the element, the main reason we were able to divide the country quickly and amicably.

As a Czech, how did you feel about the division? Were you saddened by it?
My wife is a Slovak and we have spent most of our vacations together in Slovakia. In addition, I played basketball in the Czechoslovak League, and was used to travelling throughout the country. Regrets or no regrets? We have not lost Slovakia, the relations between the two countries are absolutely perfect, there is freedom of movement from one side to the other, there are many personal relationships. Talking about losing Slovakia is inappropriate as it would mean that in the past Slovakia belonged to us and that it was our property, and that we had lost it. That is not the case.

As the Prime Minister [of the Czech Republic still within Czechoslovakia], did you feel under pressure to accept the separation or did you feel comfortable with the idea?
The independence of the country was at a very critical moment in the transition towards a free society after the fall of communism. We believed that the fundamental task was to achieve that, and we did not want to spoil that historical moment with a conflict between Czechs and Slovaks. For us, going ahead with the transition from Communism was the number one priority.

What parallelisms do you find with the Catalan case?​
The Czechoslovakian process had a different argument from that of Catalonia, and it is that context in which it was carried out. Separations and divisions of different countries are unique, singular, unrepeatable and different. We could compare it to marriages and divorces. The case is the same, but the situation is very different. A facile comparison might be inappropriate. However, I simply understood that Slovakia wanted to go its own way. For the first time in history, they wanted to create their own sovereign state and become an entity on the international scene and not just a part of the state. I accepted it, without tears.

I understood that Slovakia wanted to go its own way and I accepted it, without tears

In 1992, the elections in Czechoslovakia were won by pro-independence parties, a situation similar to that of the 2015 elections in Catalonia. Is a parliamentary majority enough to declare independence or is a referendum required?
Talking about referendums seems to be fashionable, but I am basically in favour of indirect democracy. I am not a defender of direct democracy, neither philosophically nor politically. I favour representative government. Referendums are an additional instrument that help in some cases, but not in in others. When you look in from the outside, with the Catalans talking all the while about a referendum, it seems as if you are talking about another argument to convince the authorities in Madrid. For me, a referendum would be interesting and relevant at a given moment, if you are not sure whether the majority of the population wants separation.

Do you believe there is a sufficient majority in Catalonia in favour of independence...
I’m afraid the Catalans are already convinced that the majority in Catalonia wants independence from the rest of Spain. So in your case, a referendum is not a real way to find out if the population wants independence or not, it is not necessary. I think you are already convinced, that you already know what people think. The elections are good enough, from my point of view.

The Catalans are convinced that the majority want independence, and a referendum is not necessary. The elections are good enough 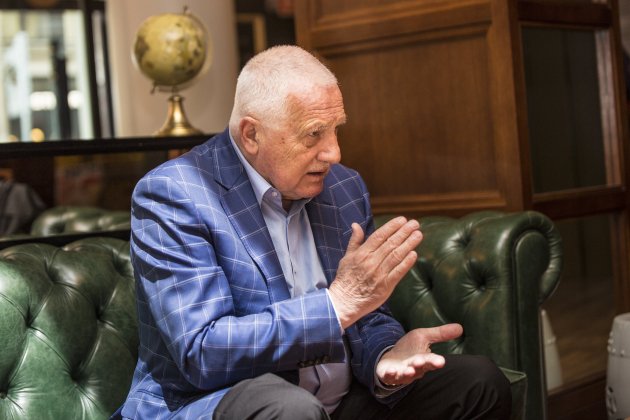 So declaring independence without a referendum is legitimate?
For me, elections are the basis of democracy. Your elected representatives, those who sit in Parliament, are the decision makers. Many things are decided there, so why not that?

What is you view of Madrid’s attitude towards the independence of Catalonia?​
Many Czechs were happy with Czechoslovakia, but we understood that the Slovaks did not feel the same, and they were not as happy. The authorities in Madrid should accept the same for Catalonia.

The Czechs accepted the situation in Slovakia. Madrid should do the same with Catalonia

So you think they should accept the process, even though the Constitution does not provide for the independence of a part of Spain?​
The Constitution is not something that is handed down from the heavens, nor something over and above human resolution. The Constitution is a human construct, a project and an instrument made by humans. What is more, it was a law created by Parliament. I am sure it can be changed again by voting in Parliament. I do not think it's a divine power. The parents of the Constitution would be very angry with me if they heard me say this, but it is a law made by humans and not handed down from the heavens.

Do you believe the European Union will accept an independent Catalan State?
I am sure the European Union will try to intervene, because they want stability and they try to prevent any convoluted dramatic change. On the other hand, I would tell Brussels that if they constantly talk of the Europe of nations, they should be glad that another strong European region is created through the division of Spain.

I wouldn’t say the EU will help Catalonia, I wouldn’t expect it to; the European Union is bureaucracy

So, in the end you don’t think the EU will help Catalonia somehow in this process.​
I wouldn’t say they will help, I wouldn’t expect them to. The European Union is bureaucracy, I think that in this case they will behave as such too.

Would the independence of the Czech Republic and Slovakia be more difficult today, as members of the European Union?​
I always say we had a good opportunity to do it then. During the Soviet era, with communism, it was impossible, and in the era of the EU it would be difficult. We did it between both eras and it was a good moment.

Do you think that a federation between Catalonia and Spain might work?
I think the position of the Czechs is similar to the situation of Spain. The central authorities in Madrid do not feel the need to create their own structures. In this case, however, I was on the Czech side. We considered it unnecessary. In Catalonia, it is you who have to decide what you want, whether you want to be a sovereign State, which is impossible in a federation, or if you want to be a part of Spain with more powers. It's your decision. You know whether you are dissatisfied, if you feel unrepresented in Madrid, if you think you pay more than other regions... It's your decision. 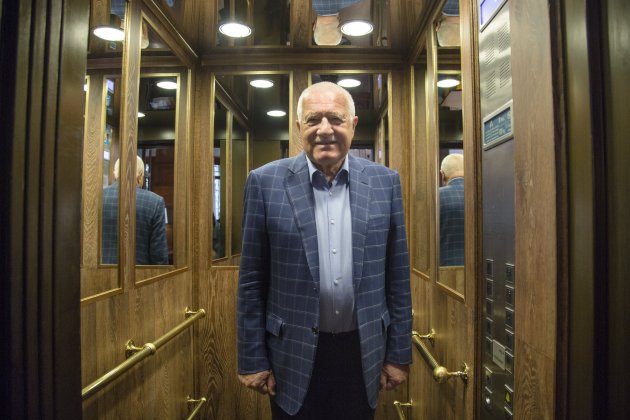 There are federations that work very well, like Germany, but there are others that don’t

But, in general, do you think federalism works?​
Some might argue that there are federations that work very well, a good example might be Germany. But there are also examples of federalism that do not work. It depends, I do not have a strong position on this.

You visited Catalonia twice in the nineties. Do you see any differences now?
I only spend a few hours on my visits and I cannot get a good picture, but this time Barcelona seems to me more beautiful than ever.

And politically?​
I don’t know. It’s hard to say.

Catalonia must take a brave, courageous decision, and say to the government in Madrid: Enough!, ‘Finito!’

What do you expect in the coming years? Do you think the next time you come you will visit an independent State?
The last time I was here was 18 years ago, and in another 18 I will not be alive any more. But if you really want to get results, you have to make brave, courageous political decisions. Waiting and writing articles and interviews about whether the majority is sufficient, and hoping they’ll read it in Madrid... I don’t think that's the way. I think Catalonia must take a brave, courageous decision and say to the Government of Madrid: Enough! ‘Finito!’ Otherwise it’ll be impossible.