Junqueras, from prison: "We are the wind of freedom" 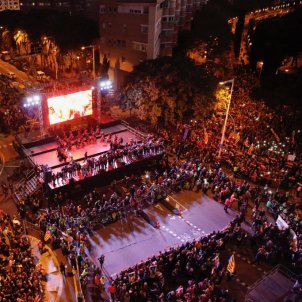 A message from Catalan vicepresident Oriol Junqueras, currently held in Estremera prison in Madrid, was read out at this Saturday's large demonstration in Barcelona calling for the release of Catalonia's political prisoners.

The letter, written by the vicepresident from prison, stated that despite being the "scapegoat", both he and all the rest of the prisoners were “the wind of freedom”.

“We are thirsty for justice and freedom”, added Junqueras, affirming that “if we don't prostrate ourselves, they will try to ruin our lives" but that, in spite of everything, "if we fight, we will come through it."

The reading of this letter accompanied that of messages from all the other prisoners, which were read out by family members and friends. The daughter of Interior minister Joaquim Forn read out a letter from her father, giving his thanks for the "great warmth" offered to him, because "however high the walls are, your spirit will still reach us".

Next, members of the families of ministers Meritxell Borràs and Dolors Bassa, imprisoned in the Alcalá-Meco prison, read a joint letter, reminding the public that "our physical distance doesn't prevent us from feeling you close by". "We know that when you say we are not alone, you mean it", the ministers add.

The partner of the Justice minister, Carles Mundó, read his letter, saying that “your support gives strength to us, and  especially to our families", and “we have to carry on making politics that matters".

In the case of minister Josep Rull, it was his wife who read the letter, which recalled the immortal lines of Catalan poet Salvador Espriu "we will stay loyal for evermore to the service of this people", from his poem Inici de càntic en el temple, and continuing "we are the legitimate government because we were elected at the ballot box" .

Raül Romeva, also in prison, reminded the public via letter that "we must not allow ourselves to be provoked, we don't wish harm on anyone" and "we can't let ourselves be aroused by violence or vengeance".

Finally, the daughter of minister and government spokesperson Jordu Turull read a message from her father, calling for "unity" because "our division is the hope of the Spanish state". "They have jailed us unjustly, and they have our bodies in prison, but our hearts are with you", said the minister's letter. 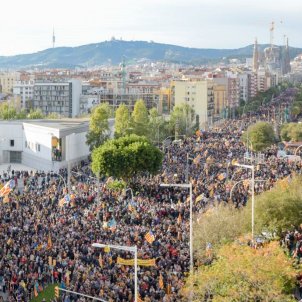 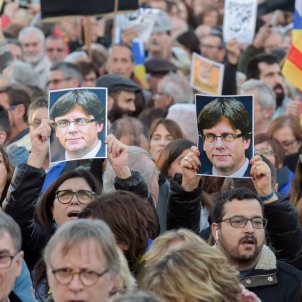 Catalan Republic Messages from Puigdemont, exiled ministers to today's rally: "We have the right to be a new country" El Nacional