Indignation in European Parliament over leak of confidential report on Puigdemont

The leaking of a confidential report on the request to waive the parliamentary immunity of the Catalan MEP Carles Puigdemont (JxCat party) has caused indignation in the European Parliament, according to parliamentary sources in the ACN news agency. "It's not how these things must be done," said these sources, stressing the confidentiality of the parliamentary procedure which allows for the immunity from prosecution of MEPs to be waived if the full chamber gives its approval.

The report for the European Parliament's Committee on Legal Affairs (JURI), prepared by Bulgarian ultra-conservative MEP Angel Dzhambazki, has been leaked to the Spanish newspaper ABC, which published a news story on it this Thursday stating that the report will propose the acceptance of the Spanish Supreme Court's request for Carles Puigdemont's immunity to be lifted. If this occurs, Belgian judicial authorities could continue processing the European Arrest Warrant seeking the Catalan president's extradition to Spain. 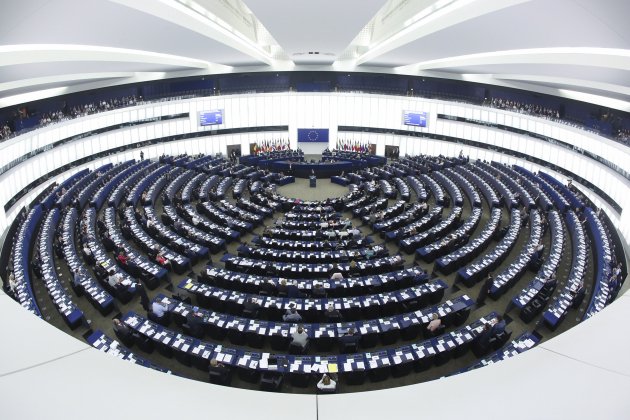 An image of the Strasbourg chamber of the European Parliament / ACN

For his part, the chairman of the parliament's Committee on Legal Affairs, Adrián Vazquez (Spanish MEP for the Ciudadanos party), has warned that breaching confidentiality "may mean opening a disciplinary procedure" against those responsible for the leak.  "It continues to surprise me that there are people who still do not understand that this is not a game which you can use to gain political advantage", stated Vázquez. However, in the Ciudadanos party they believe it would be difficult for the committee chairman to investigate what happened.

Puigdemont's defence lawyer intends to file a formal complaint with the president of the Parliament, David Sassoli, over the alleged breach of confidentiality. Parliamentary sources say that Sassoli has no margin for action on the case because it is "an autonomous procedure." The JxCat legal team has already several times threatened to challenge a hypothetical waiver of Puigdemont's immunity in the European Union courts due to "errors of form" in the procedure. The EU Court of Justice has jurisdiction to assess such cases and would be expected to rule on this one if it falls into their hands.

In this case, MEPs belonging to the Committee on Legal Affairs received Dzhambazki's report on Wednesday afternoon to prepare for next Monday's debate on the Spanish court's request. The European Parliament says the procedure is confidential and that committee members cannot reveal the contents of the report before the scheduled vote on Tuesday.

This document is precisely what has been leaked to the Madrid newspaper. Puigdemont this Thursday criticized that the leak has occurred while recalling that it is not the first time this has happened.