In Germany, the recovery plan presented this week by Spanish prime minister Pedro Sánchez has not gone down well, and the first criticisms are appearing. Leading German business newspaper Handelsblatt has criticized that the reforms planned by the Spanish government are muddled and have generated divisions within the executive itself, and has recalled that Spain has Europe's worst record on the so-called ni-nis - young people who neither work nor study - due to Spain's high school dropout rate combined with high youth unemployment.

"The funds will be used for both investments and reforms. But this is precisely where the problem of Spain lies: Sánchez listed numerous reforms that would be part of the plan. However, in key issues such as labour market reform, the pension system and fiscal policy, so far there has been no consensus between the parties, and in some cases not even within the governing coalition”, laments the German business daily.

The newspaper is concerned that Spain is the land of micro-businesses, which "is one of the main reasons why the Spanish economy is one of the least productive in the EU." It also points out that Spain suffers from "the highest school dropout rate" in the EU as a whole, and that youth unemployment at the end of 2020 was 41%, more than double the EU average. "A quarter of all employment contracts are limited, more than in any other EU country," it adds. And it recalls that Sánchez himself also cited low productivity as the "Achilles heel" of the Spanish economy and the reason for low wages in Spain compared to other European countries. 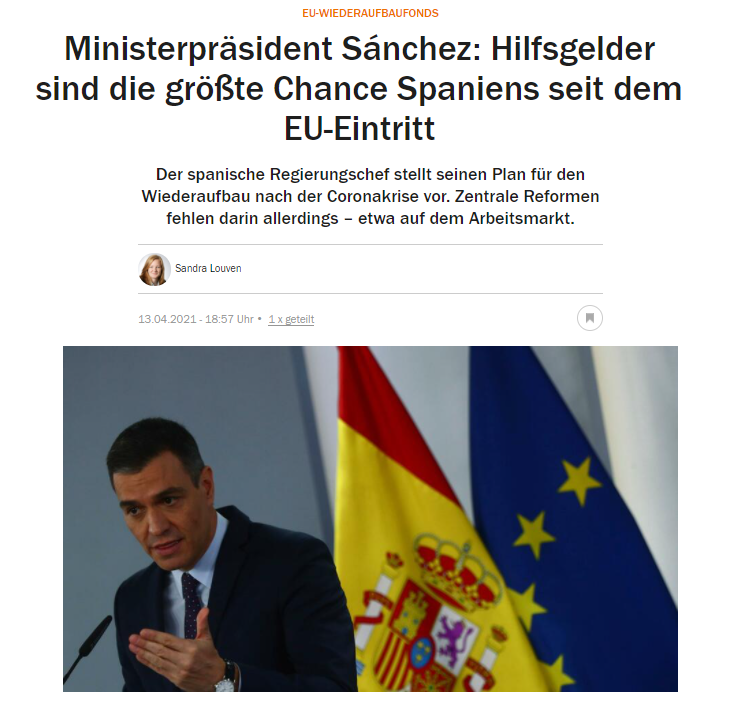 "Sánchez: aid money is the biggest opportunity for Spain since joining the EU. He presents a reconstruction plan that has no key reforms, as in the labour market," headlines Handelsblatt

Handelsblatt notes that Pedro Sánchez wants to solve these serious problems of the economy by taking advantage of the investments that will come through the European funds - 70 billion euros in 3 years - but asserts that reforms must also be made. It acknowledges that the Spanish government has decided on some new regulations, such as the introduction of dual training and reforms in job insertion services, "which up till now has been completely inadequate", but believes what is planned is still insufficient.

The recovery plan presented by Sánchez is a prerequisite for Madrid to receive "the gigantic sum of 140 billion euros" from the European reconstruction fund", says the newspaper, referring to the sum of the 70 billion euros of non-repayable funding, and another 70 billion in loans. "Only Italy will receive a higher figure, 209 billion euros," it points out. "Sánchez presented the main features of the project to Congress on Wednesday and the cabinet is expected to adopt it next week," added the article.

As a pre-requisite to receiving the funding, Brussels has required member states to commit to specific targets agreed with the EU Commission in their reconstruction plans. "Sánchez's plan is therefore of great importance, for Spain itself, and also for the cohesion of the EU. The other member states will pay close attention to the way in which the second largest recipient of funds manages them,” concludes Handelsblatt.