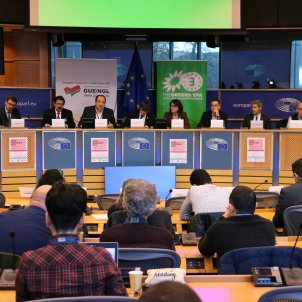 Two Spanish far-right supporters have tried unsuccessfully to disrupt a European Parliament event that focused on Lawfare - the judicialization of politics. The event, organized by Catalan MEPs Diana Riba and Carles Puigdemont, Basque MEP Pernando Barrena and lawyers Gonzalo Boye, Andreu Van den Eynde, Christophe Marchand and Valeska Teixeira, was intended to put a spotlight on the use of this judicially-based political strategy, looking at cases in both Europe and Latin America.

Although the discussion had proceeeded normally, when Puigdemont called the meeting to a close, two Spanish nationalists among the public raised their voices and shouted slogans in favour of the unity of Spain. However, they were unable to intrude on the meeting for long, as it was ending.

The two men responsible for the scene were the president of far-right Vox's Girona branch, Albert Tarradas, and Spanish journalist Cake Minuesa. While the attendees were already on their way out, the pair accused Puigdemont and lawyer Boye of being supporters of the ETA terrorist group and chanted "Without law there is no democracy".

During the event, the lawyers of Catalan pro-independence politicians Carles Puigdemont and Oriol Junqueras, and the attorneys of Ecuadorean ex-president Rafael Correa and former Brazilian president Lula da Silva denounced the use of lawfare - a portmanteau word combining "law and "warfare" to describe the political strategy of using legal means to deliberately pursue enemies.

Translation:
"Discussion at the European Parliament on the use of judicial devices to pursue political ideas and opponents, with first-class speakers". — Josep Lluís Alay

The lawyers taking part warned that behind their clients' legal cases are political motivations, and they denounced the use of the judiciary to punish dissidents.

"Lula da Silva's lawyer, Valeska Teixeira, is participating in a conference on Lawfare in the European Parliament with @KRLS Puigdemont, @pernandobarrena and @DianaRibaGiner. The prosecutor who accused Lula is now Minister of Justice under Bolsonaro." — Aleix Sarri i Camargo

"You don't need a coup anymore when you can twist the law," said Gonzalo Boye. The former president of Honduras Manuel Zelaya and ex-president of Peru, Ollanta Humala, also criticized the "judicial war" waged to remove them from power. 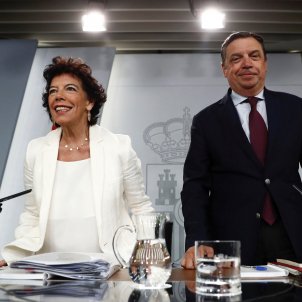