ERC is to oppose Ada Colau's city budget: "Lacking any plan for Barcelona"

He gave the warning last week and now he has confirmed it. The president of the Republican Left (ERC) group for the Barcelona city council, ​​Ernest Maragall, is rejecting the municipal budget proposed by mayor Ada Colau. "So far, the proposed budget is a long way away from being in the city's interest. Barcelona needs a change of direction in cultural and educational aspects, and in its city model, among other things," warned Maragall last week in an interview with Spanish public broadcaster RTVE.

Today, he added, there are "many reasons to vote against it" because the Barcelona en Comú group "have earned it by what they've done" after seeing repeated breaches of the last budget that ERC did support. Maragall echoes the feelings of many who in recent months have spoken out against the council's management of the city: "We detect a disregard for the neighbourhoods and the city, and a lack of ambition and plan for the city. We say 'no' with absolute conviction and responsibility."

Announcement from the Rambla

ERC's announcement was made in front of the digital clock announcing the delay in the long-promised improvement works on the Rambla. This Monday marks 1,999 days and on Tuesday it will be 2,000 - about five and a half years. This, they say, is an example of non-compliance with residents and breach of agreements with ERC. They recall that the reform of the Rambla was agreed in the 2020 budget and announce that, for this reason, they will present a proposal to the city's planning committee this week to request the start of the work next year. Another "serious breach by the council" that has been denounced by both ERC and Junts.

In the November committee meetings, ERC will also ask a question about the Jardinets dels Gats, a Ciutat Vella-based association that works for the care and protection of stray and abandoned cats, and which could now be in danger due to the plan to join Plaça Gardunya and the old Hospital de la Santa Creu that the municipal government intends to carry out. "We are not in favour of this redevelopment and we want the government to tell us if this will affect the Jardinet dels Gats and what it plans to do about it," said ERC MP Jordi Coronas.

In the planning commission, ERC will also ask the city government to take definitive measures to solve the problem of the rubbish tip on Carrer de l’Avançada in the Bon Pastor neighbourhood. "The municipal government has limited itself, firstly, to removing the sign warning of the fines that people could receive for non-compliance and, secondly, to carrying out a clean up, but meanwhile, we now know that the trash is being left there again," affirmed Coronas, who has demanded an end to this illegal dumping of waste and rubbish that affects the environment and public health of the neighbourhood. 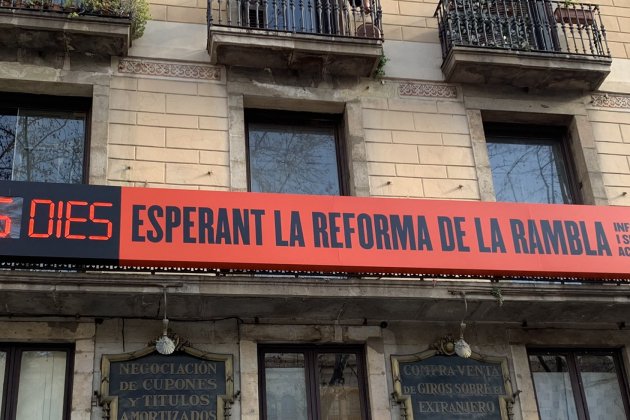 The road ahead is looking bumpy for the Colau council. The budget are due to face their first vote in the economic committee on Wednesday, as a prelude to the final debate in the December plenary, and they won't have the necessary support at the moment.

It's a situation very different from those of 2020 and 2019. In last year's budget negotiation, which financed the current financial year, Colau agreed with Maragall on a budget of 3.2 billion euros. The agreement focused on combating inequality and the social emergency with agreements such as 300 million euros for housing, children and support for the local economy. At the time, Colau made a gesture of acknowledgement to ERC: "We have brought the plan to fruition with ERC and it will allow us to have the highest municipal budget in the history of the city council."

Now, Maragall now sees a "lack of vision." That’s why the Republican believes he needs to send an explicit message of “distancing and availability, we are ready,” he said.