Diplomatic friction between Russia and Germany over the question of Catalonia

A certain diplomatic tension has appeared between Russia and Germany as a result of last week's protest incidents in Catalonia, to the point that it came to the surface this week at the German government's regular press conference, conducted by federal spokesperson Steffen Seibert. The reason for the edginess is that Germany tends to criticize policing excesses in Russia, but now Moscow is complaining that Berlin has stayed silent while similar scenes have occurred in the EU - and to be specific, in Catalonia.

The Russian state news agency Sputnik attributes so much importance to this supposed "double standard" that it has devoted a powerful report to the issue (link in German), complaining that the German government has not condemned police violence in Catalonia, although it doesn't hesitate to do so when similar scenes take place in the country led by Vladimir Putin or, indeed, in China. Under the title "Political double standard: why police violence is barely criticized in Catalonia", the Russian agency makes the same point as the official Chinese media, Global Times, did yesterday when it also accused the West of hypocrisy for its harsh condemnation of police actions in Hong Kong while it kept its mouth shut about what was happening in a place so close to the EU's heart as Catalonia. 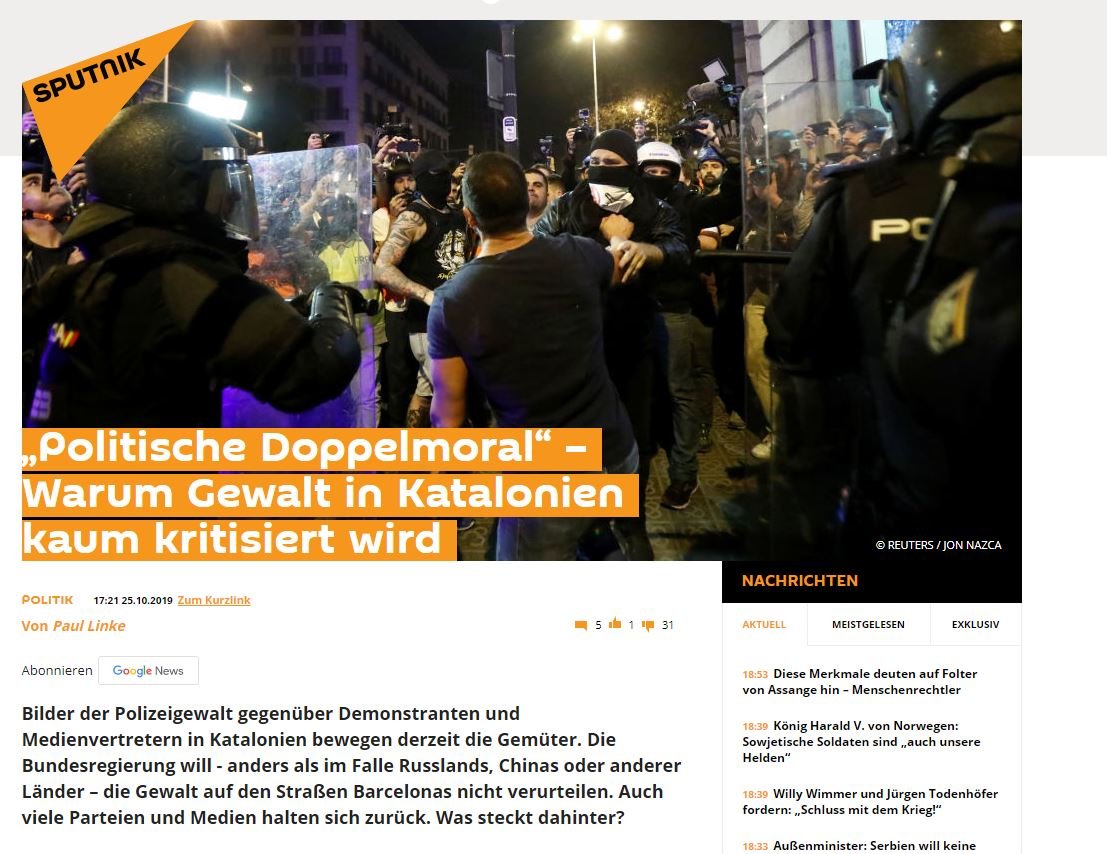 "The images of police violence against protesters and media professionals in Catalonia are horrifying viewers. Unlike [its reaction to similar stories from] Russia, China and other countries, the German government does not want to condemn [police] violence on the streets of Barcelona. Many political parties and the German media are also being contained. What's behind this?" asks Sputnik.

"According to the Spanish interior ministry, almost 600 people, including some policemen, have been injured in the riots in Catalonia to date. Almost 200 suspects have been arrested. However, the images of violence against protesters, and also against people not even involved, have left audiences aghast," it adds.

Sputnik recalls that in the German government's latest press conference, on Monday, government spokesperson Steffen Seibert was asked about Catalonia. "The violent reaction of the Spanish police forces to the protests is highly controversial, but the German government is reluctant to condemn police violence in Catalonia, unlike in Russia or China," says the Russian report, adding that, on the other hand, the official German comment from Steffen Seibert, was this: "The conflict in Catalonia must be resolved within the framework of the Spanish constitution and the Spanish legal system." According to Sputnik, Seibert said that he wouldn't "comment on the internal political issues of a partner country, such as Spain."

A journalist for Russia Today (RT) then asked the German government spokesman why, on July 29th, the deputy spokesperson for the German government, Ulrike Demmer, had opened the regular press conference with a "condemnation of police violence in Moscow". Sputnik recalls the answer given by Seibert on Monday: "What you are raising is because we do indeed judge the constitutional Spanish state differently from the Russian state, and how it deals with opposition and protest by its citizens."