President Quim Torra today appealed to all political parties in the Catalan Parliament to form a "grand pact" to obtain the resources Catalonia needs to overcome the crisis caused by coronavirus. He called on MPs to "put aside partisanship" and to support the government, asking them to "press" the Pedro Sánchez executive to make it "comply". "Don't let Catalans down, now we need it more than ever," he asked, addressing in particular Pedro Sánchez's allies, the Catalan Socialists (PSC) and the Comuns (CatComú) during the session on the Covid-19 emergency that was held in the Barcelona chamber today.

Torra announced that he would be sending a letter to the Spanish PM, Pedro Sánchez, later this week asking him to apply for a loan of 5 billion euros via the European Stability Mechanism on behalf of Catalonia. This amount represents 2% of Catalan GDP. He will also send a letter to ESM chief Klaus Regling confirming that he would accept the ESM conditions on repayment of the loan.

"Catalonia cannot wait to receive European aid next year. I trust that prime minister Sánchez will not put any obstacles in the way of this and will handle it on behalf of Catalonia," he said.

Addressing the chamber which was still half empty due to distancing restrictions, Torra repeatedly appealed to the parliamentary parties.

"We are ready for this great pact to get all the resources that Catalonia needs today. Is parliament ready? Ladies and gentlemen, shall we go toward this together? Let's be loyal to the citizens of Catalonia. Now is the time to front up for our fellow citizens. We can't hide from them. We can't look the other way," he warned. He had, however, earlier stated that he was satisfied with the response given by the parliamentary groups during the pandemic.

He also announced that on 21st July, his government would approve its plan for economic reactivation and social protection, with measures to reduce the impact of the crisis on companies and citizens, as well as the reform of the budget to deal with Catalonia's recovery stage with guarantees. The plan,he said, includes strategic action on the issues of digitization, ecological transition and the knowledge society.

In a speech with little self-criticism of his own management, Torra insisted on demanding that the state raise the deficit ceiling, which remains at 1%, which means 2.5 billion euros for Catalonia - "it's not in our hands, it is in the hands of the Spanish government. But this Parliament can support it," he asserted. He also demanded that municipalities be allowed to dispose of their surpluses, which total about 2.5 billion euros. “It is incomprehensible that this amount remains locked in a bank account,” he argued. 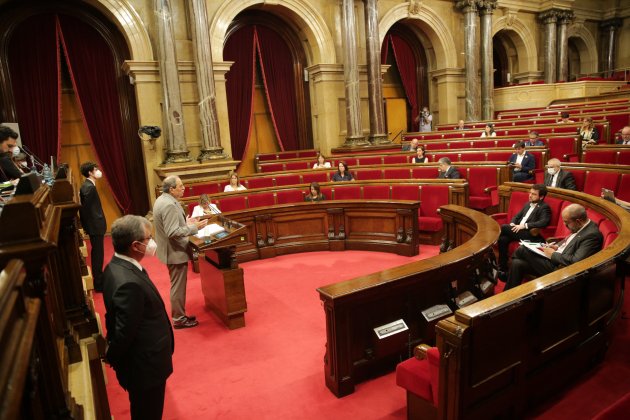 Torra during his speech before Parliament,  still half empty due to the pandemic / Sergi Alcàzar

The figures of the pandemic

After outlining the major lines of his government's work during the pandemic, and criticising the "camouflaged 155" of the Sánchez government's centralised approach to the management of the crisis, Torra addressed the effects of the pandemic - both in health and in economic and social effects. He warned that Catalonia's GDP was expected to fall by an unprecedented amount, more than 10%, and unemployment to rise above 17%, perhaps as much as 20%, with destruction of 7% of work places. The situation is "critical" according to Torra, who added: "the Spanish government cannot abandon us to the elements."

He mentioned that there were more than 98,000 ERTE temporary layoff applications had been lodged by firms, affecting 726,262 Catalan workers; 4.9 billion euros of losses had been accumulated in the retail sector; international passengers entering Catalonia had fallen 99.4% in May compared to the previous year; there was a 13.2% drop in exports in March, the lowest figure in the month of March since 2014; 5,594 cultural facilities had closed, and there was a reduction of 70-75% in logistics activity during the pandemic.

Torra explained that, according to the CEO opinion polling agency, 7.4% of the population had had to resort to financial help from relatives, 27% of the population believe that it will have difficulties or great difficulties in making ends meet, whereas before the pandemic it was 8%. Based on calls to help lines, sexist violence had more than doubled, more than 9,000 new application had been received between March and May for the Renda Garantida de Ciutadania (the Catalan government's income assistance plan), and there had been a 25% increase in applications for help from Food Bank and Red Cross programmes.

Torra made it clear that the health emergency is not over, and he stressed the need to ensure the ability to respond to possible new virus outbreaks. Specifically, he explained that the Government is preparing 80 sector plans for the different sectors.