The city council of Sant Cugat del Vallès, a well-to-do Barcelona satellite town, has this Monday declared the Spanish king Felipe VI as 'persona non grata' in its municipal area. At the same meeting, the council voted to prohibit high-emission vehicles from entering the town, as it moved to establish Catalonia's second Low Emission Zone.

The town, in the Vallès Occidental county, inland from Barcelona city, declared itself a "republican and anti-monarchist city" in the council session, according to a statement. The motion against the king was brought to the council via the local branch of the pro-independence Council for the Republic.

The initiative passed with votes in favour of the centre-right Junts and the anti-capitalist left CUP; while the other pro-independence party ERC abstained in the agreement against the monarch. As the mayor of Sant Cugat, Mireia Ingla, explained to El Nacional.cat, there were two part to the motion: the first, to declare the monarch a 'persona non grata'  and the other, to declare Sant Cugat an "anti-monarchist and republican city". 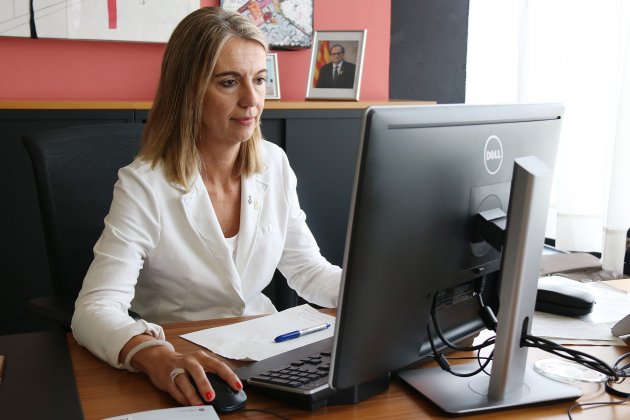 The mayor of Sant Cugat, Mireia Ingla, working in her office / ACN

The mayor indicated that her own party, the centre-left ERC (Catalan Republican Left) voted in favour of declaring the city "republican and anti-monarchist" but abstained on the other motion as "we wanted to declare the monarchy 'non grata' rather than the person." "Declaring someone 'persona non grata' only victimizes the person and does not go to the root of the problem. We condemn the monarchy per se, be it Felipe VI or anyone else," stressed Ingla.

The motion was presented by the municipal groups of JuntsxCat and the CUP. As Junts councillor Núria Fernández said, "Felipe VI, who is supposed to be neutral, does not represent us. He is the king of 'let's go get 'em'", she said, referring to the chant used by police during the 2017 repression of the Catalan referendum. "The Catalans have no king, we have no culture of vassalage and genuflection. The Spanish royal family's lack of respect to the Catalan people, saying they represent us, has reached enormous heights of selfishness and misanthropy," she asserted.

The motion argued that the Spanish monarchy, "in addition to legitimizing itself based on rights inherited from the Middle Ages, is also heir to the Franco regime; the dictator himself, before his death, chose his successor, king Juan Carlos de Borbon".

Keeping out cars as well as kings

The Sant Cugat council session also gave the green light to the municipal ordinance that will regulate a new Low Emission Zone. The system is due to go live on May 1st, but it will not be until November 1st that fines will be imposed for violations.

Vehicles not showing a low-emissions sticker will not be able to drive in the area included in the zone from Monday to Friday, 7am to 8pm. This is the first such local zone to come into operation in the metropolitan area of Barcelona, after the zone established last year by Barcelona city itself. Other Barcelona satellite towns are also working on similar schemes, with Ripollet and Sant Joan Despí most advanced in the process.

Sant Cugat del Vallès is governed by a left-wing council mixing pro-independence (ERC and CUP) and anti-independence (Socialist) parties. With a population of around 90,000, the town is often listed as having the highest average income of any municipality in Catalonia, and is one of the wealthiest in the Spanish state.