The wall of the Catalan pro-independence bloc may be showing some serious cracks, but it is set to resist the onslaught of the so-called Illa effect in the elections to the Catalan Parliament on Sunday 14th February. The PSC (Catalan Socialists) are predicted to be the largest political force, with 33-34 seats. However, JuntsxCat (Together for Catalonia), with 31-34 and ERC (Catalan Republican Left), which follows, with 29-32, should maintain their 2017 results, threatening the first place of the Socialists and having a good chance of renewing the pro-independence absolute majority in Parliament through the seats won by the left-wing pro-independence CUP (Popular Unity Candidature), which again makes a major advance with 9-11 seats. These are the forecasts that emerge from a Feedback survey for ElNacional.cat published eight days before the appointment with the ballot boxes.

The poll, based on 800 telephone interviews conducted in the first week of the election campaign, between 1st and 5th February, also shows the collapse of Ciudadanos (Cs), which was the leading force in the elections of December 21st, 2017, and now only retains 9-10 of the 36 seats it won, and as well the entry of the far right, Vox, in the new Parliament, with between 6 and 9 members. En Comú Podem (Comuns) improves its showing, with 8-10 while the Popular Party (PP) does not: 3-4. The PDeCAT, direct heir to the defunct Catalan nationalist centre-right party Convergència, would be left out of Parliament. 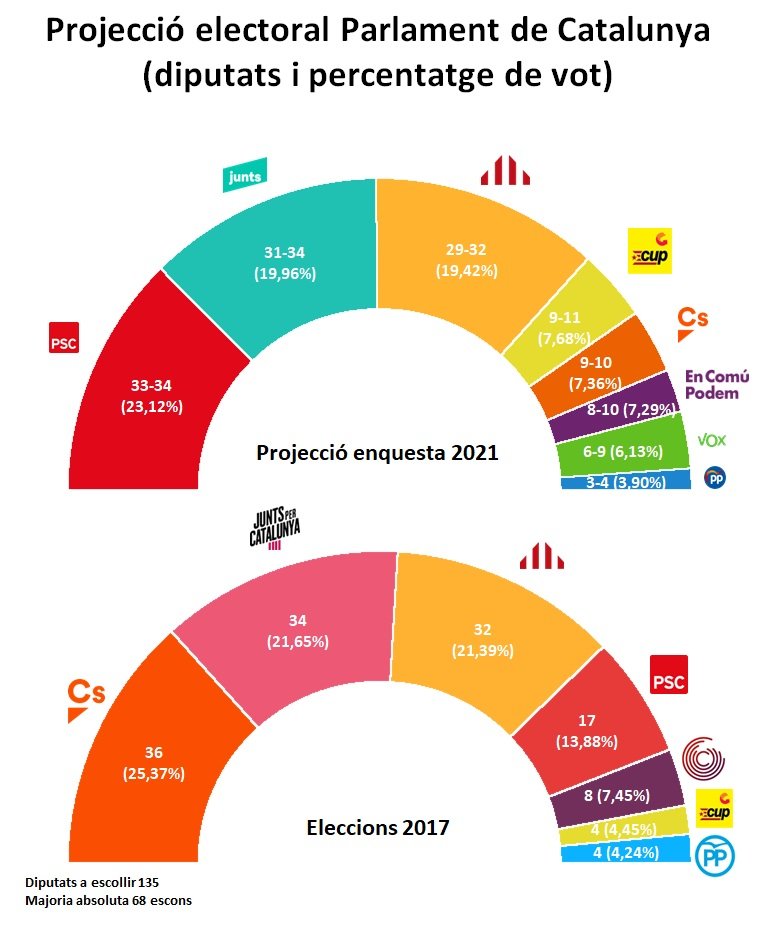 The sample expects a turnout of 61.22%, well below the historic high of 79.09% achieved in the 2017 elections and places the forecast of undecided voters at 30.7%. And this, coupled with doubts about the safety of voting in the midst of the third wave of the coronavirus pandemic - despite the reinforced health measures in polling stations - sketches a context in which uncertainty is markedly high. This is also evidenced by the fact that, although in the question of "Who do you think you will vote for?" on election day, the PSC is clearly ahead, an even larger plurality of interviewees - 38.2% - believe that ERC is the party "that will win" the election. 17.6% believe that the PSC will come first and 7.9%, JxCat.

The PSC, led since the start of the campaign by the former Spanish health minister Salvador Illa, is expected to be the winning force in the elections in votes and seats and would take over at the head of the unionist bloc from Cs, whose huge electoral tumble leaves the Socialists as the main beneficiary. Illa would double the results obtained by Miquel Iceta for the PSC in 2017, going from 17 seats to 33-34 and 13.86% to 23.12% of the vote, almost 10 percent more. Looking at the four Catalan constituencies, the PSC would be the leading force in Barcelona (22-23) and Tarragona (5), displacing Cs from the first position. The Socialists would be first in votes - something they have only previously done in the 1999 and 2003 Catalan elections - and, for the first time, in seats, albeit far from their historic maximums. However, Spanish prime minister Pedro Sánchez, the main driver of the so-called Operation Illa, would only achieve his goals in part: the pro-independence bloc will continue to have an overall majority. The poll results suggest that Illa will "do an Arrimadas" - finish first in the election without being able to lead a parliamentary majority, as Cs leader Inés Arrimadas did just over three years ago.

Below, results forecasts by Feedback/ElNacional.cat for the Barcelona and Tarragona constituencies 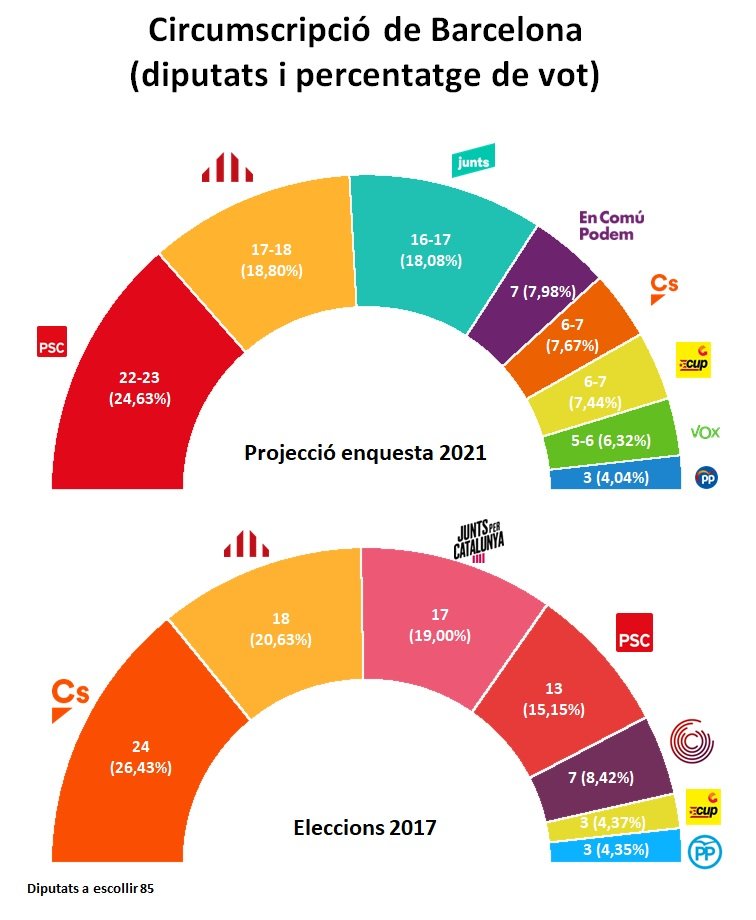 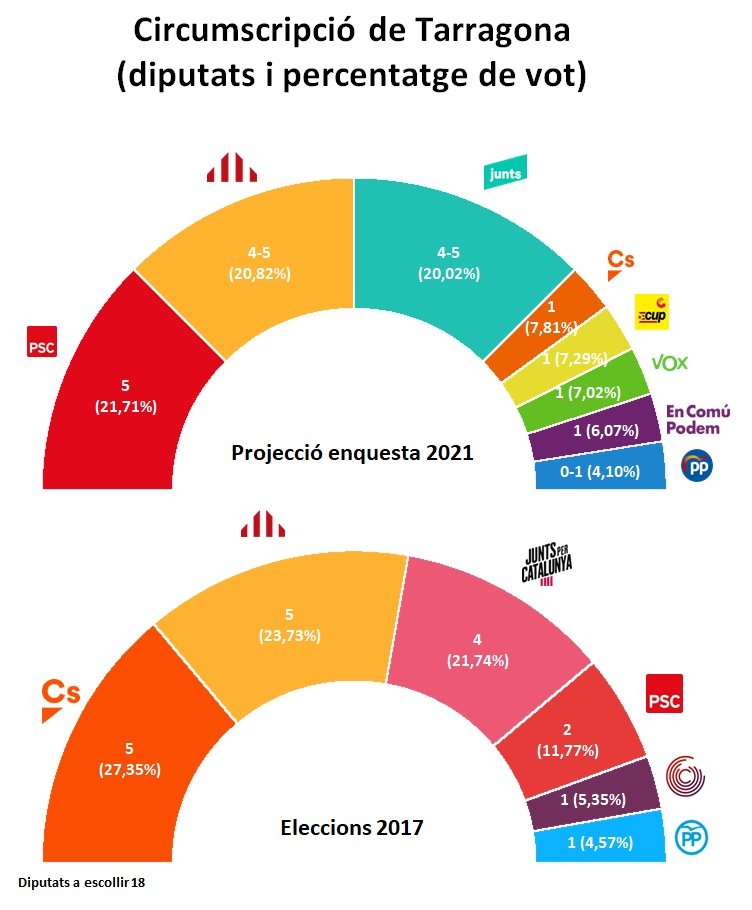 Junts per Catalunya, the party of the Catalan president in exile, Carles Puigdemont, who heads its list for Barcelona, with Laura Borràs as the effective candidate for the presidency of Catalonia, would again be the second force, with 31-34 seats and 19.96% of the vote. That is to say, in the best scenario predicted by the poll, the party would retain the same number of deputies it won in December 2017 when it stood as an electoral brand that included the PDeCat and independents; at the low end of the uncertainty margin, the party would lose 3 seats. JxCat would repeat as largest force in the constituencies of Girona (6) and Lleida (5-6). These are results with which, again against all odds, it would defeat ERC in the battle between the current Catalan Government partners for political hegemony in the independence movement.

Below, results forecast by Feedback/ElNacional.cat for the Girona and Lleida constituencies 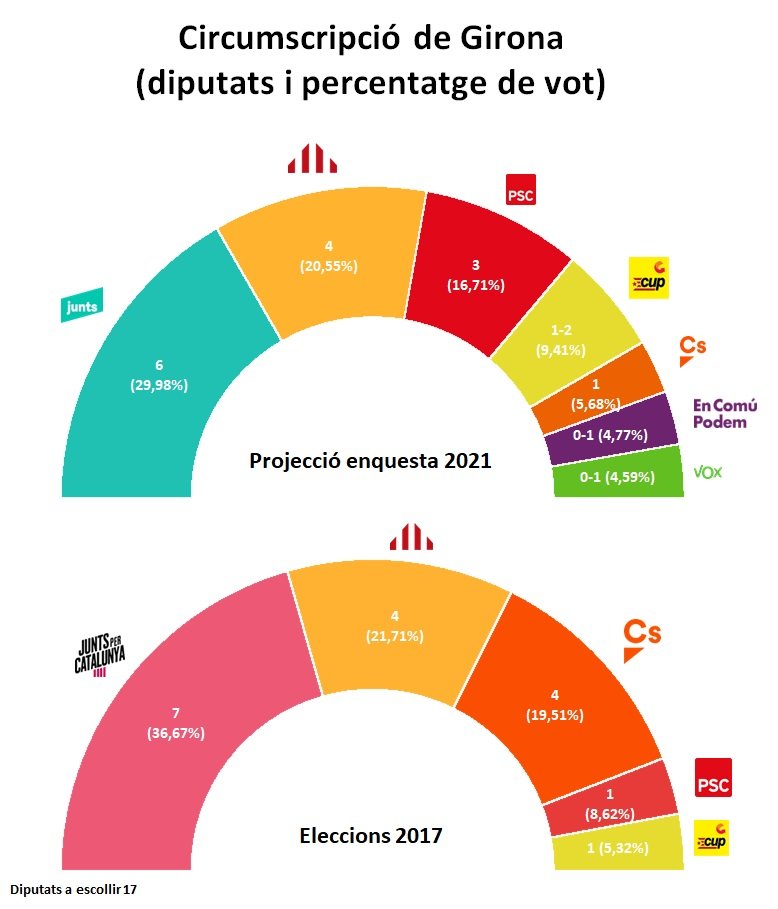 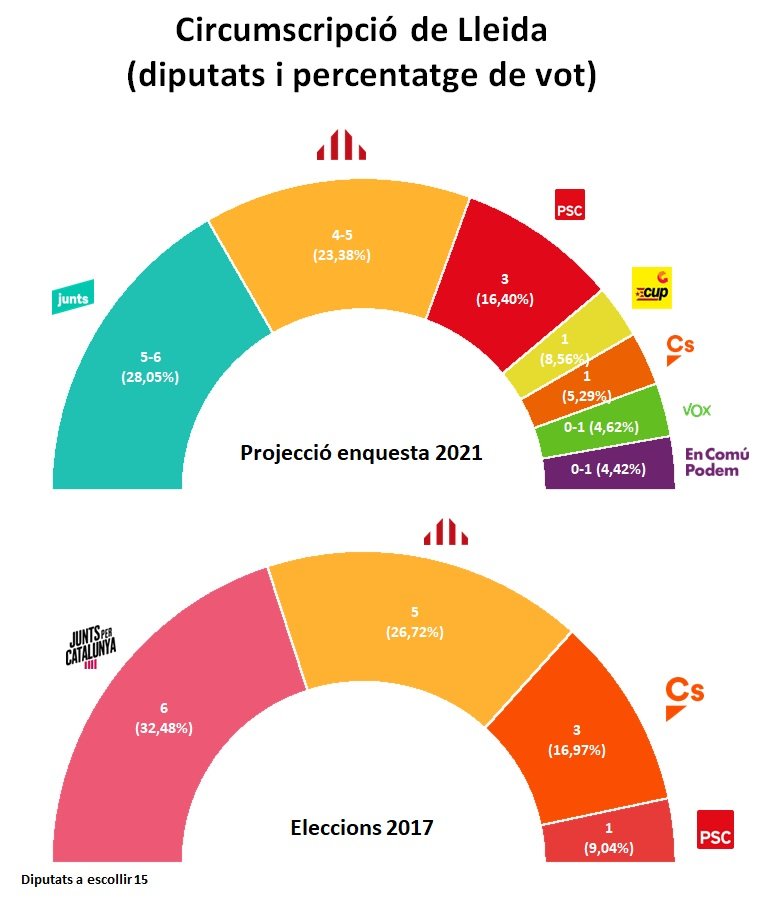 The Republican Left, led by Pere Aragonès, vice president who has been acting as president of Catalonia since the disqualification of Quim Torra last September, started as favourites in all polls but is now predicted to repeat its third place of 2017, although the technical tie at the head of the electoral classification revealed by the Feedback poll - between the PSC, JxCat and ERC - means that the party still has options to win. ERC, with 19.42% of the vote, is forecast to win 29-32 deputies, that is, it could lose three MPs, or retain all those it won in 2017 (32). The party led by Oriol Junqueras, imprisoned in Lledoners but, like JxCat's Puigdemont from exile, deeply involved in the campaign, would finish second in Barcelona (17-18), although JxCat is close behind (16 -17). ERC would also be second in Girona (4) and in Lleida (4-5), where they could tie with JxCat.

Great leap forward for the CUP

The party that makes a quantum leap in the pro-independence bloc is the CUP, which would become the fourth largest force. The left-wingers, now led by the former mayor of Badalona Dolors Sabater, leader of Guanyem, would be propelled to 9-11 deputies, with 7.68% of the vote. At the high end of this forecast, they would exceed their all-time high (10 deputies in the 2015 elections) and, at the least, would double the current total of 4.

The major voting collapse is in the anti-independence party Ciudadanos. Cs would go from the first position achieved by Inés Arrimadas in 2017 to fifth under Carlos Carrizosa. A defeat without palliatives that would result in a meagre 7.36% of the vote (down from 25.35%) and 9-10 seats, a fall of 26 to 27. The party which attracted over one million votes in 2017 would now only be the choice of 253,000 Catalans: that is, it would lose 3 out of every 4 of its 2017 ballot papers. In the Barcelona constituency, ​​where it obtained 24 deputies, it is not expected to exceed 6-7; in Tarragona the total would drop from 5 to 1. Also, in Girona and Lleida it would maintain representation at the minimum.

Comuns on the rise

Stepping on the heels of Cs is En Comun Podem. The left-wing Comuns, headed by Jéssica Albiach, with the mayor of Barcelona, ​​Ada Colau, as their best-known reference, maintain their representation in the Feedback poll with an upward trend: 7.29% and 8 to 10 seats.

Vox in the Catalan chamber

The seventh force would be Vox, the far-right party led by Santiago Abascal in the Spanish state and with Ignacio Garriga as its candidate in Catalonia. Vox will also benefit from from the collapse of the Cs vote and could comfortably form a parliamentary group if the results of the poll are confirmed, giving them 6.13% of the vote and 6 to 9 deputies. The far right, which has never had a seat in the Parliament of Catalonia, would be expected to get the majority of its seats in Barcelona (5-6), with 1 seat in Tarragona and a possibility of a seat each in Girona (0-1) and Lleida (0-1).

The PP still at the tail

The PP would continue to trail the other parliamentary parties. The emergence of Vox, on the one hand, and the legacy of Article 155 - Mariano Rajoy's 2017 intervention in Catalan self-government - prevent those in Alejandro Fernández's candidacy from progressing at all. And they could still fall further: they would obtain 3.90% of the vote and 3-4 deputies (4.24% and 4 seats in 2017, when they were already the smallest force). The PP would continue to be unrepresented in Girona and Lleida, and would see their Tarragona seat in danger (0-1). In Barcelona the party would fall from 4 to 3. A terrible balance for the aspirations of its Spanish state leader, Pablo Casado, who has been as busy as Sánchez in the Catalan campaign.

The picture, then, is of maximum fragmentation, with 8 political forces in the Catalan Parliament, one more than before. How could a government be formed? If the results of the Feedback study are confirmed, two possible governing majorities could be articulated - on paper. The current pro-independence bloc, with JxCat, ERC and the support of the CUP, is predicted to take between 69 and 77 seats - one more than the 68 needed for an absolute majority, in its most pessimistic result - which would neutralize Illa’s victory, as happened in 2017 with Arrimadas, who won 36 seats (two more than the maximum which the poll forecasts for the PSC).

The other possible majority, in theory, is a left-wing pact led by the PSC in which the Comuns and ERC take part, which would total between 70 and 76 seats. However, the pro-independence Republican Left have ruled out by land, sea or air any agreement with the Socialists. In fact, the independence movement has warned that Illa could try to be voted in as president with the parliamentary support of Vox - as Ada Colau's left coalition was in Barcelona, thanks to the rightist votes of Manuel Valls. According to the poll data, a possible PSC-Comuns pact with specific support in the investiture of Illa as president from all unionist groups from the centre to the far right - Cs, PP and Vox - with the aim of evicting the independence from the treasury benches would add up to 59 to 67 seats - not quite enough, even in its most favourable scenario.

Thus, the pro-independence bloc stands as strong as previously, or in the worst case scenario predicted by the study, it falls very little. However, despite the clear majority in seats - from the current 70 to 69-77 in the poll - and a slight advance in absolute votes, independence still fails to achieve its goal of reaching 50% of the total ballot. The sum of JxCat, ERC, CUP, PDeCat and Primàries - the five pro-independence parties standing - would win 48.18% of votes. In 2017, Junts, ERC and the CUP attracted 47.50%, although it is true that that was with an historic high of electoral turnout. On the other hand, if the calculation includes all those parties which are in favor of a referendum to resolve the Catalonia-Spain conflict, the Comuns are added to this percentage, to expand the calculation to 55.47%.

As well as the increase in non-voting, partly due to the uncertainties associated with the pandemic - 14% say they will abstain - there is also the factors of voter indecision: in the poll, a whopping 30.7% say they don't know who to vote for. This percentage is highest, at 31.2%, among those who voted Cs in the previous elections, 29.9% among PSC voters, 29.2% in JxCat, 26.4% among the Comuns and 21.7% in ERC .

Survey technical details: Area of study: Catalonia. Universe: Population 18 years of age and over registered in Catalonia and with the right to vote in elections to the Parliament of Catalonia. Method: Telephone survey with a combination of landlines and mobile phones. Sample: 800 interviews. Quotas: The sample is proportional to the variables structured by age group and gender; and the variable of Constituency is set as the fieldwork control for the selection of sample units (cities). Statistical conditions: possible total margin of error of + or - 3.54%, for an infinite population (electoral roll of 5,623,962 people), with a confidence level of 95.5%, where K = 2, and the assumption of maximum indeterminacy (p=q=50/50). Fieldwork: surveys were conducted between Monday, February 1st and Friday, February 5th, 2021.