The prisoner treatment boards of the Catalan prisons of Lledoners, Puig de les Basses and Wad-Ras, have unanimously decided that the nine jailed pro-independence leaders can be given a more open prison regime. This means that Oriol Junqueras, Joaquim Forn, Jordi Turull, Josep Rull, Raül Romeva, Carme Forcadell, Dolors Bassa, Jordi Sànchez and Jordi Cuixart will be granted the so-called "third level" of prison security, implying much broader permissions to leave their penitentiaries. After two and a half years in jail, they will now be able to walk out of the prison gates every day and only have to return to sleep. Overnight leave permissions are also extended, and they don't have to have served a quarter of their sentences to qualify for them. They can also spend the whole weekend at home.

The decision, announced by Catalan justice ministry official, Amand Calderó, comes six months after the prisons granted the lower "second level" - the standard security regime - to all nine of the political prisoners. The decision has stirred a new debate: for some it falls short, while for others it seems premature. The measure was proposed today but will have to be ratified by the prison surveillance judge. Six months ago, that ratification itself took a month, and if it then goes through, it could subsequently be appealed. Calderó recalled that in the case of the "second level" decision there was no appeal. But if an appeal began, it could be Spain's Supreme Court which would have the final say, were it to be escalated from the lower courts.

The justification from the Justice ministry

During a long preliminary to the announcement of the prisoners' new regime, Calderó stressed that the new regime was "not an exoneration from punishment. There is no third-level regime that leaves anyone free", he said. The justice official made an extensive explanation of the reasons for this more open regime to avoid igniting a new political debate, and he wanted to make it clear that the treatment boards "do not respond to political slogans."

Referring clearly to the WhatsApp message sent by the Supreme Court to journalists, Amand Calderó said that the three treatment boards had met simultaneously to "protect them from threats and coercion, to be able to work freely without anything or anyone being able to coerce them."

Calderó also ruled out any political responsibility in the decision, arguing that "the execution of the sentence is not on the table of any Catalan minister", but rather that it is a sentence of the Supreme Court and that the penitentiary system of Catalonia can do nothing else but comply and activate the measures established by law when it makes decisions on granting leave permits. "No minister's view can affect any sentence," he said.

Calderó also stated that the law is clear. And referring to Article 72.4 of the Spanish penitentiary law of 1979, he noted that it was not permitted to maintain a prisoner in a stricter prison regime if the person was suitable for a more open regime. Therefore, he remarked, the decision was strictly technical.

From second to third level

After having already spent periods of up to two years in jail on remand, the nine pro-independence civil and political leaders were sentenced to 9-14 years' jail on a major charge of sedition last October, for their parts in the 2017 Catalan referendum and independence process. Last December, the treatment boards decided for the first time after their sentencing on the prison regime they would serve. The decisions were not unanimous, but in all cases, the option chosen was the standard second-level security regime. Some board members at that time believed that the third level was more appropriate. 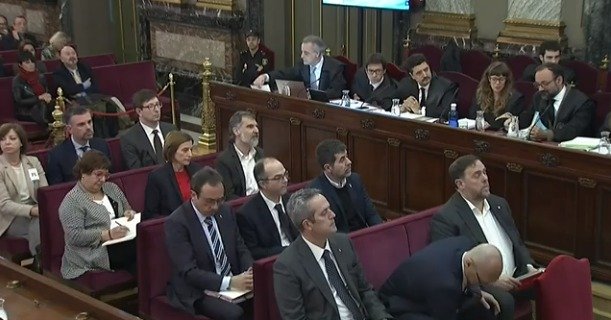 There are no specific prison "treatments" laid down for an offence of sedition. It is an exceptional and complex issue and an intense political debate is taking place behind the scenes, even between the partners of the Spanish government. In December, the pro-independence JxCat party did not accept the granting of the second level regime which the other major pro-independence party, ERC, did endorse, with the circumstance that the Catalan justice ministry, which has jurisdiction over the Catalan prisons, is from ERC.

The alternative to an open, third level regime for the prisoners was to attempt to obtain permission under another prison regulation, article 100.2, to be able to leave prison to go to work or carry out voluntary activities. That also created controversy when, during Covid-19 lockdown, despite a court order that cases were to be reviewed in order to empty the prisons and minimize contagion risks, the Supreme Court warned prison officials, via a WhatsApp sent to journalists, that allowing the Catalan political prisoners home could constitute abuse of their office. Subsequently, all three of the relevant prison boards decided that the pro-independence prisoners would not be eligible to go home for lockdown.