Through the "thick pane of glass" which separates visitors from inmates at Lledoners prison, The New York Times has this Tuesday interviewed the jailed leader of Catalonia's Òmnium Cultural association, Jordi Cuixart, presenting him as having been imprisoned "simply for exercising his right to express himself" in the view of human right groups, and noting that he is a "political prisoner" in the eyes of many countries. The leading US daily, which presents the article on its front page, reviews the events of autumn 2017 in Catalonia and explains the repression experienced by the figures who were convicted for defending their ideals and organizing a self-determination referendum in the Spanish state.

The newspaper, which recalls that Cuixart was only an activist who tried to intercede with police officers during a protest, reports the brutality of the Spanish police response to the independence movement and states that all leaders received long sentences for "draconian" sedition charges that surprised the world.

"Cuixart tried to mediate, set up pathways through the crowd and called for them to disperse, and then the independence vote was held amid the crackdown. And yet he was charged with sedition, one of the highest crimes in Spain. These draconian charges surprised everyone, even legal experts," the newspaper said. 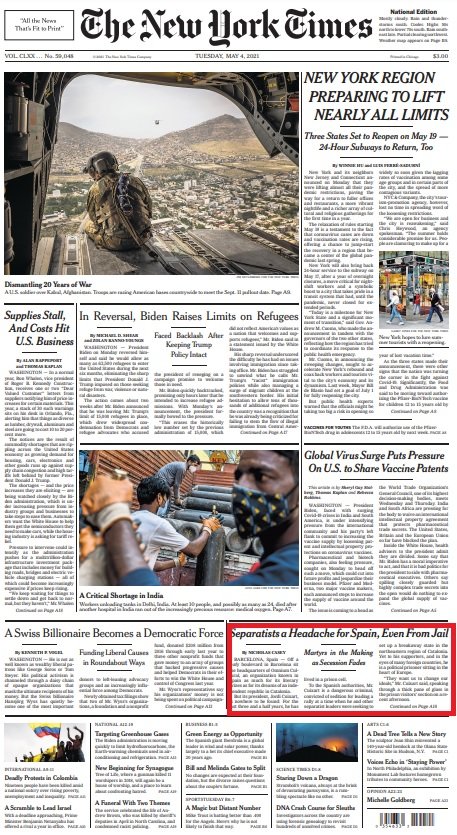 The front page of 'The New York Times' print edition this Tuesday.

While admitting that the European Union has never officially acknowledged that there are political prisoners in Spain or has openly taken a stand on the Catalan cause, it seems clear to The New York Times that this is an issue that irritates the EU: it is "a diplomatic headache, raising accusations of hypocrisy against a region known for demanding greater democratic freedoms around the world."

In this regard, the paper notes some examples that show that the jailing of the pro-independence leaders is a democratic anomaly: "Russia this year cited the Catalonian inmates to deflect calls from Europe for the release of Russian opposition leader Navalny. The United States lists the prisoners in its human rights report on Spain and calls their jailing a form of political intimidation". Even some EU lawmakers and parliamentarians have raised this situation and noted that Spain has political prisoners, and organizations such as Amnesty International take the same line," notes The New York Times.

"I would do it all again"

Thus, reports the US newspaper, Cuixart "now spends his days in a prison built for a thousand inmates, and home for convicted drug peddlers and murderers."

The article concludes with the firm statement of the president of the Catalan cultural society that he has not changed his views. "At some point, Spain will have to reflect and ask themselves what they are going to do to me. Eliminate me? They can't," Cuixart told the Times . "I'm not asking for forgiveness. I would do it all over again."