The debate was tense, as the build-up over the previous few hours suggested it would be. After intense negotiations to find a consensus within the three parties of the independence block, JxCat (Together for Catalonia) and ERC (Republican Left) passed the motion of rupture proposed by the CUP (Popular Unity) on Thursday afternoon. The final text "reiterates the political objectives" of the declaration passed on 9th November 2015, which fired the starting gun for the independence process and the creation of an independent republic, and was suspended by Spain's Constitutional Court. The vote in favour of the new motion maintains the Catalan challenge to the Spanish court - but also with Parliament's own lawyers. Ciudadanos (Cs), the Catalan Socialists (PSC) and the Popular Party (PP) did not vote, and the Commons (Cat Comú) voted against.

The debate, in fact, started with a warning from the parliamentary lawyers, which was read by the secretary of the parliamentary bureau, David Pérez (PSC). The chamber's legal services warned that a transactional amendment made by JxCat and ERC did not solve the conflicts that existed with the Constitutional Court's resolutions, and therefore advised the house not to proceed with the declaration.

A consensus on the final text had been agreed at the very last moment by the three pro-independence forces before Thursday's session and the wording chosen was a motion that asserted the “firm will to take the necessary actions foreseen and approved by this Parliament to democratically attain and culminate the independence of Catalonia”. The new motion asserted that the earlier declaration in 2015 had been made legitimate by the results of the 1st October referendum and the Catalan elections on 21st December last year.

As well, the motion calls on the Catalan government to put into effect the content of the Catalan social laws overturned by the Constitutional Court in the last few  years. The motion refers to 14 specific top-priority laws, such as the law of effective equality between women and men, the law of climate change and the law of universalization of health care. On these points, the Commons abstained.

The last point of the motion urges Torra's executive to "draft and present for approval within a deadline of six months the appropriate respective laws or norms to restore rights and freedoms". This point was passed with the votes in favour of JxCat, ERC, the Commons and the CUP. 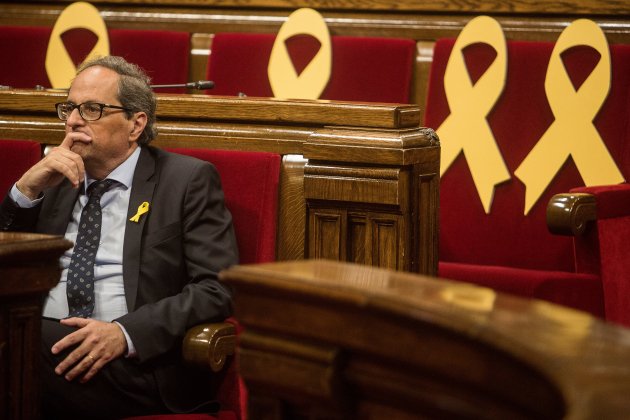 In spite of the unity in the final vote, the differences within the pro-independence parties were evident in the debate on the text. In defence of the motion, CUP deputy Vidal Aragonès put special emphasis on the social laws approved by Parliament and overturned by “the repressive action of the Constitutional Court”. On this basis, he affirmed, “there is no chance of passing social leigislation” if the parliament does not claim its “sovereignty".

In the name of JxCat, deputy speaker of Parliament Josep Costa said that he regretted that “today, thanks to the efforts the Constitutional Court, Catalonia does not have either a constitution or a Statute of Autonomy”. Costa, a lawyer, severely criticised the action of the Spanish court, which he considered to be “the origin of the problem” and which, therefore, “cannot be part of the solution”.

Meanwhile, ERC, in spite of its support for the motion, wanted to express its discrepancies with the CUP proposal. The Republicans' parliamentary leader, Sergi Sabrià, said that "we are in 2018”, not 2015, and that since then “many things have happened”. In this respect, he added that passing a motion that declares the start of a political process, when there are already prisoners and exiles, “sounds like something from the past”. He was more in favour of the recovery of the social laws quashed by the Constitutional Court. "It is not a matter of being the most pro-independence, but of those who are pro-independence being 'the most'”, Sabrià concluded, branding the motion a “symbolic gesture”. 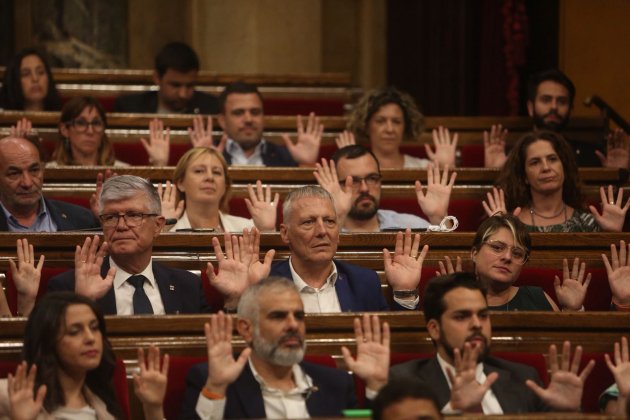 “Swept along by the CUP”

The opposition stuck hard to the warning from the parliamentary lawyers in its main counterargument. Ciudadanos spokesperson Carlos Carrizosa said it was "unprecedented”, and asserted that the motion was “illegal and unconstitutional”. He accused JxCat and ERC of “letting themselves be swept along by the CUP”, and affirmed that he has seen “people crying because they think they'll have their passports taken away from them”.

Socialist spokesperson Ferran Pedret also stressed that the 2015 declaration had been ruled as unconstitutional, but that the vote “reveals the underlying political error”. According to Pedret, this error is that there is no social majority in favour of independence.

For the Catalan branch of the PP, Xavier Garcia Albiol protested about the “clear will to continue and repeat all the decisions that caused the biggest social fracture ever experienced in our land”. He portrayed it as “Quim Torra's letter of presentation for Pedro Sánchez” for the meeting between the two leaders set for next Monday.

The Commons occupied the middle ground, taking part in the political debate – which they declared as necessary -  and in the vote, but criticizing the motion for “continuing to look backwards”. The group's Elisenda Alamany demanded that the independence parties “move from gestures to tangible actions”.