The Catalan Minister of Foreign Affairs, Alfred Bosch, has defended a new referendum agreed with the Spanish state in a letter to the editor in The Washington Post. "Catalonia has a right to a democratic solution," says the article, which reviews the confrontations between Catalonia and the Spanish state in various stages of history. 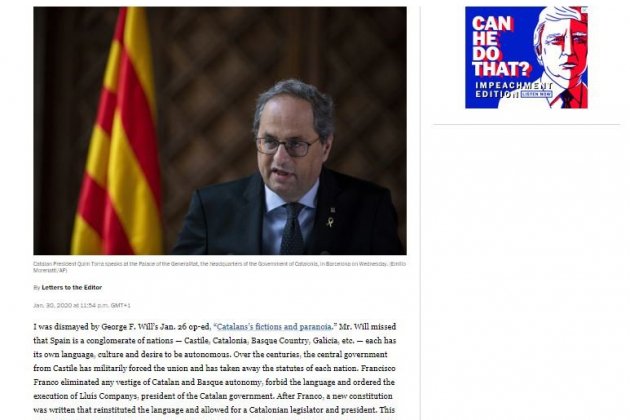 He starts with the Franco regime. "Francisco Franco eliminated any vestige of Catalan and Basque autonomy, forbid the language and ordered the execution of Lluís Companys, president of the Catalan government," Bosch reviews. He then talks about the writing of the 1978 Spanish constitution, which "reinstituted the language and allowed for a Catalonian legislator and president". However, Bosch points out that the constitution was written "under coercion of the Franco military elite" and that "Catalans voted for it because the alternative would have been to continue the military dictatorship."

In the letter, Bosch explains the current status quo arguing that Spain "has been incapable" of finding a solution to the political problem by means of politics and democracy and "has opted for judicializing the issue and jailing its political opponents", something that several international organizations, like the United Nations, have criticized.

The problem, says Bosch, lies in Spanish nationalism and demagoguery. "Listing the unity of Spain over democracy and civil rights is not proper in a modern Western society", he criticises.

The Catalan minister defines the independence project as a desire not directly linked to flags. "Catalan identity is in constant redefinition by those who live in Catalonia and those who are yet to come". He says that the Catalan people want to decide their own future through a referendum, and the fundamentals to achieve this are "inevitably dialogue and negotiation " .

Independence Referendum Torra, on another Catalan referendum: "We have to make progress, and do it again" El Nacional