Spanish prime minister Pedro Sánchez began a visit to Latvia this Wednesday at midday, and after arriving he went directly to pay his respects to those who died in the struggle for the country's independence. At an outdoor event at the country's Monument to Freedom, the Spanish leader made a floral offering. There, two people greeted him by unfurling an estelada, the Catalan pro-independence flag.

The two individuals, who stood just behind the Spanish and Latvian delegations, simply held up the flag for the five minutes of the offering, without uttering a sound. Members of the official party ignored the protest and made no gestures towards them.

Specifically, they were a woman and a man - also wearing a backpack with an estelada printed on it - who unfurled their flag while the Latvian delegation was waiting for Sánchez and his team. After the event, they rolled it up again and left. 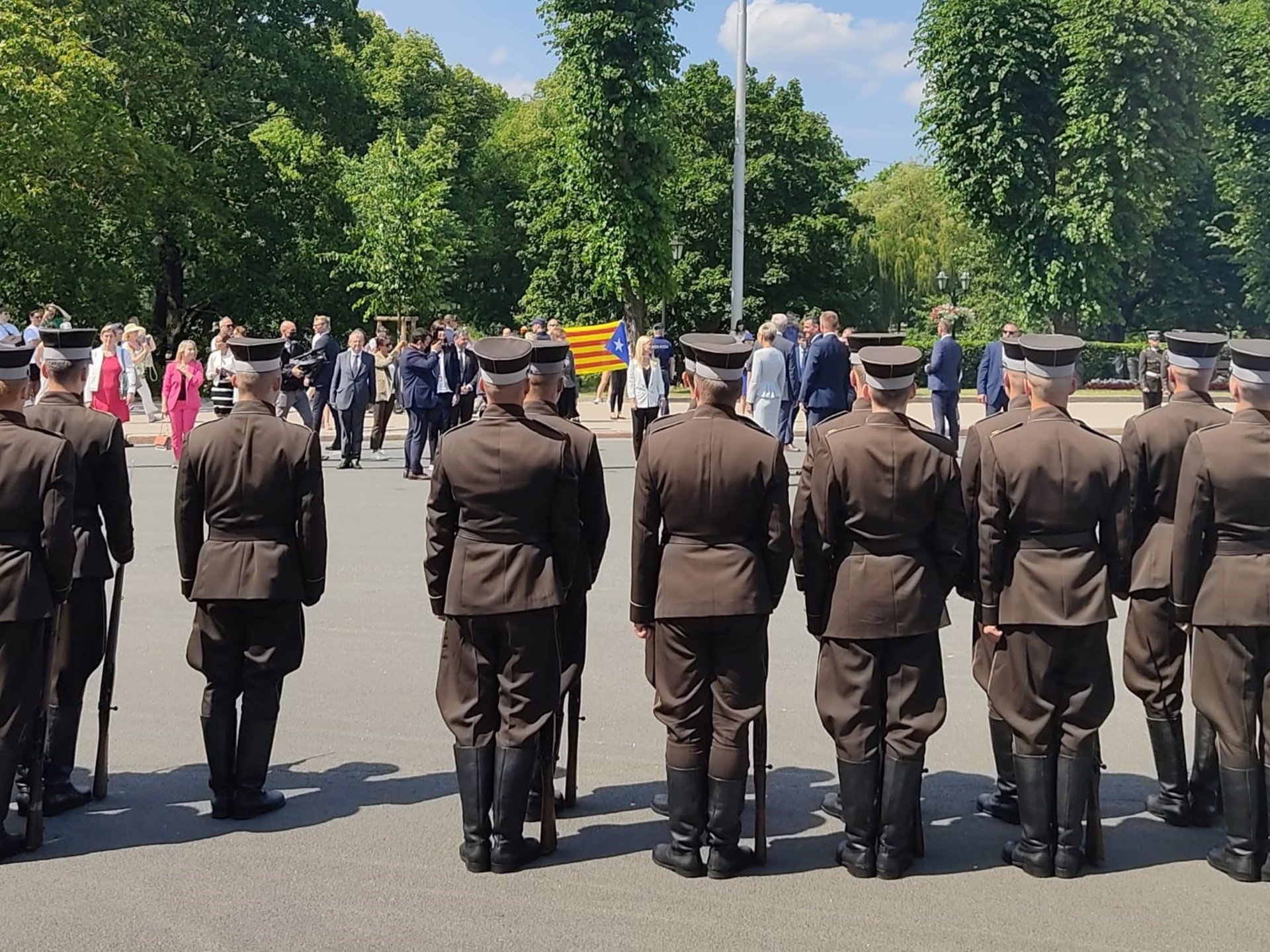 An estelada, during the floral offering at the Monument to Freedom built in 1935 in memory of the soldiers who died in the Latvian War of Independence, 1918-1920 / Europa Press

The floral offering at the Monument to Freedom to those who died in the country's early 20th century independence war was Sánchez's first public appearance when he arrived in Latvia, and for which he was accompanied by Latvian prime minister Arturs Krišjānis Karins.

At the end of the event, both went to the Presidential Palace to hold a bilateral meeting. In the afternoon, and after a joint press appearance, the two were to visit the military base of Adazi, where about 350 Spanish soldiers participate in NATO's Enhanced Forward Presence mission, whose main task is deterrence to avoid potential conflicts in Central and Northern Europe.

The Catalan conflict, "an internal issue"

Krišjānis Karins avoided commenting on the Catalan conflict during his joint appearance with Sánchez, because, in his opinion, it is an "internal" issue.

He said this when asked for his opinion on the matter, in relation to the report approved by the full Council of Europe drafted by a Latvian MP, which called on Spain to reform its law of sedition, backed the pardons for the pro-independence prisoners, and called for the withdrawal of the extradition requests against the exiled president, Carles Puigdemont. Similarly, the Latvian leader declined to comment on the Catalan flag displayed during the offering.

"There are processes that from outside can be interpreted in different ways. I think that the Catalan theme is an internal Spanish theme. And we respect the attitude of the government of Spain," he argued.

As it is an internal issue, he said, the issue must be resolved in Spain: "I, as prime minister of another government, do not intend to give recommendations on how to resolve this situation," he stressed. Sánchez did not comment on the estelada anecdote either, and Spanish government sources played down the episode.

Relations between the countries

Sánchez's visit is part of the commemoration of the centenary of the establishment of diplomatic relations between Spain and Latvia. Since Latvia's entry into the EU and NATO, bilateral relations have intensified and Spain considers that they still have great potential.

In economic terms, Spain's exports to Latvia in 2020 were worth almost 170 million euros, while those of Latvia to Spain reached a total of almost 120 million.

Latvia declared itself an independent republic for the first time in 1918 and then overcame military conflict with Soviet Russia to secure its status. It was subsequently absorbed by the Soviet Union during World War Two, but 50 years later again reasserted its independence in 1990, along with the other Baltic Republics.

Main image, Pedro Sánchez in front of the monument to those who died for the independence of Latvia with a Catalan estelada flag in the background / EFE