Close to half a million people gathered this afternoon in central Barcelona to show support for the liberation of Catalonia's jailed pro-independence leaders and also to oppose today's decision by Spain to apply article 155 of the Constitution, which suspends Catalonia's self-government. Barcelona police estimate that the crowd assembled in the city's Passeig de Gràcia boulevard and adjacent streets numbered 450,000, in a march originally called to protest against the imprisonment without bail of Jordi Sànchez and Jordi Cuixart, leaders of the key pro-independence civil groups Catalan National Assembly (ANC) and Ómnium Cultural.

Catalan president Carles Puigdemont and all his ministers marched at the head of the protest - a gesture with very few precedents. When the president arrived at Passeig de Gràcia where the march was to take place, he was received with applause and cries of "You are not alone" and "Not a single step back". Also present were the speaker of the Catalan Parliament, Carme Forcadell, and the mayor of Barcelona, Ada Colau, along with Catalonia's ex-president Artur Mas. The mayor, however, did not join the group at the head of the march.

During the demonstration, there were chants to support the two imprisoned Catalan leaders, and also calls for independence and support for the Catalan public braodcaster TV3, which is facing a takeover of its management by the Madrid government: "TV3 will always be ours" chanted the crowd in Catalan. Another slogan - this one in Spanish - was "Mariano Rajoy, you should know that I'm leaving".

The jailed leaders Sànchez and Cuixart sent a message to the protesters which was read from the stage. The ANC president asked for dialogue and to continue the independence process. "We are well, we are strong", he added. The leader of Òmnium gave a similar message and gave a defence of the right to self-determination. Txell and Susanna, partners of the two imprisoned men also came up on to the stage at the end of the huge march. 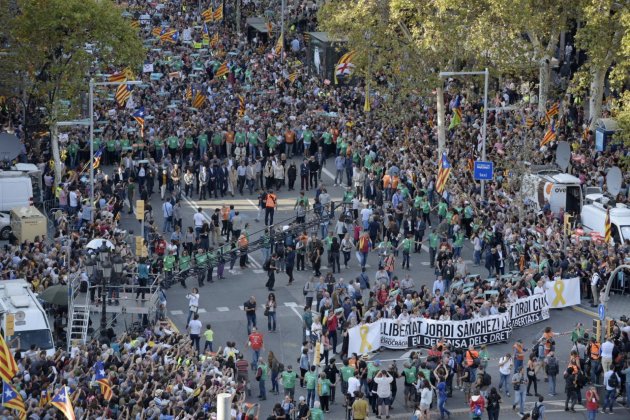